On September 11, KBS 2TV’s Monday-Tuesday drama unveiled photos of the couple having a romantic time together.

In the last episode, Philip (played by Park Shi Hoo) and Eul Soon (played by Song Ji Hyo) succeeded in having their first kiss. After Eul Soon threw away the lucky apple tree necklace, their first date saw them getting into various unfortunate situations, such as starving all day on an empty stomach and stepping on dog poo.

However, just as Eul Soon appeared as a love interest for Philip, the form of the dead Ra Yeon (played by Hwang Sun Hee) appeared at the end of the episode, just as Eulsoon said. With Ra Yeon’s entrance, a “horrible” tension pervaded the scene.

In the released photos, Song Ji Hyo and Park Shi Hoo have fun spending time with one another as they sit together on the couch watching TV at Philip’s home. Although misfortunes gradually creep up on them, they showcase a “lovely” mood as their relationship progresses. 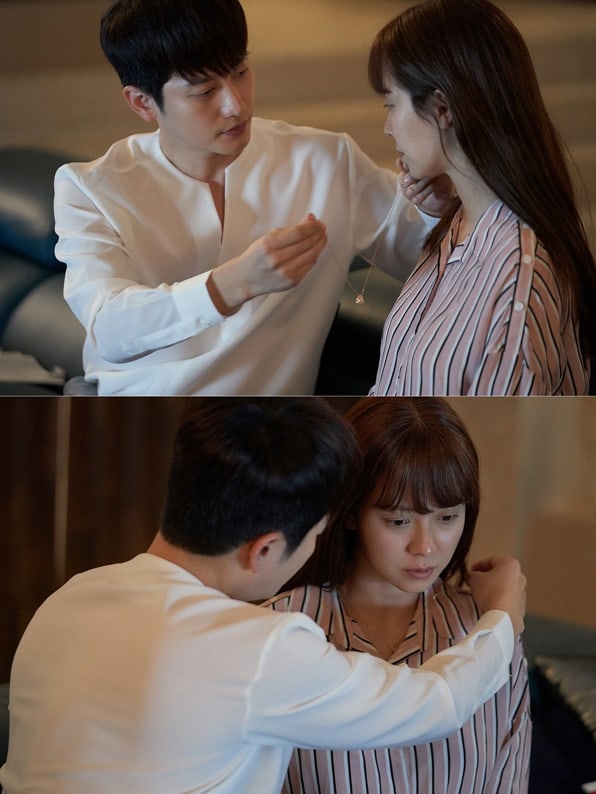 In another photo, Park Shi Hoo helps Song Ji Hyo put on the lucky apple tree necklace. Although Eul Soon had previously given up her good fortunes by boldly throwing the necklace into the sea, Philip helps her regain her luck by presenting her with a new necklace.

In the following episode, the story of Philip and Eul Soon’s past, as well as Sung Joong (played by Highlight’s Lee Gikwang) and Yoon Ah’s (played by Eunjung) previous relationship, will be exposed.

Don’t forget to check out the latest episode!