Na Hye Mi told the love story about herself and her husband Eric on KBS 2TV’s “Happy Together.”

On September 13, Na Hye Mi appeared on the show with her KBS drama “My Only One” co-stars Uee, Lee Jang Woo, and Yoon Jin Yi.

Na Hye Mi began by talking about feeling nervous about her first-ever variety show appearance. “I couldn’t sleep ever since I heard that the filming was confirmed,” said the actress. “I already get nervous, but I’m more nervous because Park Myung Soo is here.”

She continued, “I became known through ‘Unstoppable High Kick.’ I’m more of a senior actor than Uee. It’s already been 18 years since I debuted.”

Speaking about her love story with Eric, she began, “I wasn’t close at all with Eric, but he reached out first. I got a text message that said, ‘Hello. I’m Eric.’ I thought it was a joke or an impersonator, but he called me and after that we became friends. He said that he saw me in a magazine and it stayed in his memory.”

When the MCs asked if she had liked him back then, Na Hye Mi answered, “Many of my friends are fans of Shinhwa. When I was young, I was a trainee at Sidus HQ.” She laughed as she explained that she had therefore had many chances to see g.o.d instead at the time, as they were managed by Sidus HQ.

Na Hye Mi also told the story of how Eric proposed to her. She said, “We went on a trip before the wedding to rest. At the time, I was in a bad mood because we got into a small argument and he left without saying anything. He’s not usually that kind of person, so I was surprised and worried. I then began to get angrier and I just went to sleep out of anger.”

She continued, “He somehow came inside, put something in my hand, and left. When I looked at it later, it said, ‘Come outside’ on the card. It felt like he was going to propose, so I woke up, took out a white dress, and put it on. There weren’t any signs [of a proposal] a month before the wedding, and I couldn’t go out in a tracksuit. I wasn’t in a good mood, but I put on makeup in the bathroom.”

She added, “When I went outside, he was waiting for me on the white sand on the beach. Seeing that, I felt bad and sorry. He proposed to me there. When he suddenly left earlier, it had been to get flowers.” 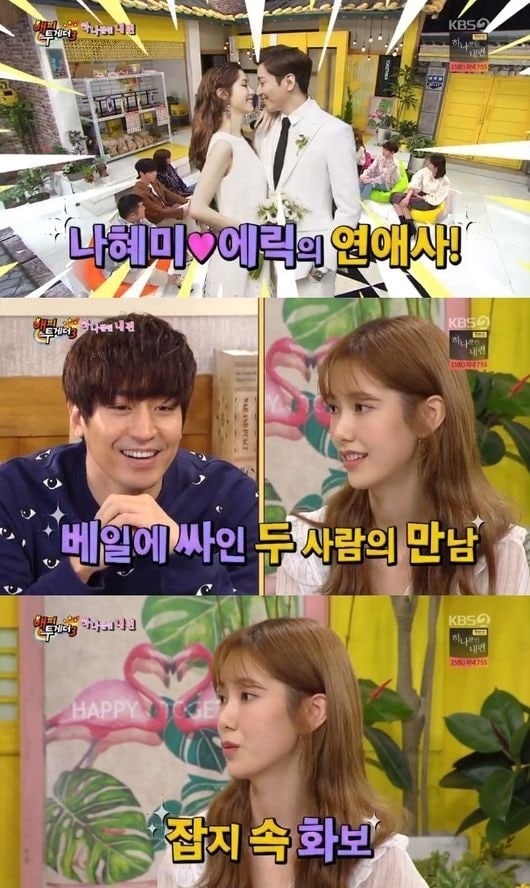 Na Hye Mi shared stories of how it felt awkward at the beginning of their marriage because she used to have a curfew of 12 a.m. and it felt like she needed to go home even though she was at home with her husband.

When asked if Eric has a curfew, she answered, “After we got married, he’s never gone out to meet with his friends at night. These days, he says, ‘You’re like me and I’m like you.'”

She explained, “We have many similarities. When we’re about to say something, there are many times where we say the same thing. We also have pet names for each other. We say ‘honey’ or since my nickname is Ham, he calls me “Hammy.’ I call him Hyuk [from his real name Moon Jung Hyuk].'”

Speaking about dealing with online bullying while filming “Unstoppable High Kick,” she said, “At the time, Jung Il Woo was really popular, so there was a frenzy when it was announced that I would be appearing as his partner. I got a lot of notes on my mini homepage that said things like, ‘Be careful at night’ and ‘I’m going to follow you and stab you with a knife.’ I suffered from malicious comments.”

About the reactions when the marriage news was announced, she said, “There were a lot of malicious comments then too. I’ve received a lot of hate for a long time. I feel hurt and sad, but I want to hear good things through this drama.”

Since Na Hye Mi and Eric are both actors, the MCs asked if her husband gave her any acting advice. She replied, “He didn’t give me any acting advice in particular, but he said to greet the staff well and to act with good manners.”

On her husband’s affectionate scenes with other actresses on-screen, she commented, “I intentionally don’t watch them. I heard that they’re very affectionate. Even if I don’t want to watch them, they keep popping up on the internet.”

About Eric’s reactions to her scenes, she added, “It’s acting. He doesn’t get involved in work-related things.”

Eric and Na Hye Mi got married on July 1, 2017 in a quiet ceremony in Seoul. Check out “Happy Together” below!

Eric
Na Hye Mi
Shinhwa
How does this article make you feel?