Watch: iKON And Wheesung Perform With Their Fans To See Who Has The Best Fan Chants

Wheesung and iKON went head-to-head on the September 14 episode of tvN’s “300.”

“300” is a variety show where musicians and 300 of their fans form a team to compete against another team to see who has the best fan chants. The winning team receives a monetary prize of 100 million won (approximately $89,163).

Wheesung said, “It feels like war,” ahead of the battle. iKON recently received lots of love for their easy-to-sing-along song “Love Scenario” and even young children participated in the show to sing along to the song.

The father of an iKON fan said that he’s been going to iKON’s concerts with his daughter. A fan of Wheesung revealed, “While practicing my vocals, I became a fortune teller. Wheesung will win this time.”

During the competition, iKON performed a remix of “Love Scenario” and “B-DAY,” which member B.I said that he stayed up all night to complete. After the performance, B.I stated, “I choked up in the middle. I hope all of you won’t forget today as well. It was more fun than performing in front of a thousand or ten thousand people.”

Wheesung was up next. He said, “It felt like 262 people threw themselves into it as if they wanted to give me something. I almost forgot that I was being judged. It felt as if I just came to have fun. I don’t think I can outdo this. I tried my best.”

The judges’ evaluations were mixed. Moon Gabi voted for iKON while Heo Cham, Lia Kim, Kim Eana, and Kim Hyung Suk chose Wheesung. As a result of the attendance and scores from the audience, Wheesung beat iKON and won the competition. 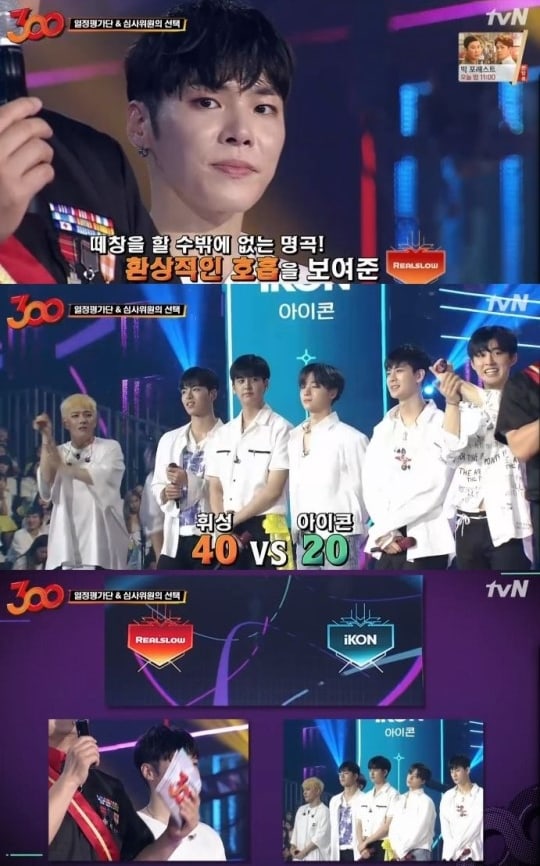 iKON
Wheesung
300
How does this article make you feel?