SBS’s “Heart Surgeons” has revealed intense new character posters that embody the essence of the drama!

“Heart Surgeons” is an upcoming medical drama about cardiothoracic surgeons who face dilemmas in both their personal lives and their careers, performing difficult operations and dealing with life-and-death situations everyday. The drama will be helmed by the production team behind the successful 2017 drama “Defendant.”

The newly released character posters feature the drama’s main cast: Go Soo, Seo Ji Hye, and Uhm Ki Joon. The three actors capture the seriousness and passion of the drama through their facial expressions alone. One poster depicts the three leads with damp hair and sweaty faces, as though they have just finished a surgery.

Another set of posters blends images of the characters crying over images of them performing surgery, symbolizing their struggle with the conflict between their missions as doctors and their own personal stories.

Each of the character’s posters bears a caption that provides a little insight into their personal lives. Go Soo’s poster reads, “The person I wanted to save the most was my mother,” revealing his character’s priorities and determination. Uhm Ki Joon’s poster says, “I’ve saved many people, but lost my only daughter,” raising the question of how his character lost his daughter and how it affects him as a doctor. Finally, the poster for Seo Ji Hye, who plays a heart surgeon with congenital heart disease, bears the intriguing line, “Someone died in order to save me.” 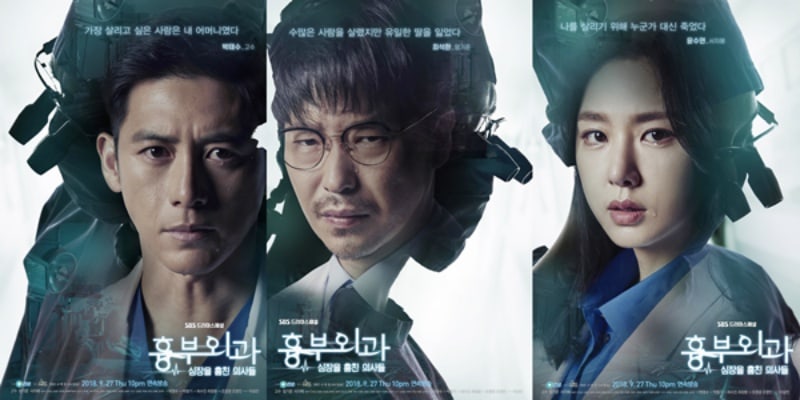 The production team commented, “The drama ‘Heart Surgeons’ will reveal the personal stories of the doctors who are struggling to save their patients even in the midst of their own real-life difficulties. It will be intriguing to watch their agony and their decision-making process when their personal experiences conflict with their beliefs as doctors. In this regard, we chose to express their anguish by making this duality the focus of the poster.”

“Heart Surgeons” will air on Wednesdays and Thursdays at 10 p.m. KST, starting on September 27. Make sure to catch the drama on Viki!

In the meantime, check out the first trailer for “Heart Surgeons” below: