On September 16, the variety show aired the final episode of its global viewers tour.

After visiting the mountain, sea, or outskirts of Korea, the cast members and their teams gathered at the base camp. Following a happy reunion, the teams competed against one another in a “four-level global tournament” over dinner.

Each team secured a different dish and enjoyed a delicious meal outside. Jung Joon Young then walked over to Kim Jong Min‘s table. He asked Kim Jong Min’s teammates in English, “Can I have one bulgogi? Because I have a gift for you.”

Turning the phone so that the fans could see Seungri on the screen, Jung Joon Young introduced them to his friend, saying, “This is my friend from France.”

Seungri waved to the fan, Linda, over the phone as she told him how she has all the BIGBANG albums at home and attended G-Dragon’s concert in Paris. “I really like BIGBANG,” said Linda. Seungri replied, “Thank you for your support.” Jung Joon Young thanked Seungri for taking the time to take the phone call and wished him a good night.

Once the conversation ended, Linda burst into tears out of happiness. Kim Jong Min said, “She’s my fan, but she’s crying [after seeing Seungri]!” When another teammate asked Kim Jong Min if he was okay, he jokingly said no and made everyone laugh. 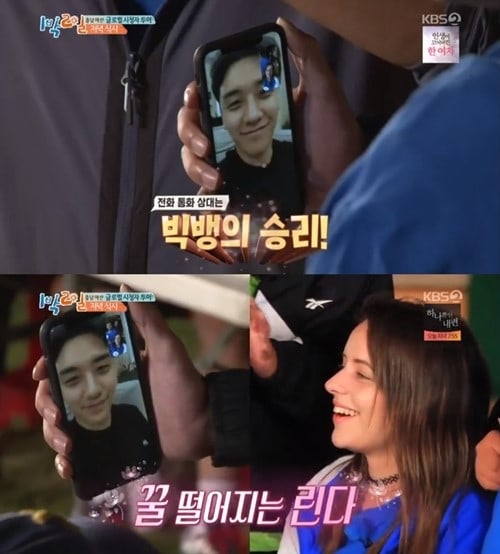 BIGBANG
2 Days &amp; 1 Night
Seungri
How does this article make you feel?