Ki Hong Lee Talks About “Maze Runner,” His Wife, And Being An Asian-American Actor On “Master In The House”

Hollywood actor Ki Hong Lee surprised the cast of SBS’s “Master in the House” during their trip to Los Angeles!

On the September 16 episode of the reality show, Ki Hong Lee met up with the cast members and hung out with them at a bowling alley, which he described as his personal hideout. He also spoke about his life and career an Asian-American actor in Hollywood.

Ki Hong Lee, who was born in Korea, briefly moved to New Zealand with his family before immigrating to Los Angeles as a child. He then graduated from UC Berkeley and pursued an acting career in the United States, starring in the popular “Maze Runner” film series as Minho. He was also named People Magazine’s No. 4 Sexiest Man Alive in 2014.

When asked about how he was cast in “Maze Runner,” Ki Hong Lee replied, “It was hard. I went to see casting directors so many times and got rejected at many auditions. Then a casting director told me that I should try out for this leading role in ‘Maze Runner.’ I wouldn’t have been able to do it if it hadn’t been for him. He told me, ‘You can do it.’ I didn’t even think that I’d be able to [get the part], but he saw it in me.”

He added, “I’m still close with my co-stars from ‘Maze Runner.’ We filmed together for five years, so we’re like a family.”

As for being named the No. 4 Sexiest Man Alive by People Magazine, the actor commented, “At first, I was really embarrassed. But then I thought about it, and I thought that it was something really important for Asians. Because people seeing the magazine and thinking of Asians as sexy will make it possible for [Asian-Americans] to have more pride and dream bigger dreams. After [realizing] that, I felt proud as well.” 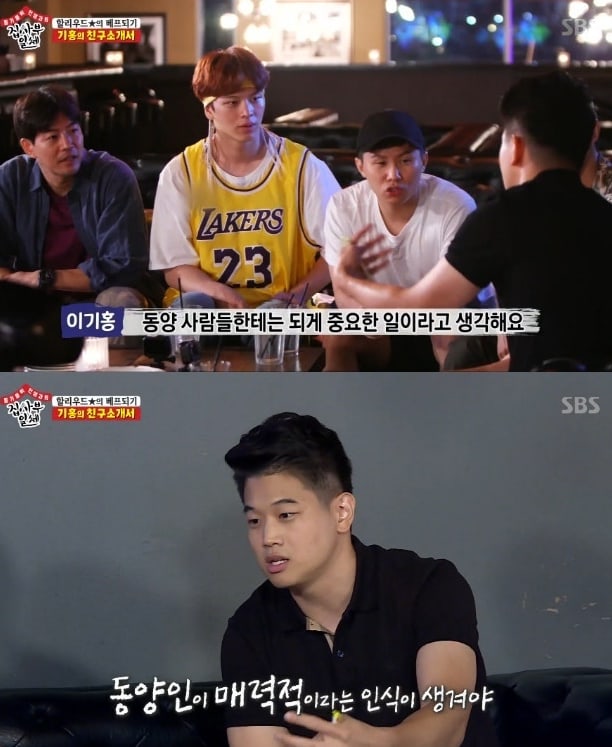 Ki Hong Lee later went on to tell the story of how he met his wife. When the cast members asked him if his wife was his first love, he cracked everyone up by answering, “Um… my first love was basketball.”

He continued, “I was friends with my wife since elementary school. We ended up reuniting after college, dating, and getting married. It was after ‘Maze Runner’ came out, so my popularity was rising, but I got married without any concerns. She’d known me since I was young, so I knew she liked me for who I was and not because I was famous.”

Ki Hong Lee also shared the reason why he didn’t change his name. “It’s the name my parents gave me,” he explained. “In history, there are many famous writers and classical composers with difficult-sounding names, but people still know them. I think that if I work hard while using my Korean name and become successful, then people will call me by my name even if it’s hard to pronounce.”

He added, “I think that changing your name to an English name after moving to America is like losing a part of yourself, but of course, I don’t think it’s a bad thing that other people choose to change their names.”

Later on, the actor humbly remarked, “I think that Korean people may think too highly of Hollywood. I think it’s similar [to the entertainment industry in Korea]. Korean films, actors, and idols are also great.”

Ki Hong Lee
Master in the House
How does this article make you feel?