Jun So Min was all smiles during GOT7’s surprise appearance on SBS’s “Running Man“!

On the September 16 episode of the variety show, GOT7 appeared as guests and participated in the final mission with the cast. The group last appeared on the show two years ago, when they raced against the cast at a train station. (Mark and Jinyoung also appeared in a separate episode two years ago to make the famous “Mark Meal” recipe.)

After GOT7 surprised the cast by stepping onto the set, the production staff explained that the group would be competing against the “Running Man” members and that whichever team won two out of three games first would win the challenge.

Before starting the game, however, Jun So Min couldn’t stop giggling and smiling as she wandered around the set. Her fellow “Running Man” members immediately noticed and began to make fun of her. Kim Jong Kook teasingly asked, “So Min, are you happy?” before pointing out, “So Min’s face has turned bright red.”

The actress shyly replied, “It’s not that, but this is my first time seeing seven male guests. I don’t know where to look.”

Kim Jong Kook laughed, “Look at the camera! What do you mean you don’t know where to look? You can look at the camera.” Lee Kwang Soo commented, “She keeps tucking her hair back [behind her ears],” and Yoo Jae Suk joked, “So Min, your ears are bleeding [from tucking your hair back too much].” 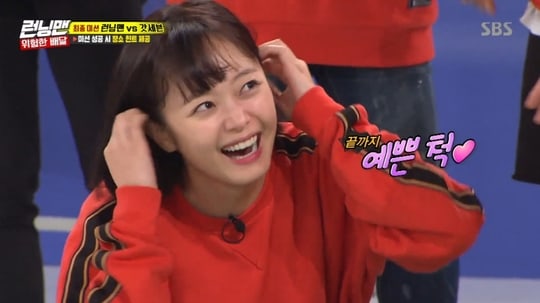 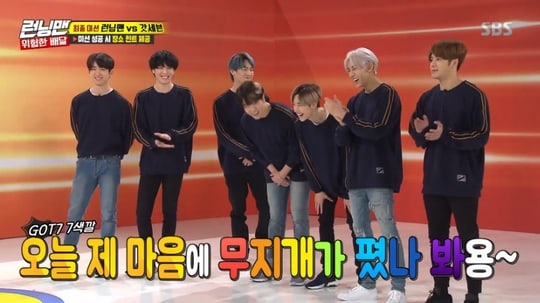 GOT7 and the “Running Man” cast went on to compete in a game of “toe” long jump. Jackson beat Kim Jong Kook’s record, and the boy group was crowned as the winner.

GOT7
jun so min
Running Man
How does this article make you feel?