GOT7’s JB Opens Up About His Parents’ Divorce

When he wakes up the next morning, he doesn’t remember any of this and repeats this throughout the week. Her dad even signed a contract with her mom saying that he’d stop drinking, but broke the promise within a day.

She said that her parents frequently argue and spoke about how she was worried that all of this may lead to their divorce. While crying, she added, “My heart hurts when I see my mom crying.” Her younger sister said, “My mom says she feels like she might die because she’s so tired. I’m scared they’re going to divorce. I just want [my dad] to not torment us after he drinks.”

Their mom said, “When he drinks and comes home, she calls me and says, ‘Mom, just divorce him.'” The daughter explained, “It’s so scary when my mom and dad fight.”

JB and Cheetah sympathized with this story. Cheetah commented, “Like you, my dad also frequently drank before he came home. At the time, I disliked him. But now that I think about, I think my dad was lonely.”

JB said, “My family was like that. In the end, my parents got a divorce and now I live with my mom and step-dad.” He continued, “When I used to hear them argue, I’d think, ‘Oh, why are they fighting?’ and become more careful. I became more afraid, and this has a large effect on kids.”

In the end, the cast and guests took turns stating whether or not they believe her issue is a concern. Both GOT7 members said that this was a concern. Jinyoung said to the dad, “I hope this can be a time where you think about what’s most important.” JB stated, “I think that this is a really big concern.” 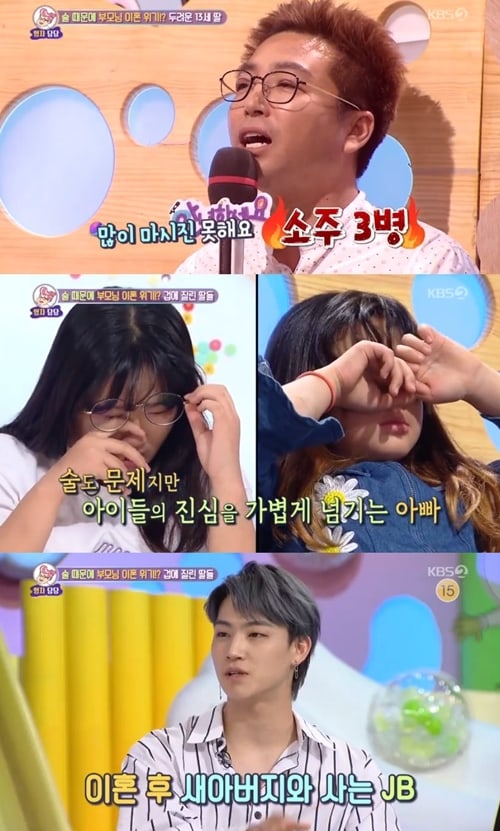 GOT7
Hello Counselor
JAY B
How does this article make you feel?