So True It Hurts: 7 Relatable Moments From College K-Dramas

College offers unique experiences regardless of age or geographical location. Some experiences are awesome, such as parties, roommates, and classes. And some are awful…such as parties, roommates, and classes. Even though the students are older than they were in high school, humans are still humans, and we have a way of doing cringe-y and embarrassing things no matter where we are in life.

No matter what your college experience is, was, or will be, know this: you are not alone! And if you didn’t go to college or haven’t gone yet, this list is still for you. Because — like I said — humans are humans no matter what environment we’re in, and whatever you’ve done, chances are someone else has done it too…and probably a lot more awkwardly.

So without further ado, here are seven relatable moments from college K-dramas that are so true to life they almost hurt. Almost.

1. When you’re at the mercy of that friend who has a car

Or, in this case, that friend whose wealthy father has a car. In “Because It’s The First Time,” charming and outspoken Tae Oh (Choi Minho) is chatting with his close-knit group of friends when one of them suggests going on a picnic later that week. Of course, everyone is happy to agree to the plan, but they quickly realize they’ll need a car. They suddenly all get very quiet and turn to look at Tae Oh. 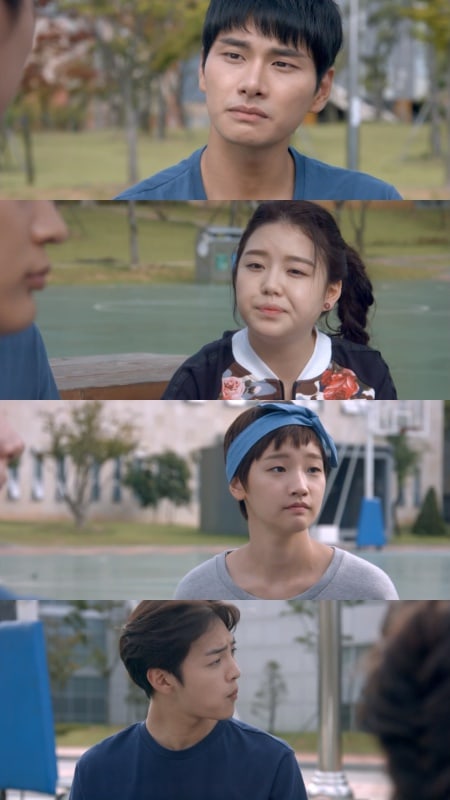 Guess who gets stuck taking care of transportation. But who could say no to those faces? The moment Tae Oh realizes his fate as he looks around at his friends is hilarious, and super accurate. Whether you’ve been the friend hoping to hitch a ride or the one who’s inevitably stuck doing the driving, this situation hits home for university students all over!

Catch episode 1 of “Because It’s The First Time” right here!

2. When you pretend to be extremely busy after you’re caught eavesdropping

In “Heartstrings,” talented musician Lee Gyu Won (Park Shin Hye) enters the crowded campus library and quickly settles down in an empty seat across from the popular Lee Shin (Jung Yong Hwa). Shortly afterwards, a girl approaches him with a gift, and he mumbles that he was hoping to sleep in peace. As the girl chatters on, Gyu Won listens in and mutters under her breath that it’s no wonder he came to the library to sleep. She watches in judgment as the girl leaves — and when she turns back to her work, she realizes she got busted. 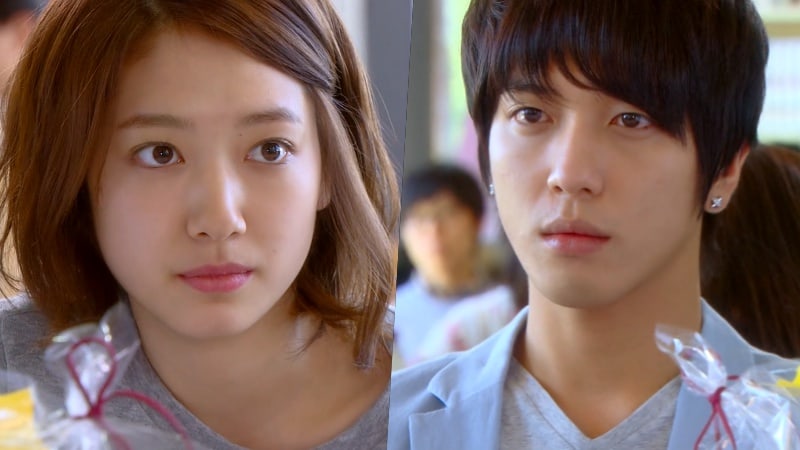 Her response is so cringingly accurate because who hasn’t done the frantic and embarrassed rush to look incredibly busy all of a sudden (while trying to sneakily make sure they’re not still looking at you)?

3. When you’re so broke you resort to stealing coins from the wishing fountain

Hey, desperate times call for desperate measures, right? And no one feels the struggle more than competitive college swimmer Jung Joon Hyung (Nam Joo Hyuk) in “Weightlifting Fairy Kim Bok Joo” as he gets busy collecting coins in order to buy a bottle of water (it’s so sad…and so dismally familiar). After collecting enough, Joon Hyung thanks the fountain, saying that he’ll use the coins well, and flashes the Nam Joo Hyuk smile we all know and love. I think he’s forgiven. 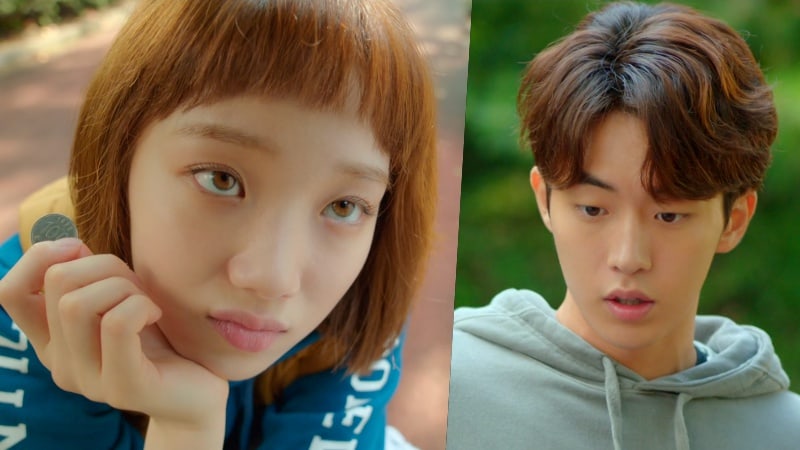 But as soon as he turns around, he finds himself face to face with fellow student Kim Bok Joo (Lee Sung Kyung), who has witnessed the whole thing and totally calls him out on it. And if there’s anything worse than unabashedly taking coins from a fountain so that you can buy water, it’s being caught in the act by someone you don’t currently get along with.

4. When you mad-rush to sign up for classes with your favorite professors

No college K-drama list would be complete without “Cheese In The Trap,” and even though this one has a lot of relatable student life moments, one of the best is when kindhearted Hong Seol (Kim Go Eun) coolly walks up to her two best friends (Nam Joo Hyuk and Park Min Ji) and suddenly grabs each by the arm to start booking it across campus. At first confused, the others soon realize: class sign-ups are open and they need to each secure a spot in the computer lab so that they can sign up for the best professors and classes!

Maybe not all of us have had to do a physical rush across campus for this one, but it’s a universal college rite of passage to have to take a class that you didn’t want, with a professor that’s not your favorite. So when the opportunity to have a say in these things comes your way, you’ll do anything — including dragging your friends along with you — to make sure you get the best of the best.

Catch episode 1 of “Cheese In The Trap” right here!

5. When you pretend to follow along in class and get called out on it…by the professor

In “Twenty Again,” middle-age mom Ha No Ra (Choi Ji Woo) sits in the back of the classroom on the first day of her classes. When the professor, Cha Hyun Suk (Lee Sang Yoon), asks the students to raise their hands if they were not aware of a certain condition for his class, No Ra (who was not aware of said condition) keeps her head down and doesn’t raise her hand in order to blend in with the rest of the students. However, the professor calls on her — how do they always know? — and asks point-blank if she knew about the condition before signing up for the class. 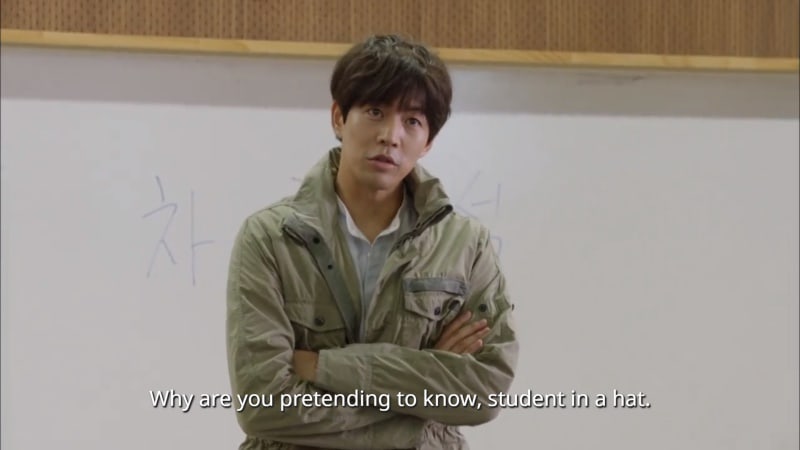 She freezes up, and he correctly states that he believes she didn’t know. So, why did she go along with everyone? Her look is so telling of the cringe she’s feeling inside — and it’s definitely one a majority of college students have felt before!

6. When you realize college is not the break from schoolwork (or life problems) you were hoping it would be

This sobering realization is enough to make you sit down on a park bench and really reevaluate how you’re spending your time. Which is exactly what Hae Tae (Son Ho Jun) does as he confides in close friend and housemate Sung Na Jung (Go Ara) in “Reply 1994.” He tells Na Jung that during the days of college entrance exams, his mother told him that everything would be easier after high school, as there wouldn’t be any more huge tests in his life. But he confesses that every day is like an exam to him, especially with his clingy and jealous girlfriend constantly testing his patience. 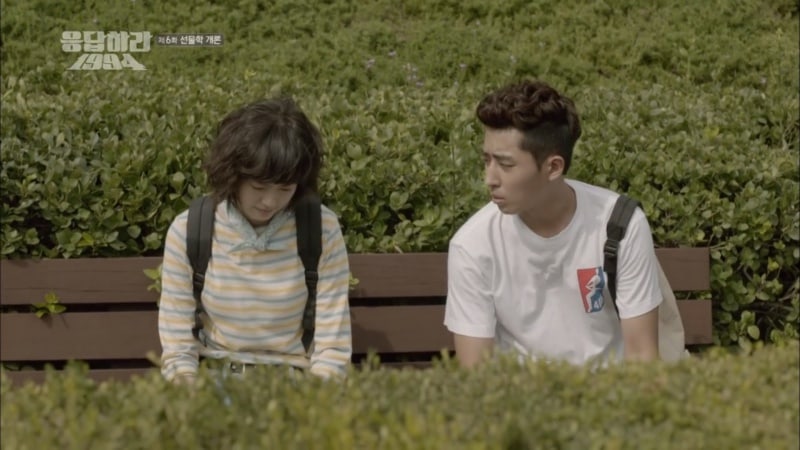 After earnestly laying out his troubles, Hae Tae asks Na Jung for advice, to which her reply is also one a lot of college students can relate to: 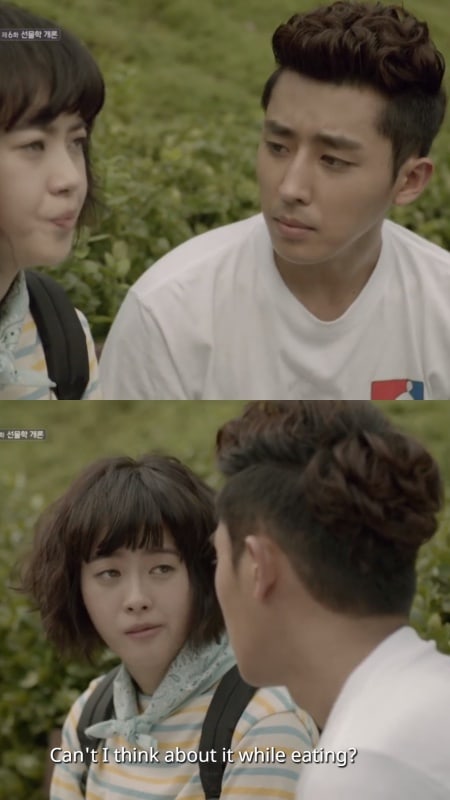 Because food is incredibly relevant while discussing life matters, as Na Jung knows full well. Although the drama portrays it in a light manner, Hae Tae’s feelings are something most every college student feels at one point or another — maybe it’s not as easy (or as difficult) as you thought it would be, maybe you haven’t made as many friends as you thought you might, or maybe you’ve got way more friends than you’ve ever had before. Either way, college is a unique time period in life, with a lot of unknown factors thrown your way! So it’s always great to know that you’re not alone.

7. When you rush in into class horribly late…and the door is in the front of the classroom

If this one has happened to you, you know how utterly mortifying this feeling is. The only thing that could make it worse is if you missed an enormous exam…which unfortunately is the case for poor (and completely a-dork-able) Kim Hong Sik (Shin Jae Ha) in “Traces of the Hand.” When the professor tells him class is practically over, he offers up the golden excuse we’ve all given before: his alarm didn’t go off. 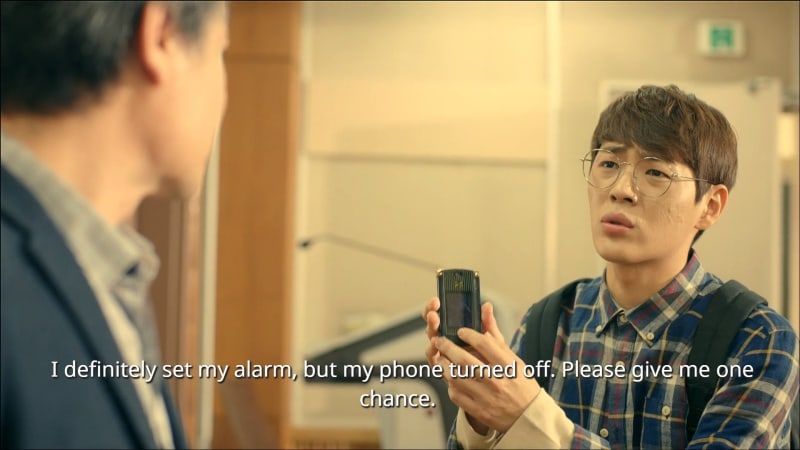 Incidentally, he’s telling the truth — but I doubt the hours of gaming with his buddies helped his case. Thankfully, he’s allowed to take the exam, which is probably more than can be said for most of us who have scrambled into class super late before.

Catch episode 1 of “Traces Of The Hand” right here!

Which moment do you find most relatable, Soompiers? Let me know in the comments!