Super Junior’s Leeteuk opened up about his health since he received emergency surgery earlier this year.

The most recent episode of MBN’s “Realistic Men and Women 2” (literal title) followed Leeteuk as he went to get his first comprehensive medical checkup. While filling out his forms and going through the process, Leeteuk also opened up about how he’s been doing since receiving emergency surgery for gallbladder inflammation in July.

He stated, “Since being that sick, I’ve started to take a closer look at my own health. So I’m going for my first-ever comprehensive medical checkup.” Leeteuk went on to reveal, “I lost about 10 kilograms after the emergency surgery. I used to weigh approximately 65 kilograms when I was working out, but I’ve dropped to around 55 to 56 kilograms. I think I need to gain some of that weight back. It made me think that I really need to take better care of my health.” 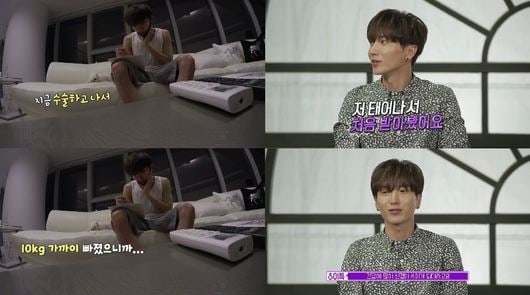 Leeteuk had flown in from a different overseas activity the day before the examination, and he looks more tired than usual. He stated, “I’m nervous because this is my first checkup. A lot of thoughts are filling my mind. Work is important, but I need to look after my health as it’s gotten precarious due to stress and overexertion.”

Luckily, his medical examination revealed that he was in good health. The doctor explained that the small health problems Leeteuk did have could be solved by changes to his diet and exercise, and Leeteuk left the hospital feeling much better about himself.