“Where Stars Land” Impresses With Strong Lineup Of Supporting Actors

The upcoming Monday-Tuesday drama will star Lee Je Hoon and Chae Soo Bin as employees of Incheon International Airport who meet on the job and end up falling in love. Lee Je Hoon will play the role of Lee Soo Yeon, a mysterious new employee who is hiding a secret, while Chae Soo Bin will play Han Yeo Reum, an accident-prone employee with a sorrowful past.

“Where Stars Land” will also feature Lee Dong Gun as Seo In Woo, the ambitious and charismatic head of the operations department, and Kim Ji Soo as Yang Seo Goon, the workaholic head of the passenger service department. SF9’s Rowoon will be playing Go Eun Seob, an employee who was hired at the same time as protagonist Han Yeo Reum.

However, not only does “Where Stars Land” boast a strong starring cast, but the drama’s supporting lineup is chock-full of talented character actors and scene-stealers who can bring even the most minor roles to life. 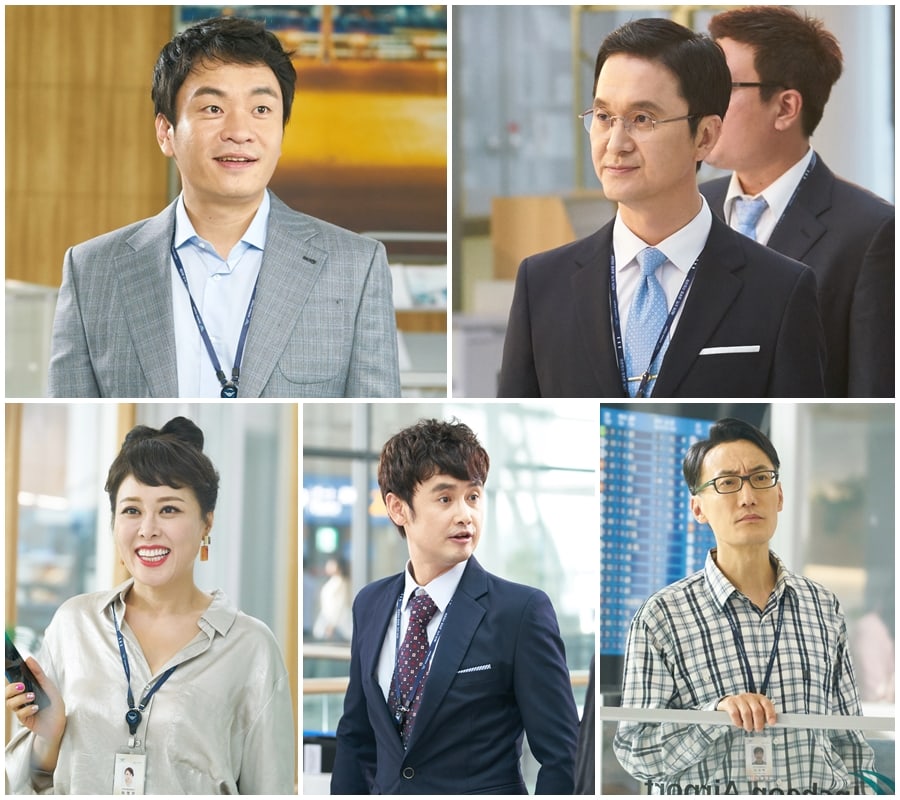 Lee Sung Wook, who recently garnered praise for his performance in the hit drama “Misty,” will be playing the role of Choi Moo Ja, the head of security at Incheon International Airport. Despite always wearing a smile on his face, there is a chilling air of mystery surrounding Choi Moo Ja, who shows an impressive ability to always think one step ahead.

Jang Hyun Sung, who has appeared in a diverse array of films and dramas (as well as the hit KBS reality show “The Return of Superman“), will be playing the role of Kwon Hee Seung, a cold, calculating executive who is gunning for a promotion.

Hong Ji Min, one of the early champions of MBC’s popular singing competition “The King of Mask Singer,” will be appearing in the drama as the smooth-talking Heo Young Ran, who is engaged in a fierce ongoing rivalry with her colleague Yang Seo Goon.

Actor Ahn Sang Woo, who recently appeared in the dramas “Prison Playbook and “Secret Mother,” will be playing Gong Seung Chul, a passenger service department executive who drives his co-workers crazy with his micromanaging tendencies.

Finally, Jung Jae Sung will be rounding out the cast as Lee Woo Taek, the head of the transportation services department and Han Yeo Reum’s former boss. Despite his deceptively boring appearance, the character is a legend at the airport and is often referred to as a “crazy dog.”

The producers of “Where Stars Land” commented, “Starting from the very first table read, the experienced supporting cast took hold of the room with their fiery, passionate acting. Please look forward to their fast-paced, ping-pong dialogue and acting.”

“Where Stars Land” premieres on October 1 at 10 p.m. KST and will be available with English subtitles on Viki.