MBC’s upcoming Wednesday-Thursday drama “Terius Behind Me” has shared new stills showing how Son Ho Jun and Jung In Sun interact on a daily basis.

“Terius Behind Me” will tell the story of a legendary black ops agent who goes missing and a single mother who finds herself in the middle of a war of espionage.

Jung In Sun will be playing Go Ae Arin, a single mother to a pair of twins who has to return to the workplace due to an unexpected situation. She ends up working for Son Ho Jun’s Jin Yong Tae, the head of luxury brand import shop J International with a dark secret, and the actor is getting ready to show a new side of himself that goes beyond a conventional antagonist. 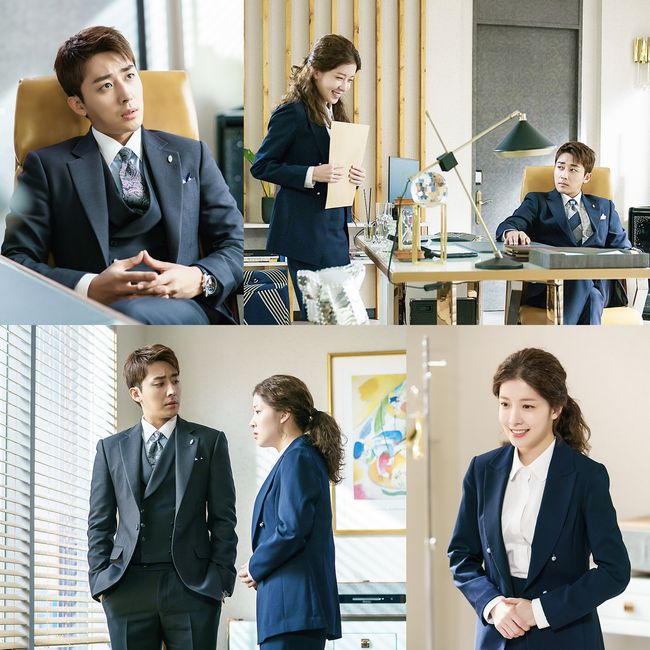 Jin Yong Tae is something who only cares about himself and what is good for him, without giving a second glance to anything that happens to others. He isn’t too pleased when his office, which he considers his private space, is invaded by a determined Go Ae Rin and he does his best to chase her out. However, Go Ae Rin is used to antics as she’s been raising an energetic pair of twins, and she is able to react to every outburst by Jin Yong Tae with a smile.

The two actors are set to bring the laughs as a boss with a secret who tries to keep his distance and his employee who seems ready for anything he might throw her way. Their chemistry will be on display when “Terius Behind Me” premiers on September 27 at 10 p.m. KST.

Son Ho Jun
Jung In Sun
Terius Behind Me
How does this article make you feel?