“Where Stars Land” is about a mysterious elite rookie named Lee Soo Yeon (played by Lee Je Hoon) and a first-year employee named Han Yeo Reum (played by Chae Soo Bin) who frequently gets in trouble while working at Incheon International Airport. The two colleagues will help heal each other’s wounds while going through their day-to-day duties at the airport.

In the latest stills released on September 28, Lee Je Hoon protects Chae Soo Bin from a passenger who’s about to hit her with a part of the retractable stanchion. Lee Je Hoon embraces her with one arm while blocking the attack with the other.

Lee Je Hoon remains composed throughout the ordeal while holding Chae Soo Bin while she looks understandingly nervous. He also stares at her, who has tensed up due to the attack. This incident will help form a connection between them that will eventually grow into a special romance.

A source from the drama said, “Through this scene, Lee Je Hoon and Chae Soo Bin’s fateful romance officially begins. It will make viewers feel new kinds of emotions. Please look forward to the chemistry between the two people who are drawn to each other like magnets, and the special stories that will warmly knock at your hearts this fall.” 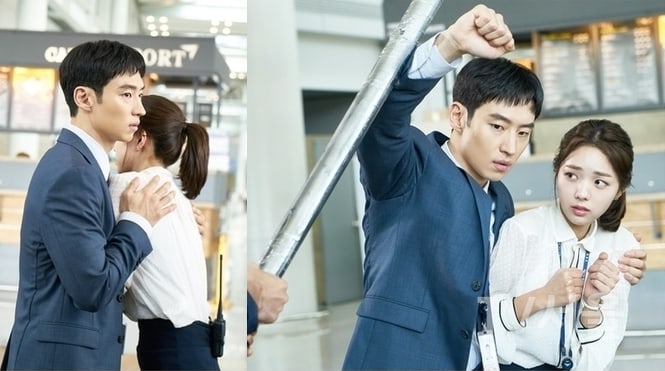 “Where Stars Land” will be the first Korean drama to tell the story of the passenger services who function as the heart and lungs of the airport.

The drama will premiere on October 1 at 10 p.m. KST, and will be available on Viki! In the meantime, check out the teaser with English subtitles below: