On September 28, Ku Hye Sun appeared as a guest on the variety show and visited filming locations for famous films in Gangwon Province while discussing her life experiences.

Once the hosts and Ku Hye Sun reached their final spot, which was the filming location for the film “One Fine Spring Day,” they asked her what she thinks love is.

“I’m not really sure what love is,” she answered. “You can’t see it or touch it. I lived my whole life while thinking that love doesn’t exist. That I don’t have love, but I trust myself. Because I trusted this person rather than love, I think I tried to go with this person.”

Talking about her short film about love, Ku Hye Sun said, “I filmed something similar to this. I filmed a short film called ‘Mystery Pink.’ A man has his girlfriend’s body and it’s the conversation [between them] when her family comes to get the body. The family who came to retrieve her body consists of her past and present. In the end, the person who I love is my self-portrait.”

She continued, “After I got married, I was watching him and it turns out that I was doing [the same things] if you observed me. ‘I’m living with the same person as me.’ We also filmed an observation reality show [‘Newlywed Diary’] and I was really surprised at how he and I appeared because we were so similar. The person I like is reflected in me.” 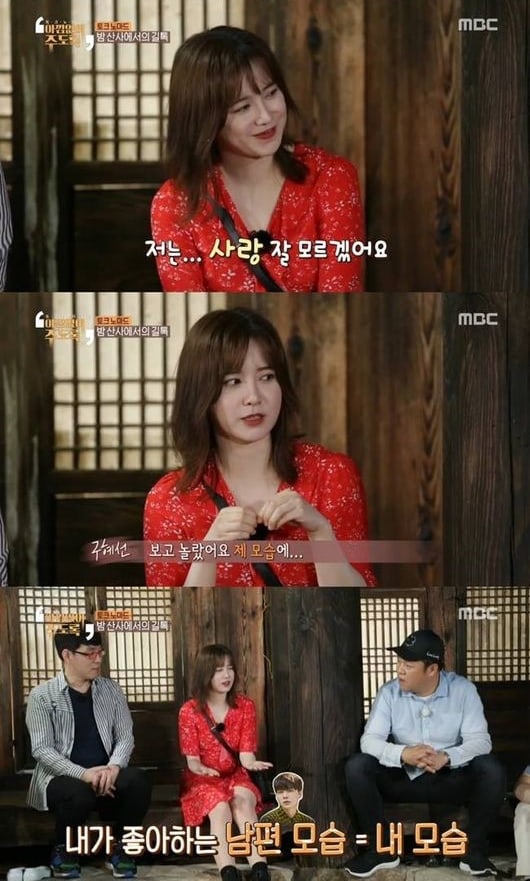 Check out Ku Hye Sun and Ahn Jae Hyun in “Newlywed Diary” below!