“Where Stars Land” is about a mysterious elite rookie named Lee Soo Yeon (played by Lee Je Hoon) and a first-year employee named Han Yeo Reum (played by Chae Soo Bin) who frequently gets in trouble while working at Incheon International Airport. The two colleagues will help heal each other’s wounds while going through their day-to-day duties at the airport.

Lee Dong Gun plays the role of Seo In Woo, the head of the operations department at Incheon International Airport and a “young heavyweight” who is on the fast track to success. With his killer charms, Lee Dong Gun will simultaneously hold a flexible wit and inspire tension in the drama.

On September 29, images of Lee Dong Gun at the airport were released. In the photos, he plays Seo In Woo, who makes his first appearance in the drama as he arrives at Incheon International Airport. Although he usually boasts a “suit fit,” he displays a more casual image with his beige trench coat and black slacks. With both his “flower boy visuals” and great proportions, he shows up at the departure area to announce the appearance of the “two-faced ambitious man.” 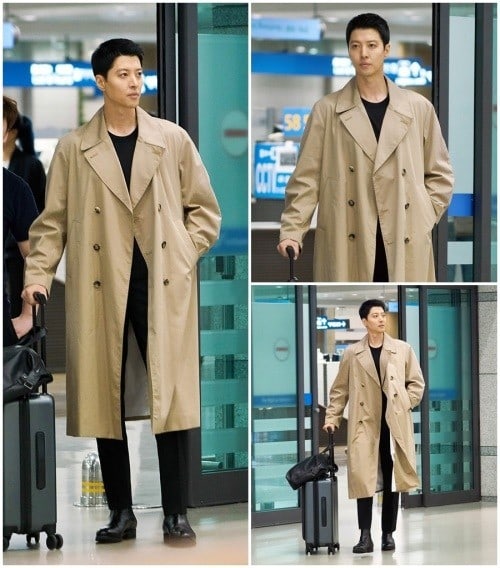 Above all, Seo In Woo’s comeback will bring large-scale changes to Incheon International Airport. It remains to be seen why Seo In Woo returns to Korea, who he meets immediately upon his arrival, and what the mysterious developments surrounding him are.

The scene in the photos was Lee Dong Gun’s first shoot for the drama. He expressed Seo In Woo’s powerful charisma with an expression and attitude that never relaxed, following the “airport fashion” that heavily embraced the fall atmosphere. His detailed acting where he shares knowing glances with an immigration officer, along with his performance where he brushes shoulders with someone after he leaves the departure gate perfectly embodied the character of Seo In Woo himself.

The production staff stated, “The impact of ‘Women’s Hearts Sniper’ Lee Dong Gun’s ‘explosive visual’ first appearance was so great that all of the staff members stirred in excitement. Please look forward to the confident performance of Lee Dong Gun, who will add onto the character of Seo In Woo in a different way from his previous projects.”

The drama will premiere on October 1 at 10 p.m. KST, and will be available on Viki! In the meantime, check out the teaser with English subtitles below: