On the September 30 episode of SBS’s “My Ugly Duckling,” actor Lee Dong Gun appeared as a special MC.

During the show, the panel of mothers told him, “I wish my son was as lucky as you” when he talked about his wife, Jo Yoon Hee, and young daughter. 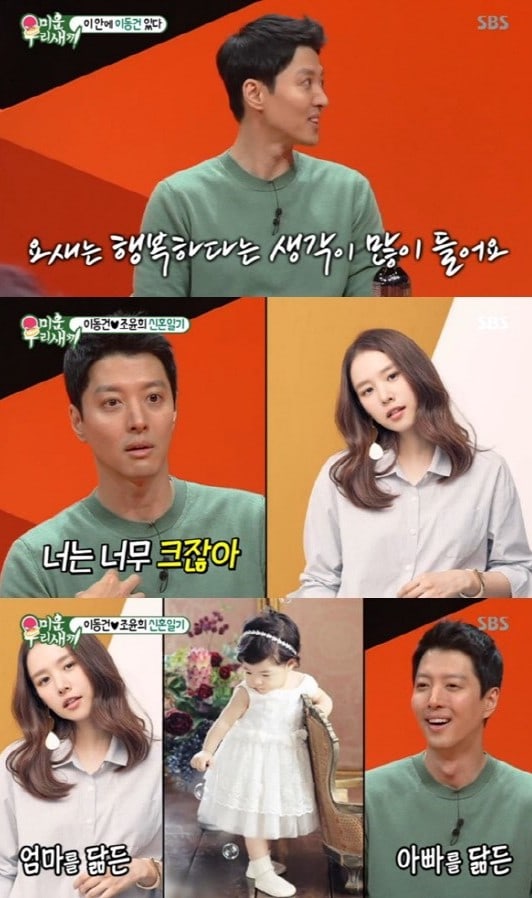 Lee Dong Gun met Jo Yoon Hee on the set of a drama (“Laurel Tree Tailors”). On the show, the actor said, “The drama was 50 episodes and my character dated Jo Yoon Hee’s character, married her, and had a child with her. When the drama was about to end, I wondered, ‘Is it okay to just end things like this?’ I wasn’t thinking of marriage at that point in my life, but I realized that if I let this woman go, I might never get married.”

About his proposal, he said, “I wasn’t able to do it officially. We began dating with marriage in mind. We thought it would be nice to have a child quickly so we registered our marriage first. The marriage registration became our proposals.”

He expressed his happiness with his marriage, saying, “It’s been about a year and I’m always thinking about how happy I am. I don’t wish for anything else.”

Also during the show, he talked about the idea that love has an “expiration date.” He said, “I think the sparks of love are always changing. After getting married and living with someone every day, there will be times when the sparks get dimmer. There are times when they burn brighter, too.”

He continued, “You can think to yourself during those times that love has died, but I think that if you blow on the sparks, the fire will come back. Being a married couple means working to blow on those sparks when they’re low. If you put in effort, there’s no reason that love should have an ‘expiration date.'”

Watch “My Ugly Duckling” below: