“Where Stars Land” tells the story of Lee Soo Yeon (played by Lee Je Hoon), an elite passenger services employee and mysterious man with a secret, and his storybook romance with a first-year employee named Han Yeo Reum (played by Chae Soo Bin) who frequently gets herself into trouble.

In the last episode, Lee Soo Yeon saved Han Yeo Reum from an angry passenger who grabbed her by the collar and also right before another passenger tried to hit her with a piece of security equipment. The two bickered as they went about their day together and Lee Soo Yeon surprised viewers by revealing his amazing strength.

In the latest set of stills, Lee Soo Yeon looks surprised in the office kitchen after getting attacked by a cup of ramen and a slap on the face by Han Yeo Reum. He also looks down at his arm covered in hot water before touching his cheek. After looking at one another, she holds his hand.

Lee Je Hoon impressed with his facial expressions and sudden laughter while filming this scene of the double attack from her character, and Chae Soo Bin blinked at his reaction to getting ramen spilled on him. She then completed the scene by slapped his face at the perfect time. When Lee Je Hoon reacted realistically by grabbing his cheek, Chae Soo Bin along with everyone else on set burst into laughter. 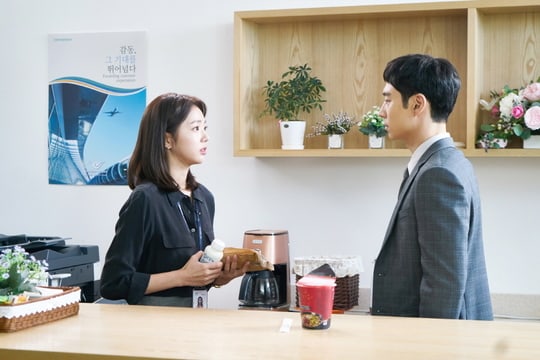 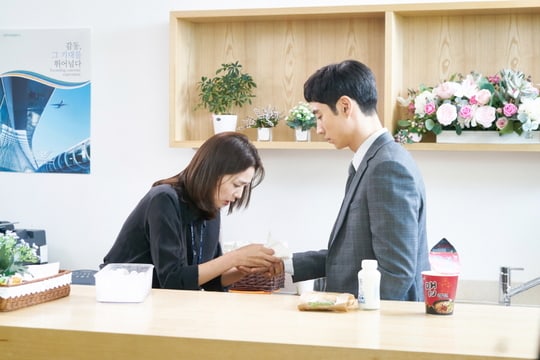 A source from the drama said, “Through this scene, Lee Je Hoon and Chae Soo Bin’s ‘new employee couple’ romance will officially begin. Please look forward to the two people’s chemistry in the small, quiet office kitchen and what kind of butterfly effect this will have.”

“Where Stars Land” airs on Mondays and Tuesdays at 10 p.m. KST. Check out the show below!