The cast of “Where Stars Land” talked about the role that Lee Je Hoon plays off camera!

On the October 2 episode of SBS’s “Night of Real Entertainment,” Lee Je Hoon, Chae Soo Bin, Lee Dong Gun, and Kim Ji Soo of “Where Stars Land” sat down for an interview.

The drama takes place at Incheon International Airport, and since it films on location, fans have spotted the actors performing scenes at the airport. Many people have uploaded videos of Lee Je Hoon smiling and waving at their cameras between takes. The actor explained in the interview that he does this because he doesn’t often have the chance to see his fans.

When asked who the “mood maker” is on set, Lee Je Hoon’s co-stars all picked him immediately. 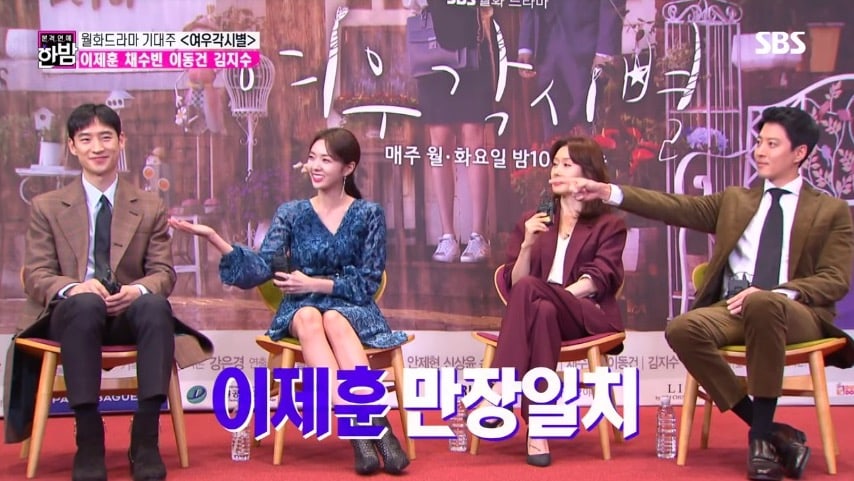 Chae Soon Bin said that Lee Je Hoon is also her hair stylist, and Kim Ji Soo explained, “He fixes the bangs of his female co-stars.”

Lee Je Hoon was also asked to explain the truth behind his character, but he said he couldn’t tell even though he wanted to. “There’s a secret involved,” he said. “Please find out by watching the show.”

“Where Stars Land” airs on Mondays and Tuesdays on SBS. Check out the latest episode below!

Lee Je Hoon
E-news Exclusive
Where Stars Land
How does this article make you feel?