Han Ji Min On Dealing With Expectations That Actresses Always Look Beautiful, No Matter Their Role

Han Ji Min shared her thoughts about common expectations that actresses always look beautiful, regardless of their character.

She stars in the new film “Miss Baek” as the protagonist Baek Sang Ah, who became a convict after trying to protect herself. It follows her fight to protect a child who is similar to her (played by Kim Si Ah) from the cruel world.

After reading the script, Han Ji Min’s concerns weren’t about if she could pull off this character. She explained, “After seeing the script, I asked if I got the script because I received an offer for this role or if the agency found a good script and gave it to me. It was different from the offers I had gotten in the past. I thought it was strange and asked, ‘Did this really come for me?'”

She continued, “I woke up in the middle of the night and read the script for ‘Miss Baek.’ I think I felt it emotionally because of the time, but it felt like something that could be happening right now. I first felt sorry for Sang Ah and Ji Eun because of the situations they endured at a young age. I wanted to embrace them as an adult. Instead of questioning whether or not I could portray this, I first thought, ‘I really want to see this film.'”

Han Ji Min’s appearance as Baek Sang Ah is surprising from the get-go. She squats as she smokes a cigarette, grits her teeth while mopping the floor of a car wash, and drinks soju during the day at a restaurant. She also takes a child who’s been kicked out of her home to a cart bar instead of a police station and smokes next to her.

Some may see this and describe Han Ji Min as looking “ugly,” but she stated, “Being ugly and acting are different.”

She explained, “Even when I was on ‘Familiar Wife,’ I heard a lot of people say, ‘Is it okay for you to appear that ugly?’ No matter what the medium, female characters always appear beautiful. Because of the way dramas and films are, there aren’t many opportunities for female characters to show something. It’s not easy for a female character to be rough around the edges in a drama. It’s important to relate to female viewers, but it’s also important to give viewers vicarious satisfaction. So when a character doesn’t have the positive qualities of a traditional female character, the word ‘ugliness’ is frequently used.”

Appearance is another way of expressing the character’s personality, so it’s something that requires a lot of thought. Han Ji Min stated, “It was like that for Baek Sang Ah and during ‘Familiar Wife.’ I thought a lot about how to best showcase my character’s situation and emotions. But they’d say I ‘left beauty behind’ if I didn’t wear makeup, or they’d use the phrase ‘despite looking ugly’ if I shouted.”

She continued, “It might be because there are many occasions for me to look fancy at official events as an actress. But thinking ‘How will I look?’ while acting is the most distracting thing. Viewers also have high standards, so they notice immediately when an actor looks different from their character. The emotions are also conveyed right away.” 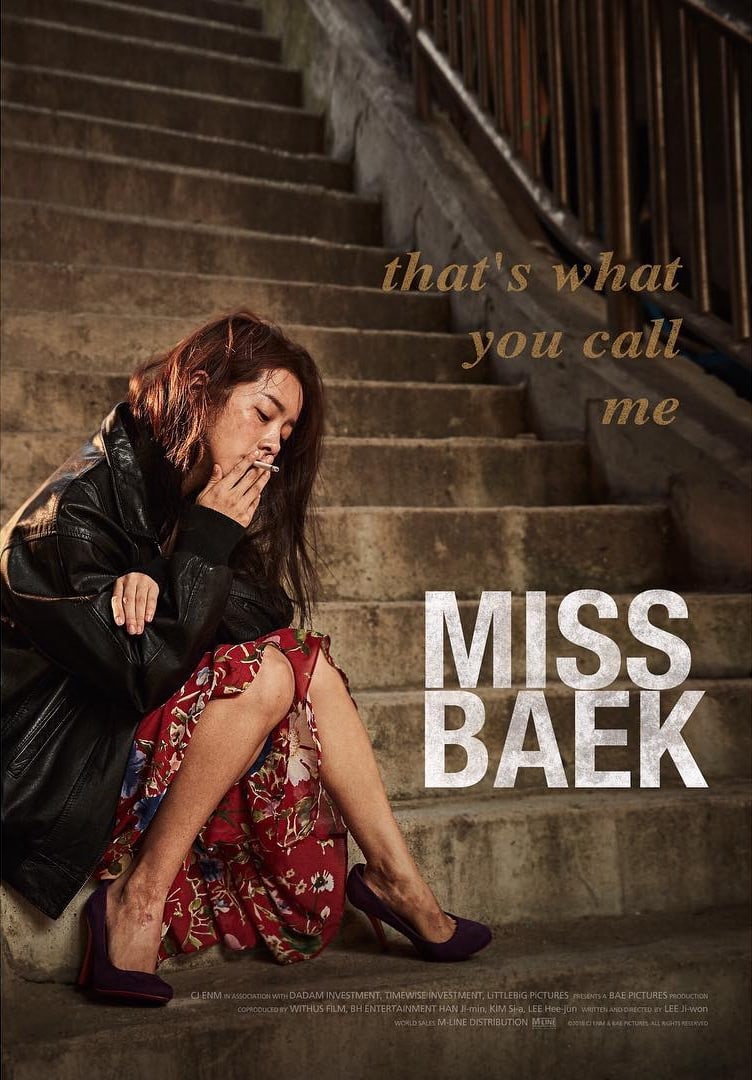 One of the questions that Han Ji Min received the most after the reveal of “Miss Baek” was about smoking. In the film, Baek Sang Ah is a heavy smoker, so Han Ji Min smokes throughout the film.

Han Ji Min said she expected this question and added with a laugh, “I prepared a form answer. Do you want to hear it? I expected the issue of smoking or ‘ugliness’ from the start of the film.”

She said, “I understand that viewers will be curious about an actress smoking and I’m sure they’re curious about whether or not I’m a smoker in real life. But this kind of information doesn’t help before watching ‘Miss Baek.’ I just tried my best with each action and gesture as Baek Sang Ah. I want to hope that the viewers who watch the film will evaluate me just based on the film.”

She concluded, “I do worry that the image I showed on ‘Miss Baek’ might harm the past image I showed the public as Han Ji Min, but I approached it as showing a new appearance as an actress and not as breaking away from my existing image. I’ve never had a rough image, so I thought that it might show my acting skills even better. I worked hard so that the public could watch ‘Miss Baek’ and think, ‘Wow. Han Ji Min worked hard.'”