The new tvN drama “Encounter” (formerly known as “Boyfriend”) will tell the love story of Cha Soo Hyun (played by Song Hye Kyo), the unhappy daughter of a prominent politician and ex-wife of the heir to a wealthy conglomerate, and Kim Jin Hyuk (played by Park Bo Gum), an ordinary, innocent young man that she happens to meet. Unlike Cha Soo Hyun, who has never been truly able to lead a life of her own, the free-spirited Kim Jin Hyuk knows how to find happiness in the small things.

The newly released photos show the drama’s cast attending their first script reading, which took place in the Sangam neighborhood of Seoul in August. According to those present, Song Hye Kyo used a calm, composed tone of voice to portray the poised and well-heeled Cha Soo Hyun, and she imbued each and every line of her dialogue with natural, realistic emotion.

Park Bo Gum, who introduced his character at the table read as “Kim Jin Hyuk, a young man who is [youthful and refreshing] like a green-grape,” also made a splash with his natural charm and passionate acting. He also impressed everyone with his level of preparation, which showed through in his performance.

The cast and crew were also reportedly blown away by Song Hye Kyo and Park Bo Gum’s instant chemistry, which made it easy for those present to become swept up in their characters’ romance.

Director Park Shin Woo remarked, “Looking at [the cast], for whom I’m grateful, it makes me think that I really need to do a good job. I will work hard so that, once [‘Encounter’] is over, it’ll be a drama that we can be even more proud of.”

Writer Yoo Young Ah similarly commented, “I want to say that I’m truly thankful. I will work hard on writing the rest of the script and the characters that you have chosen.” 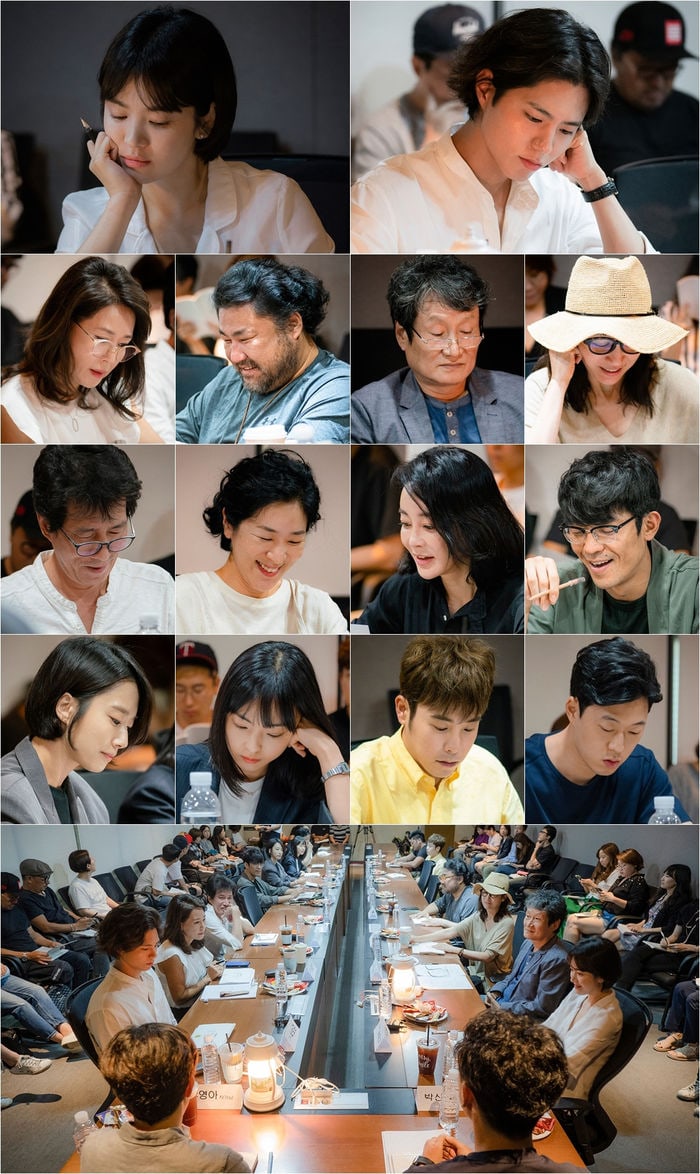 The producers of “Encounter” remarked, “It seems as though we have gathered a cast that can never be seen again for this drama. It was a delightful script reading that showcased the ideal teamwork and acting skills of all the actors, including Song Hye Kyo and Park Bo Gum.”

They went on, “The entire cast and crew will join forces to greet you this November with a love story that will make your heart ache. Please look forward to it.”

“Encounter” is currently scheduled to air in November, following the conclusion of tvN’s mystery melodrama “The Smile Has Left Your Eyes.”