The upcoming KBS2 drama explores the question if marriage is the true completion of love. It is a romantic comedy about the fun differences between men and women’s thoughts on love, marriage, and family.

Jo Seok Moo (played by Cha Tae Hyun) and Kang Hwi Roo (played by Bae Doona) are the main characters of this new show. The two have opposite personalities, as the former is a cranky, sensitive man, while the latter is a clumsy woman who is constantly seen laughing. The two actors will portray a realistic marriage and also arouse feelings of empathy from the viewers.

“Matrimonial Chaos” recently released still images of Cha Tae Hyun and Bae Doona during the happy stages of their marriage. The title of the drama itself, “The Greatest Divorce” (literal translation), already foreshadows what will happen to their relationship, but the images show a different case.

In the photos, Cha Tae Hyun and Bae Doona enjoy their newly-married life. They hold each other while laying on the floor and burst into laughter, spending every day in a fun way. They showcase the familiarity and sweet image that only a newly-married couple can have. 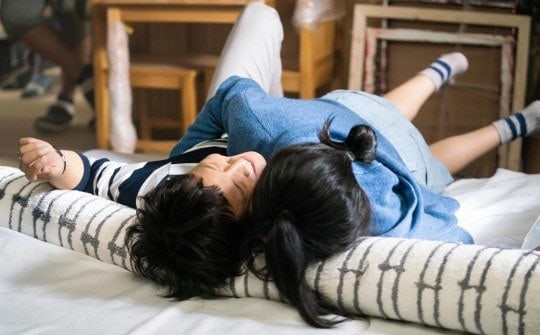 With these new images, many are already wondering what happened for the couple to end in divorce. Cha Tae Hyun and Bae Doona will portray a divorced couple who will only begin to really look at each other after they have already become strangers.

The drama will premiere on October 8 at 10 p.m. KST and will be available on Viki! Check out the trailer with English subtitles below: