Stan LOONA: 12 Things You Need To Know About These Rising Rookies

Unless you were living under a rock for the past couple of years, you must have come across girl group LOONA at least once. The birth of the 12-member group, signed under Blockberry Creative, has been meticulously revealed to the general public over the span of 18 months starting on October 2, 2016. Needless to say, their strategy was completely successful as they intriguingly captivated the audience and left them anticipating their long-awaited debut as a full group on August 7, 2018.

If you’re curious about how LOONA came to be, here are 12 things you need to know about this incredibly skyrocketing group!

1. The meaning behind the group name

Behind every group name lies a fascinating concept. When it comes to LOONA, celestial embodiment is the main lore. In fact, the group’s Korean name 이달의 소녀 literally translates to “Girl of the Month,” hinting at the lunar calendar formula. Furthermore, the Korean characters ㅇ, ㄷ, ㅇ, ㅅ, and ㄴ from their Korean name are used to form their English name LOONA, stylized as LOOΠΔ to highlight the similarities between the Latin and Korean alphabets. It goes without saying that a lot of thought has been put into the creation of LOONA, and the result is truly mindblowing!

Staying true to their name, a new member was introduced each month via a solo release! During their appearance on “After School Club,” the group stated that they don’t have fixed positions. Therefore, the positions stated below are not official and are solely based on each member’s forte on their different releases.

(From left to right and in order of their individual appearances).

Heejin: she is in charge of vocals, dance, and rap. She was the first member to be introduced with her solo “ViViD” on October 4, 2016.

Hyunjin: she is in charge of vocals and dance. Her song “Around You” was released on November 16, 2016.

ViVi: she’s one of the vocalists and the oldest member of the group. On April 16, 2017, she revealed her song “Everyday I Love You.”

Choerry: she’s in charge of rap and vocals. Her song “Love Cherry Motion” was released on July 27, 2017.

Chuu: she’s one of the vocalists of the group. Her song “Heart Attack” was released on December 27, 2017.

Olivia Hye: she’s in charge of vocals, dance, and rap. She was the last member to be introduced with her song “Egoist” on March 29, 2018.

To learn more about each member’s background story, make sure to read the description of every MV!

LOONA’s first sub-unit was created on March 12, 2017 with the release of their first mini-album “Love & Live.” LOONA 1/3 originally consisted of members HeeJin, HyunJin, HaSeul, and ViVi. Later, it was revealed that YeoJin is the latest addition to the sub-unit despite not having taken part in any of the releases so far.

After the introduction of Kim Lip, JinSoul, and Choerry, LOONA’s second sub-unit saw the light of day on September 21, 2017 with the release of their first mini-album “Mix & Match.”

The final sub-unit consisted of the remaining members Yves, Chuu, Go Won, and Olivia Hye. The girls released their first mini-album “Beauty & The Beat” on May 30, 2018.

If you think you have figured out LOONA’s concept by now, think again. Each sub-unit has a specific role in the storytelling of the group’s tale. Together, LOONA 1/3 (the Earth), LOONA Odd Eye Circle (Middle Earth), and LOONA yyxy (Eden) create the girls’ alternate universe “LOONAVERSE,” which was gradually introduced through the members’ solo and sub-unit releases. The picture was finally completed through their debut extended play “++,” which signifies the effect that these three sub-groups create when gathered together.

To learn more about the meaning of each sub-unit, read the description of the MV below!

No group is ever complete without a dedicated fandom. That being said, LOONA gave their fans the perfect fanclub name in order for them to smoothly complete the storyline. Labeled “Orbit,” the name fits just right as it beautifully illustrates the relationship between LOONA and their fans.

With all the hype surrounding the group, fans who have been with them since the start made sure to spread the word about them amongst the K-pop community. This led to the birth of the “Stan LOONA” movement which started as a promotional catchphrase to introduce the group, only for it to reach non-K-pop fans as well. The fan project went viral, becoming both a meme and yet another proud representation of K-pop. Plus, even media outlets who don’t usually cover K-pop news were intrigued enough to write a full article about LOONA.

After what seemed like forever, LOONA finally recorded an OT12 song. Although “Hi High” is their official title track from the “++” EP, another song titled “favOriTe” was first revealed as a single prior to the mini-album’s release, thus disclosing the members’ synergy and signature as a full group for the first time.

Holding a concert is every K-pop group’s dream and main goal since the beginning of their musical career. For LOONA, the dream came true effective immediately, as their debut concert sold out in two minutes. What makes it even more mindblowing is that the concert itself took place prior to the girls’ official debut!

Check out their concert’s exciting teaser!

When it comes to music, charts are always a critical step in an artist’s career. Luckily for LOONA, their music charted amazingly on iTunes and Billboard charts, thus leaving their print internationally.

They also made their full group debut on the Billboard World Albums chart at No. 4 with the same mini-album. Furthermore, LOONA scored their second entry on the World Digital Song Sales chart with “Hi High” at No. 11 after they landed their first entry with “favOriTe” at No. 4. 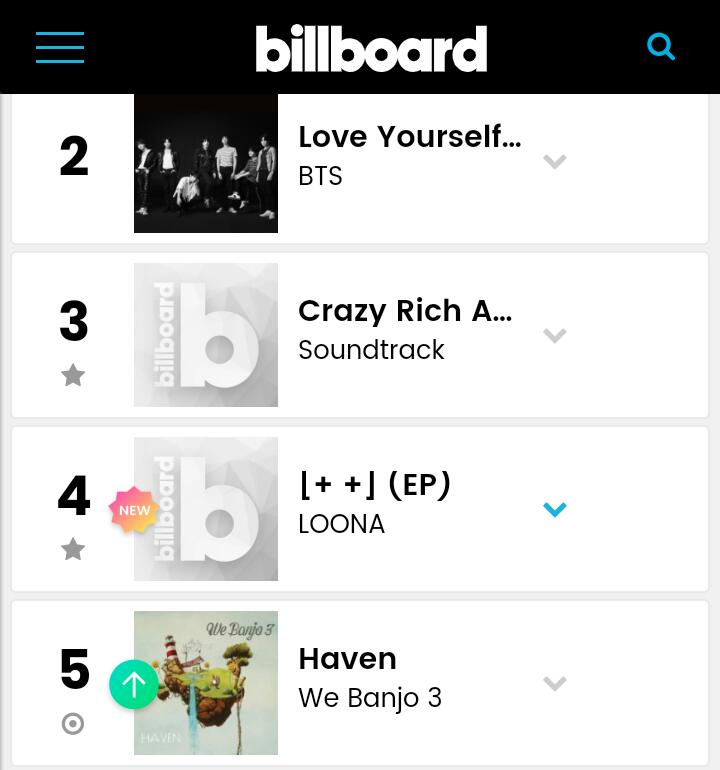 Just like any rookie group, LOONA is filled with hopes and dreams. The girls aspire to show the best versions of themselves as a full group and eventually earn the title of “Monster Rookies,” as they’re hoping to win a rookie award. They also shared their promise for their first win on a music show, as they hope to hold a guerilla concert at a location chosen by their fans.

What are you waiting for? Stan LOONA!

What do you think of LOONA so far? Are you a fan yet? Let us know in the comments below!