IU Reigns Over All Major Realtime Charts With “BBIBBI”

IU has successfully released yet another hit song!

On October 10 at 6 p.m. KST, IU dropped her newest digital single “BBIBBI” in honor of her 10th anniversary since debut this year. She personally penned the lyrics for the track, which also marks her first attempt at alternative R&B.

It debuted at the top of many major realtime charts right after its release and by 8:30 p.m. KST, the song was No.1 on all six — Melon, Genie, Bugs, Mnet, Naver, and Soribada. 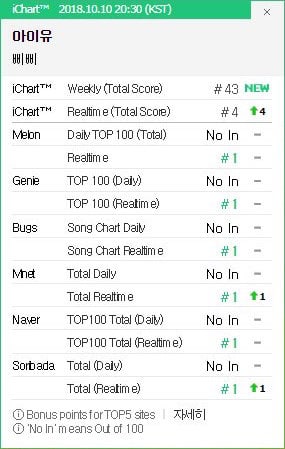