Huddle Up For Halloween With These 8 Chilling Korean Horrors

It’s the most wonderful time of the year, October! When everything is spooky and fills you with chills! Recent years have definitely seen a rise in Korean horror cinema with some of the films on this list, but Korea has been churning out thrills for decades. Below are just some of the fantastic frightening movies you should totally add to your Halloween Horror Movie list.

Warning: Heebie-jeebies alert! The writer of this article will not be responsible if you have trouble falling asleep at night. 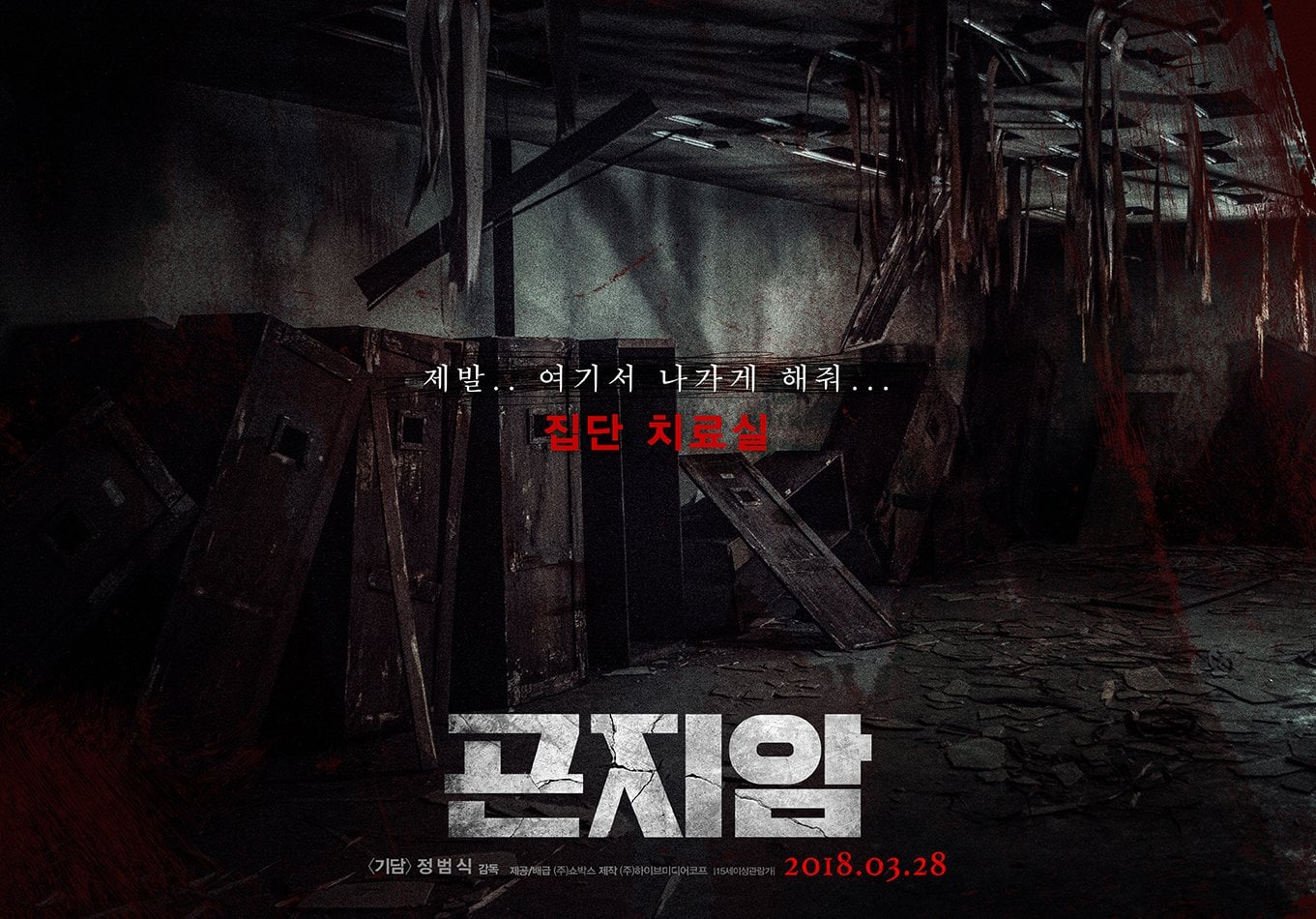 For the first hour of “Gonjiam,” you might feel as though you’ve already seen it. A group of young people plan a visit to a haunted asylum in the woods where they will hold a live stream in hopes of gaining advertising revenue for future episodes of their horror documentary. The asylum, Gonjiam, located in rural South Korea, is shrouded in mystery and legend, and we’re introduced to a vague story of suicidal patients and a potentially murderous doctor. The movie is entirely shown from the point of view of the six characters, three men and three women, as they travel through the building wearing body and head cameras. If you’ve seen “The Blair Witch Project,” “Grave Encounters,” “As Above So Below,” or any of the hundreds of found footage movies that came out after “Blair Witch,” then you know the format and you won’t be very surprised or tense for at least the first hour. 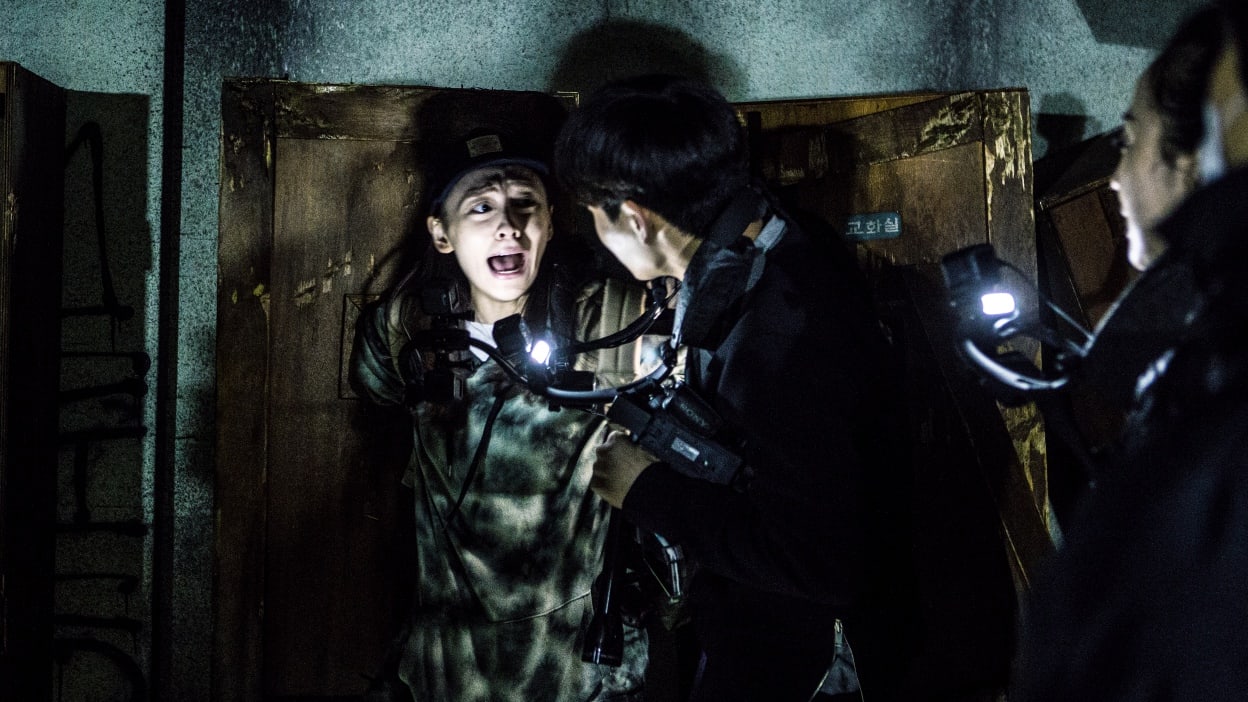 It isn’t until the the climax of the movie that the survivors of the group finally open a door that legend says has never been opened in all the years since the asylum shut down. This is the apex of their trip, the thing their viewers are waiting for, and a catalyst for some truly unnerving imagery. Watching the characters on their selfie cams as they watch each other, true terror in their eyes, theirs mouths ajar with disbelief and an intense desire to scream or wail, will leave you shaken even after the credits roll. 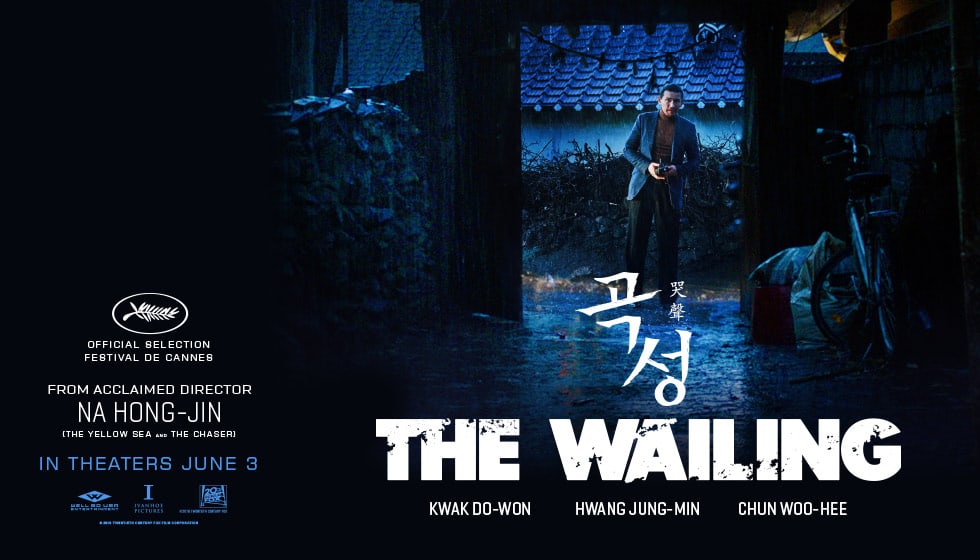 How many people sat through Psycho (1960) years after it’s original release and yawned at the campy death scenes and typical, now-so-over-done, horror cliches and tropes, but felt a chill travel through their body in the final scenes, as Norman Bates is revealed in his true form. It’s that reveal of true evil, honest and bare, in the wake of mystery and intrigue, that sets your hairs on end and gives you goosebumps. The same feeling can creep into your veins and leave you cold in the final scenes of “The Wailing.” Following a bumbling cop in a small claustrophobic town in rural South Korea, this movie shows the real terror of small town xenophobia and fear of outsiders, as a frightening disease sweeps through a small community, leaving behind only bloodied and twisted corpses.

Movies With My Dad

It is as much a mystery (and a good one) as a horror with superb performances that leave you wanting nothing, simply regaining your composure as you process what you just watched. 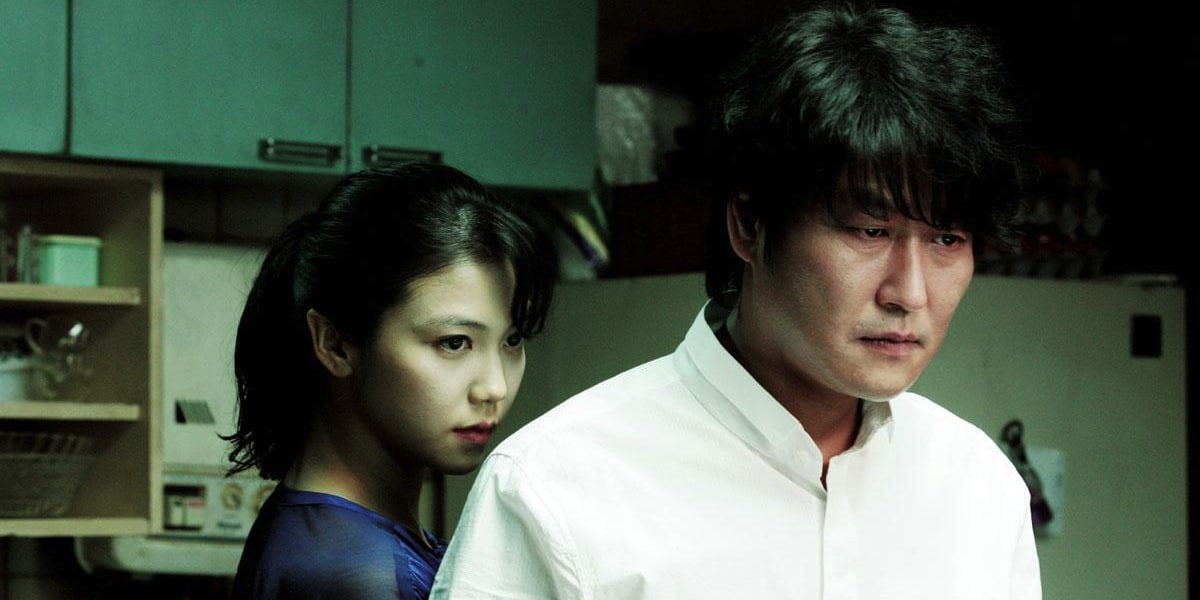 Korean movie director Park Chan Wook is famous for uncanny imagery, alternative, almost taboo relationships, and visually stunning cinematography, and “Thirst” is no different, except it is unlike his other work in that it is smaller, quieter, and uncomfortably closer. 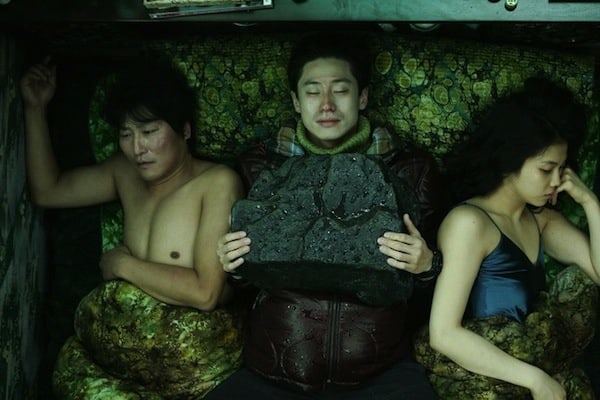 So close the two leads are practically wrapped around one another for the entirety of the movie, as is also represented in the movie poster. The sexy, dark, and twisted story follows a priest (played by Song Kang Ho) as he volunteers to take part in a medical trial and is infected with a fatal virus only to be resurrected with a strange blood that carries it’s own disease. Returning home, he is hailed as a holy man with healing abilities and sought out by old acquaintances for help. A childhood friend invites the mysterious priest into his home and his family where an almost animal attraction draws him towards his friend’s wife Tae Ju (played by the stunning Kim Ok Bin). The events that follow are chilling, visceral, and personal, showing a love and lust between two people that spirals out of control when Tae Ju becomes addicted to the new freedom she has found.

A genre-bender boasting ghosts, vampires, and horrible people combined with fascinating visual effects, this one’s worth it even if you can’t stand the sight of blood… squint. 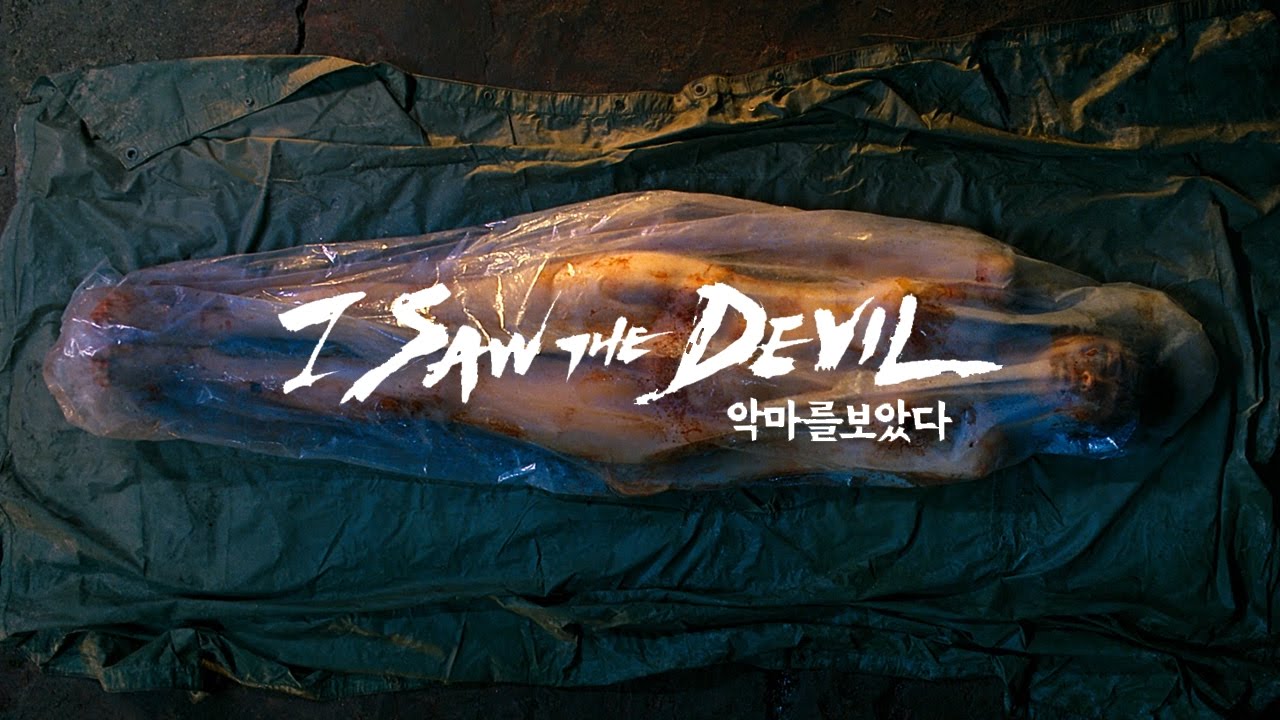 Look to director Kim Ji Woon for an adrenaline rush and in-your-face action, drama, and style. With movies “The Good The Bad and the Weird,” “A Bittersweet Life,” and another movie on this list, “A Tale of Two Sisters,” he continues to deliver your every desire in twists and turns, heart wrenching performances, and pure shock. The movie follows a grieving cop (played by Lee Byung Hun) on a mad quest to catch the serial killer that brutally murdered his wife and bring him to justice… and then release him and do it all over again. It’s the story of a good man struggling with what justice is, what act could possibly make sense of or make right an evil act that makes no sense. Most importantly, it’s one of the most shocking, bloody, and unapologetically violent movies I’ve ever seen. To say too much would be a disservice, as it is the shock factor that wrenches you forward from your seat and leaves you laughing or gasping in awe. One particular scene, seemingly unconnected to the rest of the plot, a short segue, you might say, is so cinematically creative and insane, it simply can not be missed (hint, it’s in a taxi). 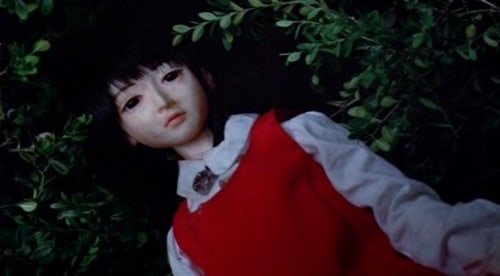 Do you like dolls? I’ll bet not nearly as much as the characters in this movie and probably even less after you’ve seen it! The story follows Hae Mi (played by Kim Yoo Mi), a sculptor who joins four strangers when they’re invited to a big scary house in the woods to pose as models for a Ball Joint Doll maker. No alarm bells ring as they drive down a heavily forested dirt road in the middle of nowhere and are welcomed by two creepy hosts and their large creepy doll collection. It’s so obvious they’re all going to die you can’t help but wonder how the characters don’t know it themselves, but there is a pleasant aesthetic to the movie, whimsical soundtrack, rather beautiful dolls, and a quiet, eerie presence to the house that makes this one worth a watch. Is it terrifying? Well, that depends on your tolerance for horror and gore; the death scenes are interesting and somewhat unique, whilst playing up to some classic tropes of Korean cinema and horror, and the dolls are… well, I’m not sure which is more scary, the dolls or the people talking to them. 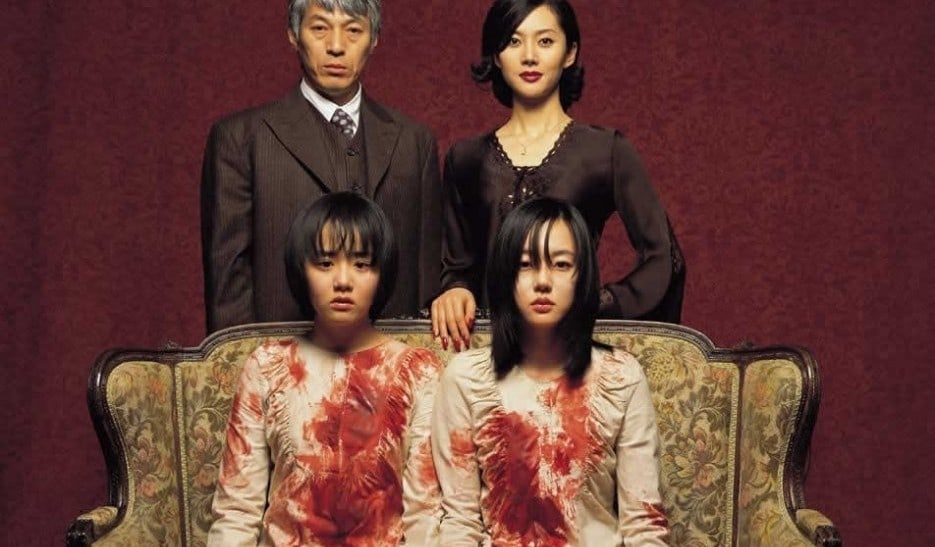 Written and directed by Kim Jee Woon, this tense, eerie, and unnerving movie is a staple of Korean horror that earned an American remake and is still just as good as it was on initial release. Don’t read about “A Tale of Two Sisters” if you haven’t seen it, and watch out for the comments below to really immerse yourself in the story and enjoy all the twists and turns.

The film starts when Su Yeon (played by Moon Geun Young) and Soo Mi (played by Im Soo Jung) return from an extended stay in a mental health facility after the tragic death of their mother. Beautifully filmed, expertly performed, filled with psychological thrills and mind bending imagery, this truly is one not to miss and can easily be enjoyed several times over. 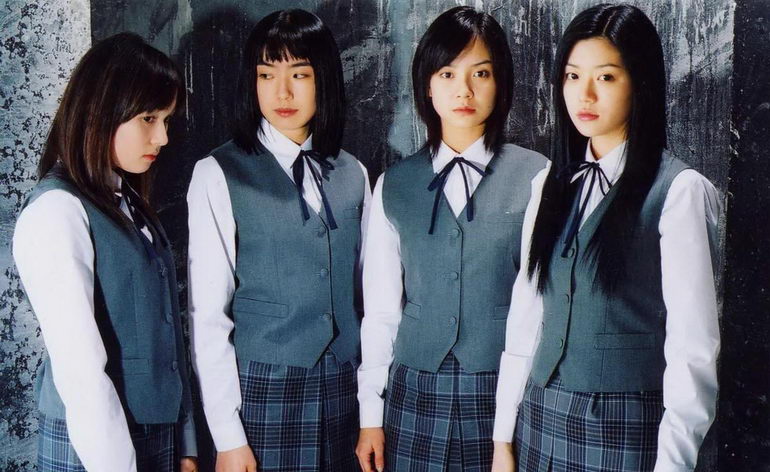 The “Whispering Corridors” series is an anthology of sorts, with each new installment introducing a new premise and brand new characters but all returning to a high school setting. “The Wishing Stairs” is the third installment, taking place in an all girls high school with a frightening urban legend. It is believed by the students of the school that if one were to climb to the top of an exterior staircase on the grounds, counting each step as you go, another, magic step will appear at the top. Those blessed with the appearance of the 29th step will be granted a wish, but as we all know, wishes only come at a price, and this movie is a great example of the common phrase “be careful what you wish for.”

Best friends Jin Sung (played by Park Han Byul) and So Hee (played by Song Ji Hyo) are inseparable until a ballet competition stirs up some jealousy between them. Jin Sung is clearly the better of the two and is set to win a scholarship to attend a Russian ballet school, pushing So Hee to try the wishing stairs herself after hearing from a formerly overweight classmate that the stairs helped her to lose weight. She slowly climbs to the top and the 29th stair appears! And, of course she knows what she wants, she just doesn’t know what it will cost her.

“The Wishing Stairs” is filled with common tropes from Asian horror and isn’t particularly original, but it is a great watch on a late night in Fall, listening to the wind whirling outside and hugging your comforter close. The performances are also impressive, building a believable love between the girls that makes the horror and tragedy all the more gripping. 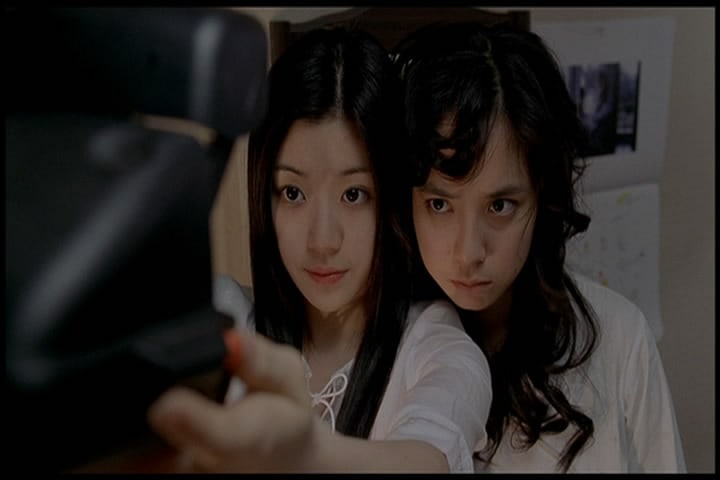 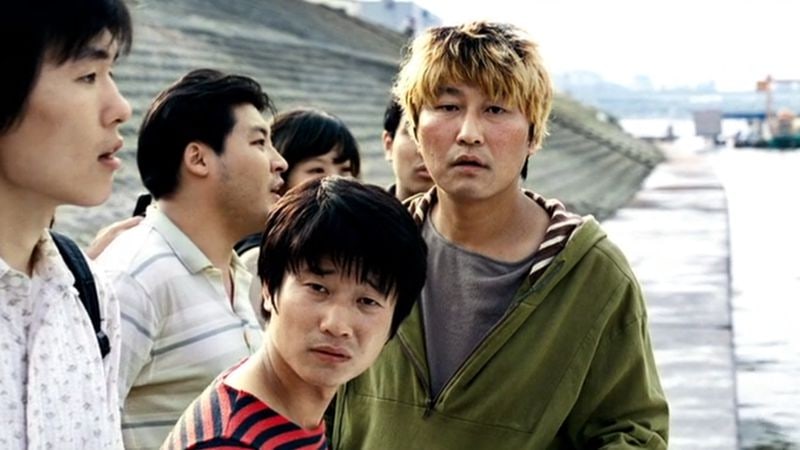 More of a monster movie in style and theme, “The Host” still packs a punch as an uncanny, disturbing watch, especially if you’ve ever visited South Korea’s Han River where the story unfolds. South Korea’s answer to Godzilla, the story begins when a U.S. military official knowingly contaminates the Han River with formaldehyde, giving birth to a huge, slobbering, reptilian monster that crawls out of the depths to feast on unsuspecting Koreans and their children. Mere minutes into the movie, the monster lays waste to dozens of people before snatching up a young girl and returning to the water.

The young girl (played by Ko Ah Sung) is daughter to a layabout moron (played by Song Kang Ho) who spends the rest of the movie tripping over his own feet in his attempts to save her. It is a trend seen in many a Korean movie, when the people are failed by government, authority, and big business, and are forced to take matters into their own hands.

The genre switches between horror, slapstick comedy, intense thriller, and adventure, showing the strength ordinary people can show when officials fall short and they’re forced to save their own with what little resources they have. The CGI may have aged badly, but the the message is just as topical today as ever, and the performances are riveting.

What did we miss? Leave your recommendations below!

MizWest is an English Teacher working in South Korea, finally climbed a mountain! But still can’t use chopsticks…

Currently watching: “Matrimonial Chaos” and “Lovely Horribly”
Looking forward to: “Mama Fairy and the Woodcutter” and “The Beauty Inside”
All-time favorites: “Healer,” “Reply 1997,” and “Master’s Sun“