On October 11, the drama caught viewers off guard by releasing photos of Kim Hee Sun and Oh Dae Hwan looking surprisingly close. In the drama, Oh Bong Sam (played by Oh Dae Hwan) considers lawyer Eulji Hae Yi (played by Kim Hee Sun) to be his arch nemesis—after the ruthless attorney gets the detective demoted to traffic cop, he becomes fiercely determined to find an opportunity to get back at her.

However, after prisoner Jang Hwa Sa (initially played by Kim Hae Sook) switches bodies with Eulji Hae Yi, Oh Bong Sam notices that there seems to be something different about her. In the newly released stills, Oh Bong Sam affectionately fastens a police helmet on “Eulji Hae Yi” (who is actually Jang Hwa Sa)’s head and even allows her to ride on the back of his motorcycle.

The producers of “Room No. 9” commented, “Kim Hee Sun and Oh Dae Hwan’s relationship will become a key point of the drama that [viewers] should keep their eye on. The chemistry between the two will be a new source of entertainment.” 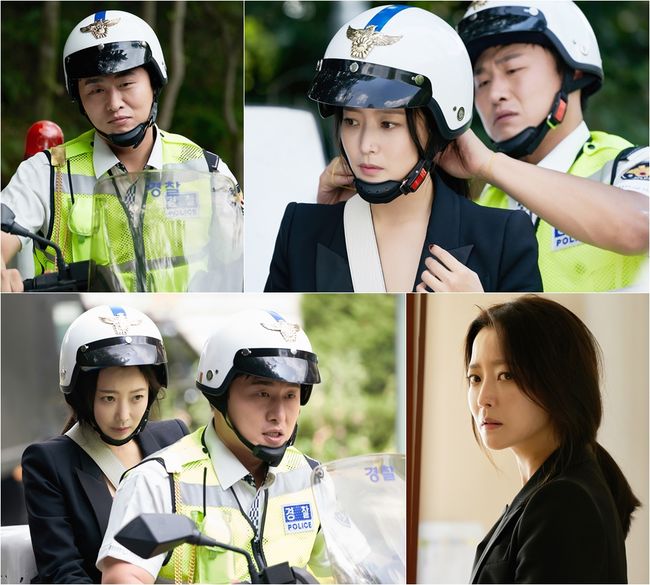 They added, “On this week’s broadcast of ‘Room No. 9,’ Jang Hwa Sa will borrow Eulji Hae Yi’s body and chase after the truth behind the incident that made her a death-row convict. Meanwhile, Eulji Hae Yi will fiercely attempt to regain her body. Please look forward to the suspenseful survival game that Eulji Hae Yi and Jang Hwa Sa will risk their lives to play.”

Kim Hee Sun
Oh Dae Hwan
Room No.9
How does this article make you feel?