“In-Laws In Practice” Couples Get Closer During Their Dates

The fantasy couples on tvN’s “In-Laws in Practice” got to know each other more on the latest episode.

“In-Laws in Practice” is a variety show where celebrity fantasy couples live out their “newlywed” lives while their parents watch and comment from the studio.

On October 12, viewers and celebrity parents watched as the Nam Tae Hyun-Jang Do Yeon couple spent their first night together and the 9MUSES’s Kyungri-Austin Kang couple went grocery shopping on a scooter.

During the episode, Nam Tae Hyun told Jang Do Yeon, “I like to dress other people” and she replied that he should pick out clothes for her. He picked an outfit for her and they walked out in matching white T-shirt and jeans.

The singer showed signs of being tired while walking a difficult path and the other celebrities moms at the studio suggested that Jang Do Yeon’s mom should get deer antler extract juice for him to help his strength. Promising to give this to Nam Tae Hyun, she stated, “Okay.”

Nam Tae Hyun and Jang Do Yeon talked for a while in the car ride on the way to find out their marital compatibility. He asked her, “Should we speak comfortably?” and she replied, “Okay. Speak comfortably.”

Once they arrived, Nam Tae Hyun said, “You usually find out the marital compatibility before getting married, but we were in a rush and got married first,” making Jang Do Yeon blush.

She blushed once again when the consultant commented that Jang Do Yeon is older after hearing their birth years. She continued, “I think there’s a reason why the two of you got married quickly. Your marital compatibility is really good.” She compared Nam Tae Hyun to the sun and Jang Do Yeon to a high mountain, and added that their physiognomies were also similar.

She then said that Jang Do Yeon had good luck in finding her husband while Nam Tae Hyun matches well to his wife’s mood. They were also informed that their fate, physiognomy, and chemistry in bed would also be great.

The couple then headed to a bar that Nam Tae Hyun frequents and drank whiskey. They got closer while drinking, watching the bar owner’s magic tricks, and talking.

They headed to Nam Tae Hyun’s house where they spent their first night together. Putting the blanket over them that was gifted to them by Jang Do Yeon’s mom, they laid together in Nam Tae Hyun’s bed. Jang Do Yeon had a hard time hiding her awkwardness and he looked at her with cuteness. 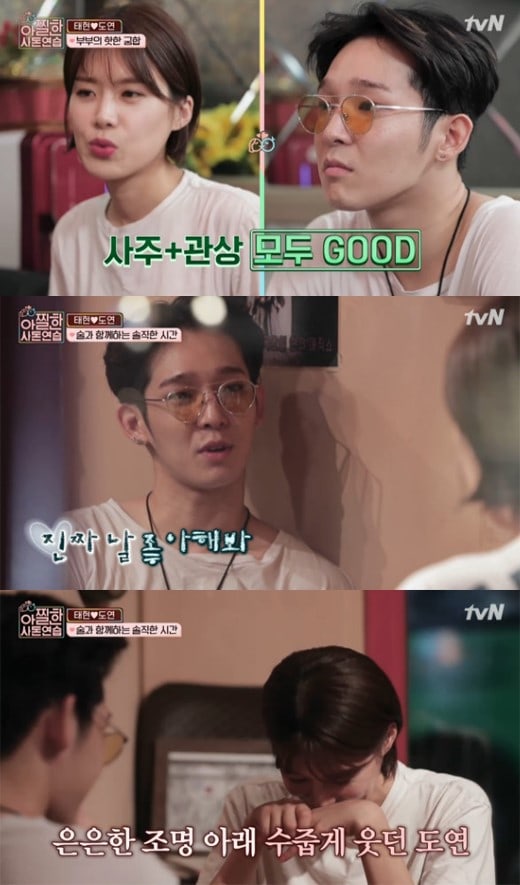 Also in this episode, Austin Kang and Kyungri enjoyed a date at his restaurant. He cooked carbonara pasta for her and she commented that it was delicious. While cooking the next dish, he misunderstood what Kyungri was saying and made her burst into laughter.

The couple sat down to talk and eat together. Kyungri admitted, “I don’t like to shake hands. I have hyperhidrosis (excessive sweating),” and Austin Kang became startled after remembering how he shook her hand at least twice after meeting her. Kyungri added, “We can’t hold hands, but I like to link arms.” When Austin Kang asked, “What about hugs?” she replied, “I really like them.”

Unlike the Nam Tae Hyun-Jang Do Yeon couple who spent their first night together, Austin Kang and Kyungri spent their day together by going on a date. Because a wedding was canceled due to the typhoon, Austin Kang was in a situation where he couldn’t close his restaurant on the night of filming. He didn’t have the heart to tell Kyungri to wait for him, but she offered to help.

Austin Kang felt grateful for her offer and told her that he had to go grocery shopping. He revealed, “It’s my dream to go grocery shopping with my girlfriend or wife.” He put on her helmet and draped an apron around her so that she could sit comfortably on the back of his scooter while wearing a dress. Seeing this, the celebrity moms praised his sweet manners.

Before grocery shopping, Austin Kang surprised Kyungri with a present. Thinking of how newlyweds hand out rice cakes to people around them after getting married, Austin Kang prepared rice cakes shaped like tuxedos and wedding dresses to tell others that they got married. 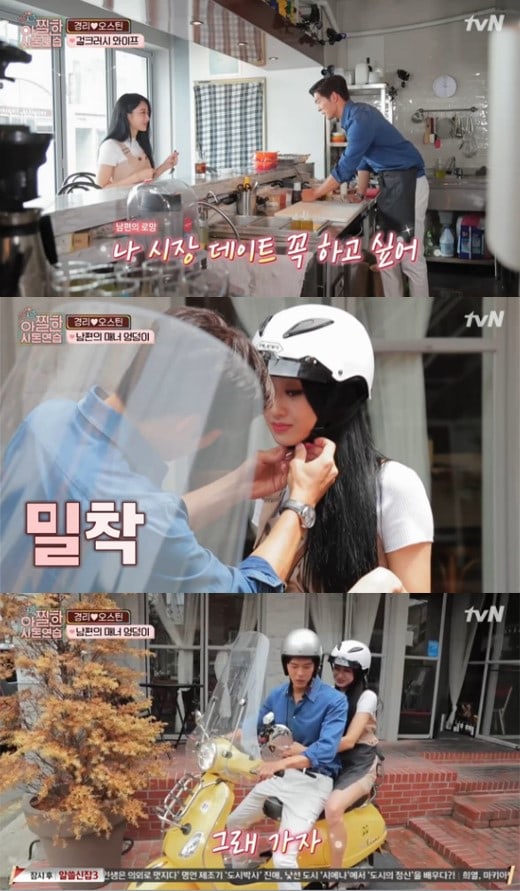 Nam Tae Hyun
Jang Do Yeon
Kyungri
9Muses
Austin Kang
In-Laws in Practice
How does this article make you feel?