Jimin was born in 1995 on October 13, and right at midnight KST on that day this year, Big Hit Entertainment shared a cute poster of images of Jimin and wished him a happy birthday.

Soon after, Twitter’s worldwide trends were already taken over by hashtags about Jimin’s birthday!

As of 12:40 a.m. KST, the top six worldwide trends were #HappyJiminDay (with over 1.1 million tweets), #지민_널만나고_사소한건없었다 (which means “Jimin, there’s been nothing trivial after I met you”), #JiminBornToShine, #지민은_천사가_남긴_기적 (meaning “Jimin is a miracle left by an angel”), #JiminOurAngelOurWorld, and his full name Park Jimin. 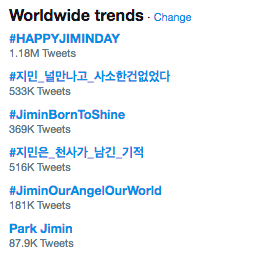 BTS also tweeted a video of the guys singing “Happy Birthday” to Jimin on the plane.

Check out some of ARMY’s tweets below!

jimin's birthday through out the years! i hope this years birthday i just as amazing jimin ♡ #HAPPYJIMINDAY pic.twitter.com/1mMz4rS9L1

? How do you feel everyone? Watching me grow? You've seen me grow since I was 19.

since today is jimin's birthday here's one of the most beautiful videos of him dancing ? #HAPPYJIMINDAY pic.twitter.com/e2m6fqS3zi

Happy birthday to the nation’s loudest and cutest fairy. Thank you for making my days brighter, I love you so much, stay healthy, happy, and loud. #HappyJiminDay #JiminOurSerendipityDay @BTS_twt pic.twitter.com/49ByvsC2PU