“Where Stars Land” tells the story of Lee Soo Yeon (played by Lee Je Hoon), a mysterious new employee at Incheon International Airport who harbors a special secret, and Han Yeo Reum (played by Chae Soo Bin), a clumsy but eager and hardworking employee who has been at the airport for one year.

In the beginning of the show, Han Yeo Reum experienced a crisis due to various incidents she ran into, but since meeting Lee Soo Yeon, she has been showing courage and is gradually developing as a character. 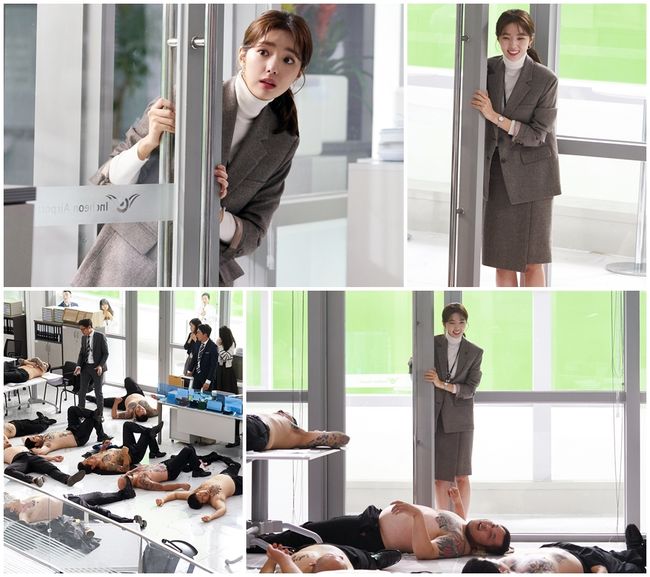 In the released stills, Chae Soo Bin removes her “accident-prone employee” label and aims to become a “problem-solving employee.” In the scene shown in the photos, gang members with tattoos all over their body approach Lee Woo Taek (played by Jang Jae Sung), the head of the transportation services department, but end up sprawled on the floor. Han Yeo Room bursts into the office and comes across the gang members. Although they look threatening, Han Yeo Reum, far from being scared, instead smiles at them and greets them brightly.

Moreover, this scene is reminiscent of a previous scene from one year prior, where the transportation services department called Han Yeo Reum a “human bomb.”

During the filming for the scene, Chae Soo Bin pushed the office door open and showed a “real reaction” of becoming astonished for a second before laughing at the scene of the gangsters laying on the ground. The actress was able to turn the chaotic set into one of a warm atmosphere with her hilarious reaction.

The production staff stated, “Han Yeo Reum, who had gained attention for being a ‘scene maker’ and the recipient of passenger service department executive Gong Seung Chul’s (played by Ahn Sang Woo) criticisms, will turn things around after being acknowledged for her response to the unexpected gang members. You can expect the ‘awakening performance’ of Han Yeo Reum, who will prove her worth.”

“Where Stars Land” airs on Mondays and Tuesdays at 10 p.m. KST.