Everyone had a great laugh thanks to Girl’s Day’s Sojin on tvN’s “Amazing Saturday.”

On October 13, Girl’s Day members Sojin and Yura appeared as guests to help the cast members guess the lyrics to songs.

The first song of the night was BTS’s “Fake Love.” When host Boom asked if he remembered this song, SHINee’s Key replied, “Of course I do. This song got No. 1 and we didn’t.” After Boom quickly apologized, Key added, “The juniors should now be [getting No. 1].”

Yura continued, “When fans asked her to sing ‘shy shy shy,’ she said, “Shots shots shots shots shots.'” They then showed a clip from a V Live broadcast when a fan asked her to do this and she sang LMFAO’s “Shots” instead, making the Girl’s Day members burst into laughter. Sojin commented, “That’s a famous song too!”

Getting up, Hyeri shouted, “We’re doomed today!” while Key laughed on the floor. When Yura explained to Sojin, “It’s ‘Fake Love,’ the opposite of ‘True Love,’ Sojin hid her face in embarrassment. 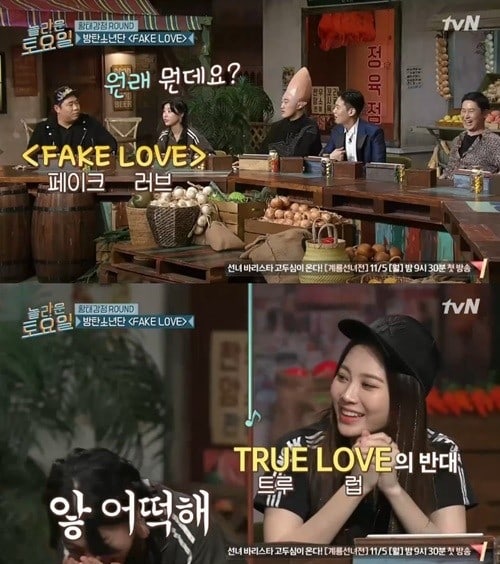