SBS’s “Where Stars Land” has released more teasers hinting at the relationship between Lee Je Hoon and Lee Dong Gun.

Lee Je Hoon plays the mysterious new hire at the Incheon International Airport (Lee Soo Yeon) and Lee Dong Gun plays the talented and ambitious leader of the management planning team (Seo In Woo). Although the two of them were like brothers in the past, a huge incident made them turn against each other. 12 years later, they end up as co-workers at the airport.

When they met in the elevator in a recent episode, they have a loaded conversation that make their conflicted history clear. Seo In Woo also seems to know the secret of Lee Soo Yeon’s right arm, adding another layer to their dynamic. 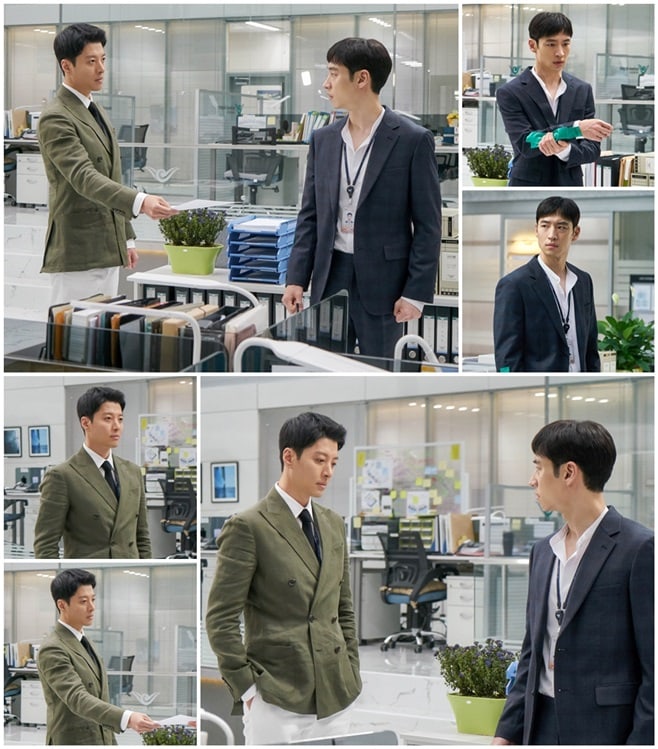 In stills released for the October 15 broadcast, Lee Je Hoon and Lee Dong Gun are alone in an office together. Lee Dong Gun is just passing Lee Je Hoon a piece of paper, a normal interaction among co-workers, but his gaze is cold. Lee Je Hoon, on the other hand, looks wary and nervous around Lee Dong Gun, who is still eyeing his right arm.

The production staff stated, “Lee Je Hoon and Lee Dong Gun created a strange atmosphere with their meeting in the elevator, and their conflict will continue to arise in upcoming episodes. Please look forward to their inevitable clash. There will be a battle of wits between Lee Soo Yeon, who is trying to keep his arm a secret, and Seo In Woo, who has found out all his secrets.”

You can watch the latest episode of “Where Stars Land” here:

Lee Dong Gun
Lee Je Hoon
Where Stars Land
How does this article make you feel?