tvN’s “Encounter” (formerly “Boyfriend”) will tell the love story of Cha Soo Hyun (played by Song Hye Kyo), a woman who has always been in the spotlight but has never truly been able to lead a life of her own, and Kim Jin Hyuk (played by Park Bo Gum), an ordinary young man who knows how to find happiness in the small things. An incidental meeting between the two, who appear to have nothing in common, ends up leading to a heart-wrenching romance that turns both of their lives upside down.

On October 16, the drama revealed its first stills of Song Hye Kyo in her starring role as Cha Soo Hyun. As the unhappy daughter of a prominent politician and ex-wife of the heir to a wealthy conglomerate, Cha Soo Hyun has always led a high-profile life, and she is all too familiar with the constant attention of the press and the public. The new photos show Song Hye Kyo looking poised and elegant, keeping her eyes calmly fixed on the ground even as chaos erupts around her.

However, even though Cha Soo Hyun appears to be leading a glamorous life as the head of a hotel, there is an unmistakably melancholy aura about her as she travels alone. Staring out the window of a car or quietly reading a book on a plane, Cha Soo Hyun seems as lonely as she is beautiful. 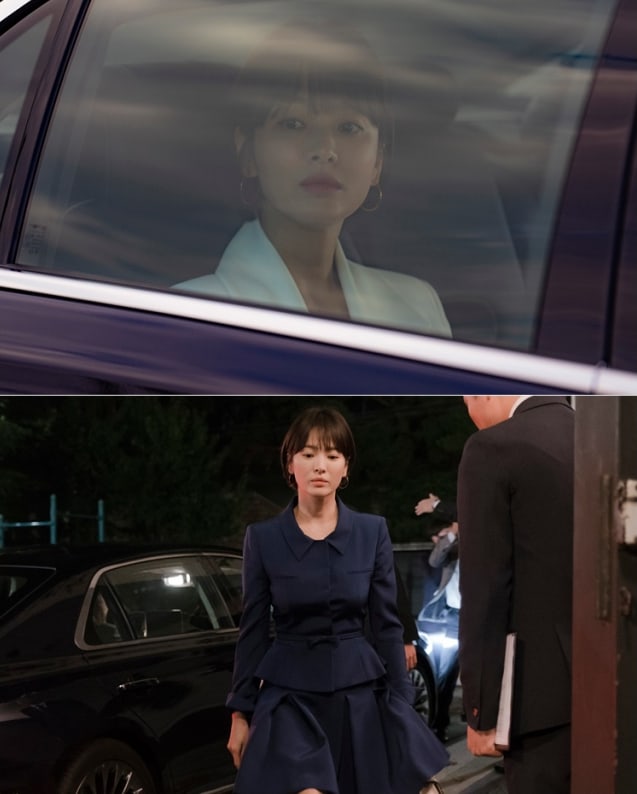 The producers of “Encounter” commented, “From the very first shoot, Song Hye Kyo instantly captured the attention of the entire crew with her deeply emotional acting and her remarkable aura.”

They went on, “We plan to make viewers’ hearts flutter with the love story that unfolds after Song Hye Kyo, who has lived her life trapped in a bird cage, meets the pure-hearted Park Bo Gum. We ask that you show a lot of interest and anticipation for ‘Encounter,’ which will knock on viewers’ living room doors this November.”

“Encounter” is currently scheduled to premiere in November, following the end of the mystery melodrama “The Smile Has Left Your Eyes.”

Song Hye Kyo
Encounter
How does this article make you feel?