iKON Shares Hilariously Honest Stories About Their Habits In The Dorm

iKON did not hold back on MBC Every1’s “Video Star.”

On the October 16 broadcast, all seven members of iKON appeared as guests on the variety show.

Junhoe began, “I am someone who consistently dyes my hair black. I want to have this hair forever.” B.I said, “I need to restore my health. My immunity is down,” and Bobby introduced himself as, “iKON’s No. 1 visual.” Chanwoo made everyone laugh by adding, “I don’t lose when it comes to mutiny.”

They participated in a “spill the tea” corner. Every time an iKON member spilled tea, he received a sticker, a chance to use the massage chair and to collect all of the members’ appearance fees.

Speaking about their hit “Love Scenario,” song composer B.I said, “I don’t know what song I made. I got chills seeing people sing the song at the Asian Games closing ceremony.” He continued, “I didn’t know the song would do so well. It was actually a song that was rejected. Yang Hyun Suk has a tendency to be forgetful. It was rejected at first, but he liked it when I sent it again, so the members recorded it together. It was a song that we were all satisfied with.”

After choosing Donghyuk as the dirtiest member, Yunhyeong explained, “When we lived together, Donghyuk never showered after practice.” Donghyuk said, “I thought that I should shower, but I would fall asleep while waiting.”

The members then revealed that Yunhyeong’s habit was taking off his clothes. Yunhyeong denied this, saying, “It’s because there are only two bathrooms in the dorm.” He added that when he sweats, he undos some of the buttons on his clothes because he wants to quickly shower. Junhoe joked, “Yunhyeong is healthy. In our group, he likes women the most.”

Junhoe continued, “We don’t have anyone we can call our visual member. That’s YG’s style.” Chanwoo commented, “I feel so sorry for him when he says that we don’t have a visual.” 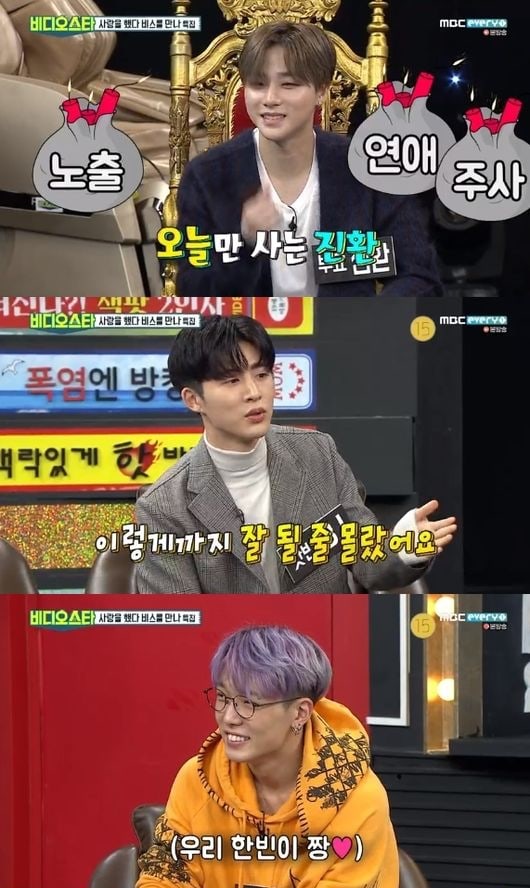 iKON also said that their dorm was where they spent most of their time. Donghyuk explained, “After our schedule ends, we have to wipe off our makeup and wash up. Our bathroom in the dorm is very spacious, so even if a member is using the toilet, we walk in. We talk about our day and share funny stories when we are inside the bathroom.” Junhoe added, “I went inside and Jinhwan was using the toilet. I sat in front of him and talked to him.” Jinhwan made everyone laugh when he added, “I told him to sit a little bit to the side and talk.”

Bobby continued, “It was my birthday when we were in Japan for a concert. We got really drunk and the four of us got into a small tub together to wash up together. The other two members took our photos.”

When the MCs asked Jinhwan about something he wanted to reveal about Junhoe, he said, “Junhoe walks out of bed naked and eats meals like that. The table is low, so he sits like this and eats. When you look at him from the front, you can see everything. I hope he’ll at least wear his underwear.” Junhoe agreed that he’ll wear underwear at least when he’s eating.

Talking about wanting to see Chanwoo’s naked body, Jinhwan explained, “When we all go to the bathhouse, Chanwoo always stays behind.” Chanwoo explained, “It’s not that I’m shy, but I wonder why we have to see each other’s naked body so often.” Jinhwan added, “I have seen the top half and his bottom half naked separately, but I want to see it all together.” Chanwoo joked, “Is this something I have to promise?” before saying, “I’ll come over to shower with Jinhwan.”

About Jinhwan’s drinking habits, Junhoe said, “There was a time when Jinhwan drank and slept inside of the security guard office.” Jinhwan explained, “I drank for the first time in a while and blacked out. When I opened my eyes, I was in the dark. I looked next to me and saw a kitchen knife. I was scared and ran out, and I was inside of a calm apartment building.”

iKON concluded by expressing their gratitude to Yang Hyun Suk. “Yang Hyun Suk monitors all of our music show broadcasts and gives us advice about dancing as a music industry senior,” said Donghyuk. “He told us to throw away our ambitions, be natural, and dance like how water flows. We screenshot these [messages] every time.”