The three celebrity couples enjoyed their honeymoon phase on tvN’s “In-Laws in Practice.”

On October 19, the dating variety program showed Jang Do Yeon and Nam Tae Hyun’s second day together. She told him that she would make him whatever he wanted to eat, and he asked her to make him braised spicy chicken.

In her interview, Jang Do Yeon said, “I can’t cook at all, but making breakfast is meaningful. Since I’ve been on the receiving end of it before, I think that I may be able to do it even if it’s my first time.”

Jang Do Yeon’s mission in making her husband breakfast got off to a rocky start. Even with the chicken right in front of her, she was unable to find it. After finally spotting the chicken, she put it in the boiling pot of water without washing it. She completed the dish by looking at the recipe, but it looked slightly different. Watching the footage at the studio, her mom commented that her daughter looked silly.

Nam Tae Hyun then tasted the chicken dish that she made. Giving her an odd smile, he commented, “It’s delicious.” In the interview, however, he revealed, “It wasn’t delicious. It didn’t taste weird, but it just didn’t have any taste.”

After breakfast, Nam Tae Hyun took care of Jang Do Yeon by giving her supplements. He said, “My mom gives me supplements every day, but I never take them. But I wanted to take care of my wife since I know it’s good for her. She made an effort to cook for me, and that’s what I thought of when I wondered what I could do for her.”

The couple headed out and met up with Yang Se Chan. Expressing jealousy, Nam Tae Hyun said, “You and Yang Se Chan get close to each other in [comedy] segments. I guess you guys are close. You guys even get physically affectionate.” The three of them grew closer by talking about Jang Do Yeon. 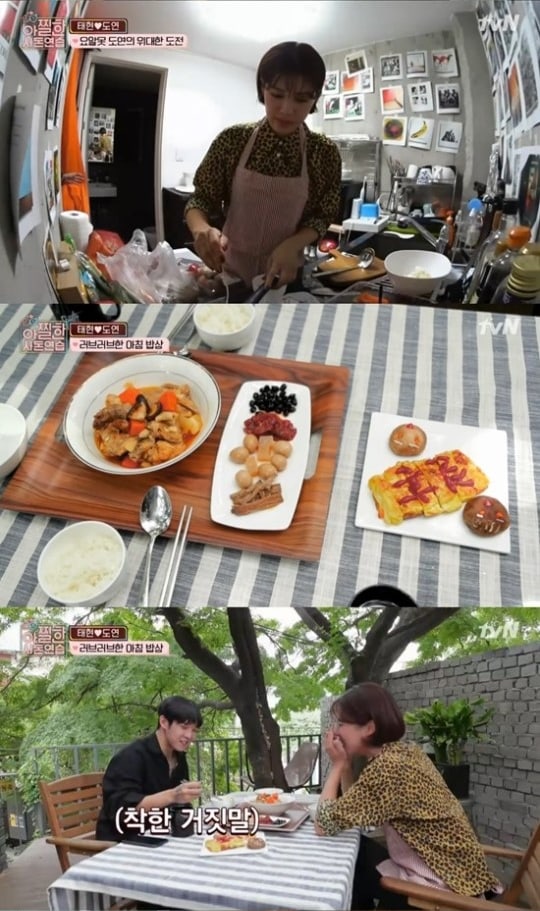 Kwon Hyuk Soo and Lovelyz’s Mijoo moved into their new home. She marveled at the clean house and interior design. “My favorite colors are red and blue, so I’m so happy to move into this kind of simple, sensible house,” commented Mijoo.

Kwon Hyuk Soo became happy after seeing her reaction. He said, “Just like how you feel proud when your family and friends like a hotel you choose during a trip, I thought, ‘It’s done,’ when I saw Mijoo’s reaction.”

Mijoo looked around the different rooms in the house. The couple acted out skits throughout the house and shared lots of laughs.

Jumping on the bed in the bedroom, Mijoo said, “Come on,” to her husband. He looked surprised and moved away from her. He commented, “I thought that the speed was not at the level of a supercar but teleportation. She was really pretty and cute.” About this, Mijoo explained, “He seemed really shy, so I said it half jokingly and half seriously.”

Kwon Hyuk Soo and Mijoo filled the house with their belongings. He brought a coffee machine, juicer, and a wine cellar used as a cosmetic cooler. After telling Mijoo to rest, he created a cake out of donuts. She smiled when she saw him walk in singing while holding the cake. During her interview, Mijoo said, “I think there will be many scenes of me laughing. He has good manners and is accepting of me.” 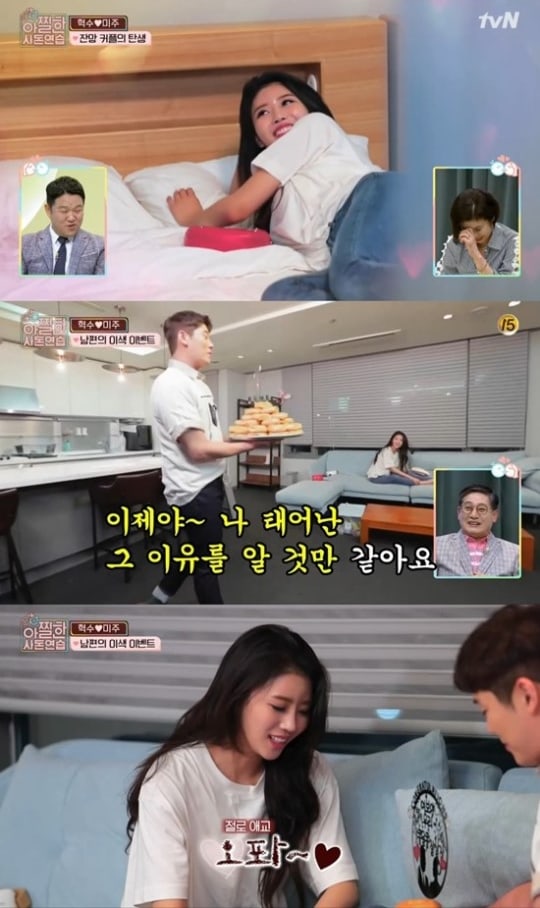 The final couple of the night was Austin Kang and 9MUSES’s Kyungri. In order to help him at his restaurant, she studied the menu and learned how to pour wine. Teaching her various things, he praised her by saying, “You’re doing a good job.”

Kyungri appeared nervous before approaching her first table of customers. She said, “I was so nervous. I felt so anxious that I kept looking at my husband.” In order to help her relax, he tried to make her laugh. With her husband’s support, she succeeded in taking orders, pouring wine, and serving. When customers praised Austin Kang’s handsome looks, she said, “It was interesting. I think people will go to [a restaurant] where there’s a handsome chef, but what can you do. He’s married to me.”

After work, Austin Kang called DinDin and Kyungri called fellow 9MUSES’s member Hyemi to come out. The four of them drank and talked. 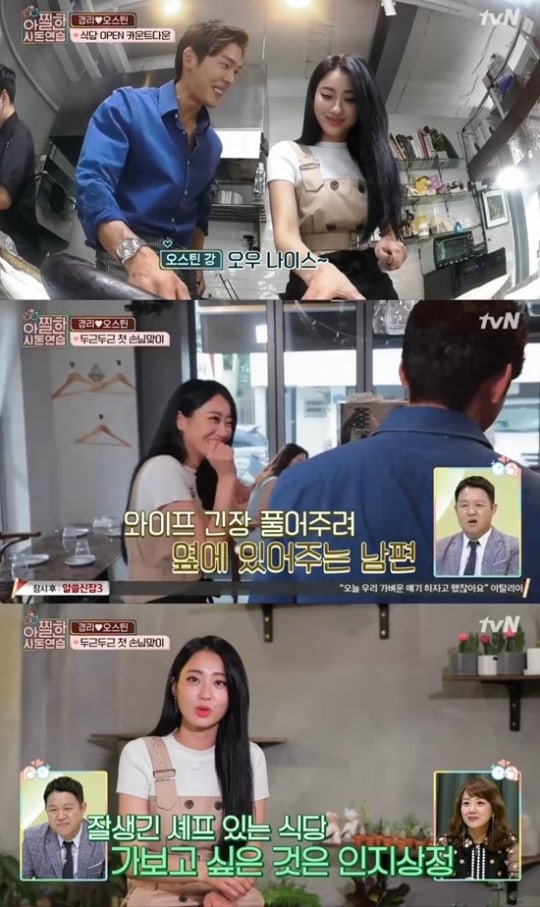