On the latest episode of “Amazing Saturday,” SHINee’s Minho had lots to say about his fellow member Key!

Minho and comedian Park Ji Sun appeared as guests on the October 20 broadcast of the tvN variety show, on which Key appears as a regular cast member.

When host Boom revealed that Minho had told the staff he didn’t want to sit next to Key on the show, Key jokingly replied, “I’m not that excited about [sitting next to you] either.”

Minho explained, “There’s a fixed order that we [SHINee] always stand in, and [Key] stands next to me. We’re always next to each other. Whenever we appear on a program or do anything together, we stand or sit next to each other, and he’s always by my side muttering and nitpicking.”

The cast members immediately agreed and sympathized with Minho, who continued, “And this is Key’s show. So I asked them to at least separate me and Key on ‘Amazing Saturday.'”

Shin Dong Yup commented, “If we hadn’t been on ‘Amazing Saturday’ together with Key, we wouldn’t have understood what [Minho] meant about Key’s nagging. But this show is practically Key’s ‘Amazing Saturday.'”

Girl’s Day’s Hyeri agreed, jokingly trembling to show how fearful she was of Key’s nagging. 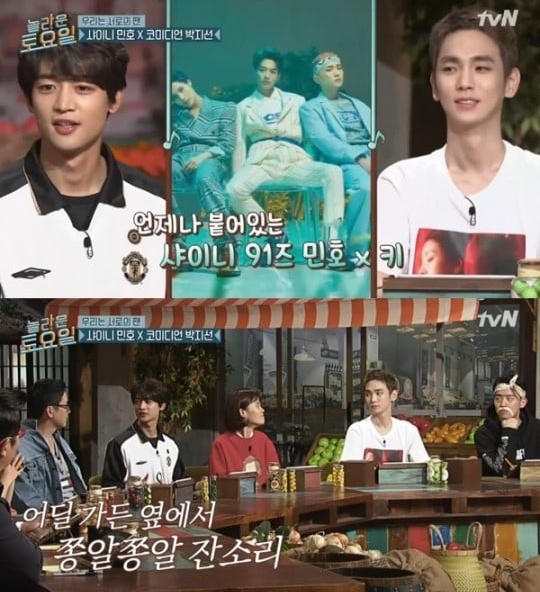 Minho then talked about how he’s an avid viewer of the show. He said, “I watch ‘Amazing Saturday’ because Key is on it, but there have also been times that I [unexpectedly] ended up watching it because of Key. He’ll bring his tablet, turn on ‘Amazing Saturday,’ and laugh out loud while watching it. He’ll keep talking about how fun it is, which makes you want to watch it [as well] out of curiosity.”

He teasingly continued, “One day, the volume was particularly loud. So I looked to see why he had the volume turned up so high, and it was an episode where he had done especially well.”

Key replied with a laugh, “I did it so everyone would hear. I laugh loudly on purpose. I find our program so entertaining.”

SHINee
Key
Minho
Amazing Saturday
How does this article make you feel?