The identity of Dongmakgol Girl has been revealed to be the leader and main vocalist of a girl group who has returned after a hiatus due to health concerns!

The episode of MBC’s “The King of Mask Singer” that aired on October 21 followed contestants as they battled it out to be crowned the king. Dongmakgol Girl was vying for her sixth consecutive victory and she had a tough challenge ahead as she went up against Giant Chestnuts of Bread.

Dongmakgol Girl was unsuccessful in keeping her throne, and Giant Chestnuts of Bread was crowned the new king of “The King of Mask Singer.” Dongmakgol Girl took off her mask to reveal that it was none other than EXID’s Solji. 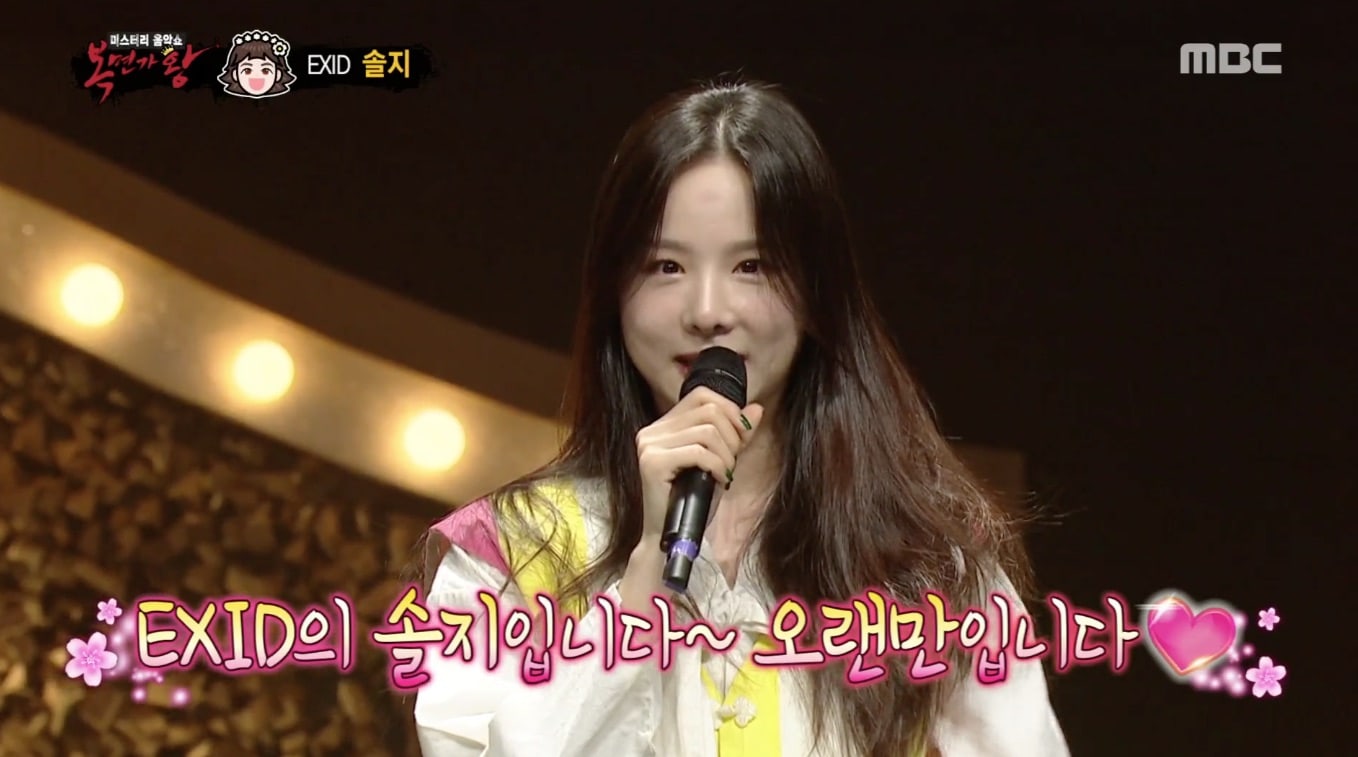 Solji had been on hiatus since December 2016 when she was diagnosed with hyperthyroidism. She underwent orbital decompression surgery in 2018 and has mostly been focusing on her recovery. It was announced in September that Solji would be returning to join the other members of EXID in promotional activities, and she has been celebrating her return by wowing viewers through “The King of Mask Singer,” her second time on the show.

Solji said, “The thing I thought about most [during my recovery] was returning to the stage. I wanted to return to ‘The King of Mask Singer’ because I received so much love here, and I unexpectedly found myself crowned the king.”

She shed tears as she continued, “All of the praise I received for every stage made me determined to work even harder. Thank you so much. I wanted to be crowned the king just once, but even after it happened, I couldn’t believe it.” Solji also stated, “The people who got me back on my feet whenever I was worn out were our fans. I kept telling them that I’d be back but even I didn’t know when that would be. Thank you so much for waiting for me. I will keep my promise that I will make good music.”

After the show, Solji took to her personal Instagram account to share her thoughts about appearing on the show. She said, “Thank you to everyone who has loved Dongmakgol Girl. Thank you to the viewers and the audience who gave me every precious vote and applauded me. Thank you to the celebrity panel who showered me with praise and support. Thank you to the ‘The King of Mask Singer’ staff who held my hands and welcomed me warmly. Though I may be very lacking, thank you for giving me more love than I deserve. Every moment I spent as Dongmakgol Girl has been full of so much happiness.”

She also spoke to her fans as she said, “And our loving LEGGOs! Thank you for always being by my side, and I’ll continue to feel thankful to you. Let’s stay together and keep going. I’ll become a better singer for our LEGGOs. I love you.”

Check out Solji’s latest performance and reveal below!

EXID
Solji
The King of Mask Singer
How does this article make you feel?