tvN’s upcoming drama “Mama Fairy and the Woodcutter” has unveiled the first look at its colorful supporting cast!

The drama has rightfully garnered attention for its lead actors, Moon Chae Won, Go Doo Shim, Yoon Hyun Min, and Seo Ji Hoon. However, they are not the only supernatural creatures in the cast!

“Mama Fairy and the Woodcutter” is based on a traditional Korean folk tale and tells the story of a fairy who has been waiting for her husband to reincarnate for 699 years. While working at a coffeeshop in the modern day, she finally meets two men who could be the one she’s been waiting for. 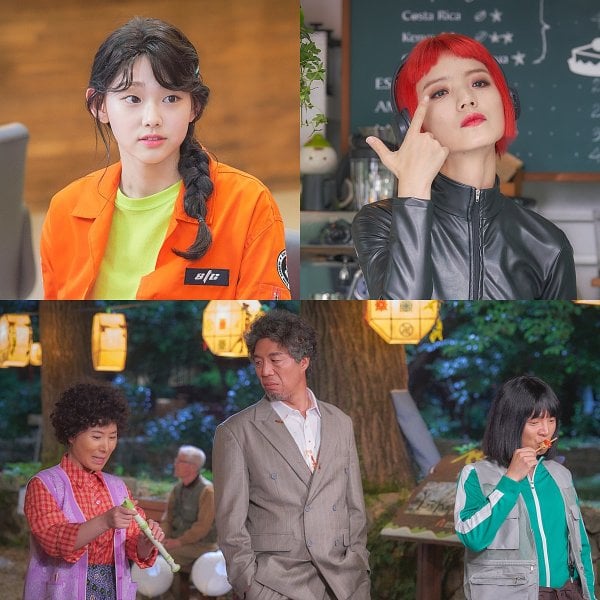 gugudan’s Mina was previously revealed to be playing the daughter of the fairy and the woodcutter. Although she was reincarnated as a tiger, she learns how to transform back into a human through training. She is also secretly a writer of steamy web novels.

Meanwhile, Ahn Young Mi has been cast as Jo Bong Dae, the owner of a coffee truck. Although she seems like a benevolent guardian deity, she is actually a tough god who returns good things a hundredfold and bad things a thousandfold.

Ahn Gil Kang, Hwang Young Hee, and Kim Min Gyu play the three spirits of Gyeryong Mountain. Ahn Gil Gang plays Teacher Goo, who looks like a fashionable gentleman on the outside but is in reality a Level 9 pigeon spirit. Hwang Young Hee plays a fairy like Moon Chae Won. 300 years ago, a woodcutter stole only her clothes and disappeared and she’s been looking for him ever since. Kim Min Kyu plays a sad spirit who frequently longs for his past life, when he had idol-like looks.

“Mama Fairy and the Woodcutter” premieres on November 5 and will be available on Viki. Check out the trailer below!