Jung So Min and Seo In Guk will become more entangled with each other when she discovers him bloodied and bruised in “The Smile Has Left Your Eyes.”

The tvN Wednesday-Thursday melodrama is about Kim Moo Young (Seo In Guk), whose fate is entangled with that of Yoo Jin Kang (Jung So Min).

During the previous episode, Seo In Guk asked Jung So Min, who was not honest with her feelings and wanted to close her heart, “Is it pitiful that you feel nothing? Or to be unaware of the feelings you have for someone?” Since then, Jung So Min ran towards Seo In Guk as if she made up her mind, but Seo In Guk was attacked by suspicious people.

In the released stills, Seo In Guk is lying on the cold, hard ground in an unconscious state with a bloodied and bruised face. Jung So Min clings onto him and shakes fearfully. In other photos, Seo In Guk is lying in the hospital. He’s still unconscious, and he has a neck brace on. Jung So Min is wearing an anxious expression, and there’s nothing but concern in her eyes for him. Viewers are curious as to why Seo In Guk was subjected to merciless assault by mysterious men, and whether he is facing a fatal crisis.

Seo In Guk appeared on the set after dressing meticulously for the “bloody figure” scene. He is said to have impressed the cast and crew by carefully checking the lines according to the detailed angle of the camera, and then closely practicing the script with Jung So Min.

The production crew stated, “During episode 7 [that will be airing] today [October 24], the whole story of Seo In Guk’s violent assault will be revealed. This incident will be a catalyst for Jung So Min to open her heart to Seo In Guk. Please check the live broadcast to see if they confirm their feelings for each other after the intense attraction.” 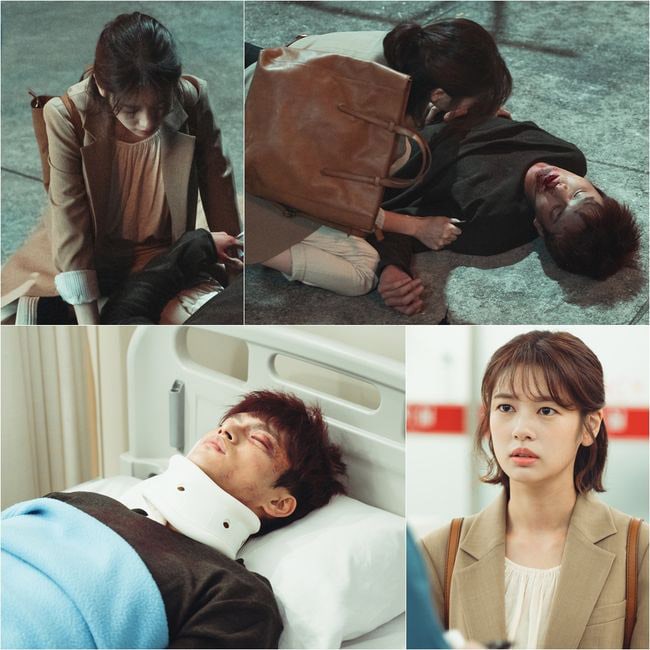