The 2018 Korean Popular Culture & Arts Awards on October 24 included many touching moments as recipients expressed their sincere thanks.

The annual ceremony presents awards from the government to artists in various fields who have contributed to the development of popular culture. The awards include Orders of Cultural Merit, Presidential Commendations, Prime Minister’s Commendations, and Minister of Culture, Sports and Tourism’s Commendation, and this year’s winners were previously announced.

Guckkasten frontman Ha Hyun Woo said, “We’re in our 18th year of doing this together after starting out as a band because we were curious about it. It wasn’t fast, but we quietly, slowly, and steadily came this far and are now receiving this meaningful award. We’ll be a band that persistently works hard as we focus on just music.” 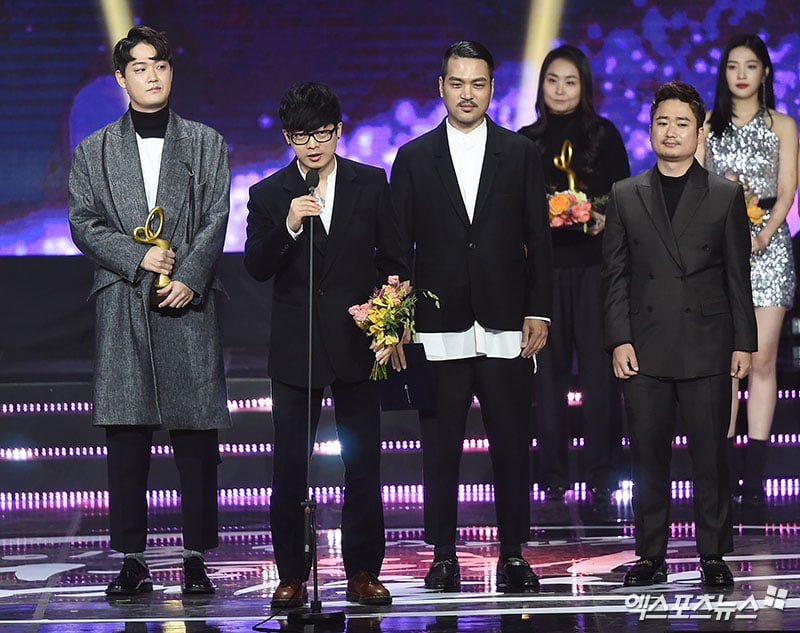 Red Velvet said, “It’s such an honor to be receiving the award along with senior artists that we respect. We’ll continue to work hard.” Park Na Rae stated, “Thank you so much for this award. In the future I’ll embarrass myself even more [to make you laugh.] Thank you.” 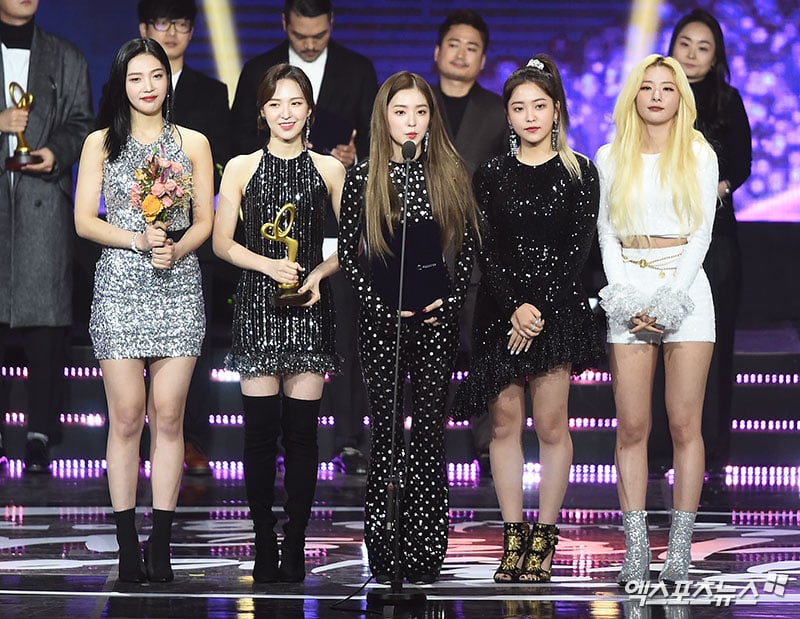 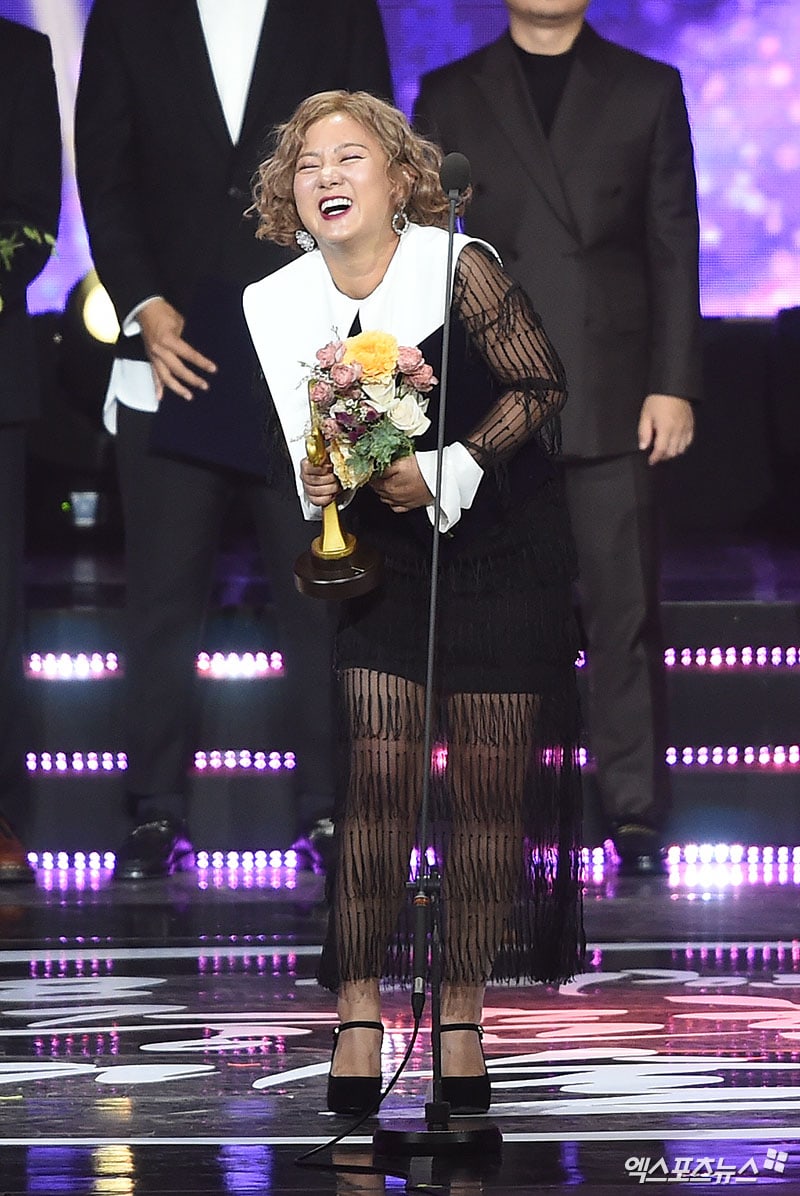 Lyricist Kim Ea Na said that the award’s weight was too heavy compared to the work that she’s done, promising to make up for its weight with her work in the future. 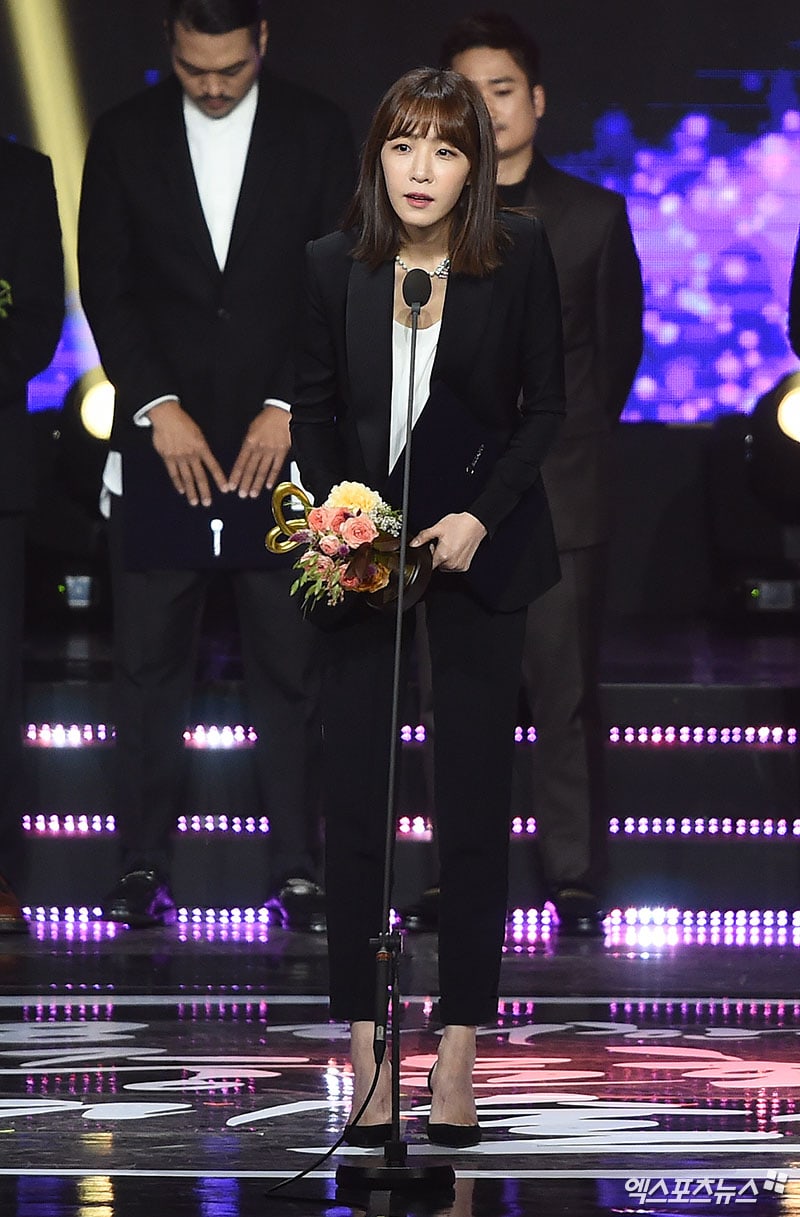 Namoo Actors director Kim Nak Joon received the award on behalf of Kim Joo Hyuk. “Next week, it will be a year since actor Kim Joo Hyuk left us,” he said. “It was his 20th anniversary since debut last year, and this award seems to be praising him for doing well during those 20 years. I think he is happy somewhere.”

Son Ye Jin received her commendation under her birth name Son Eon Jin, and she laughed as she said it was the first time she’s received an award under that name. “I think this is a message telling me not to forget my initial intentions,” she said. “I’ll show you many good performances.” 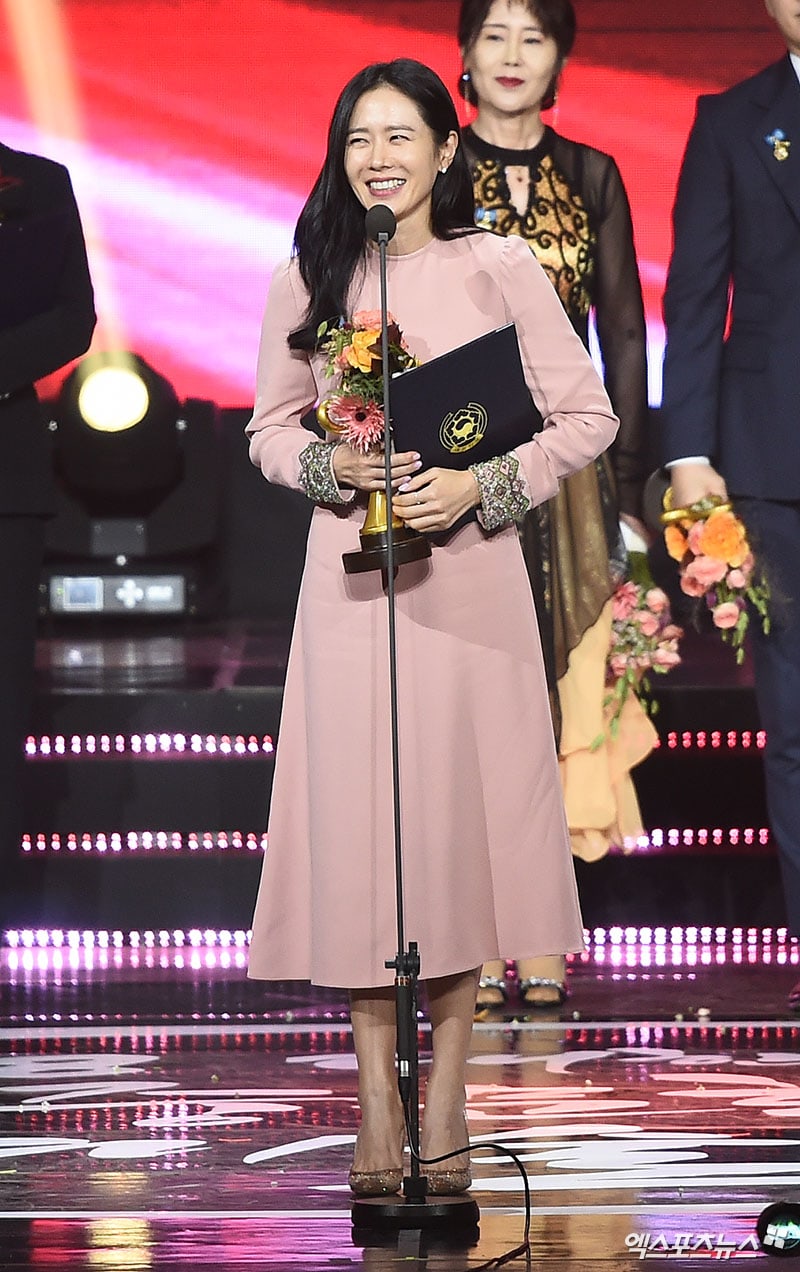 Lee Sun Gyun mentioned the cast and crew of drama “My Ahjussi” in his speech. “This is an honor, and thank you,” he said. “I express my thanks to Park Hae Young who created an incredible script, and Kim Won Suk who I want to be my life’s director. I don’t think of this as an award I’m receiving on my own. It’s an award that I’m receiving along with the ‘My Ahjussi’ team. I’ll share this honor with everyone who worked on it.” He also said that the honor belongs to his co-star IU, praising her performance in the work. 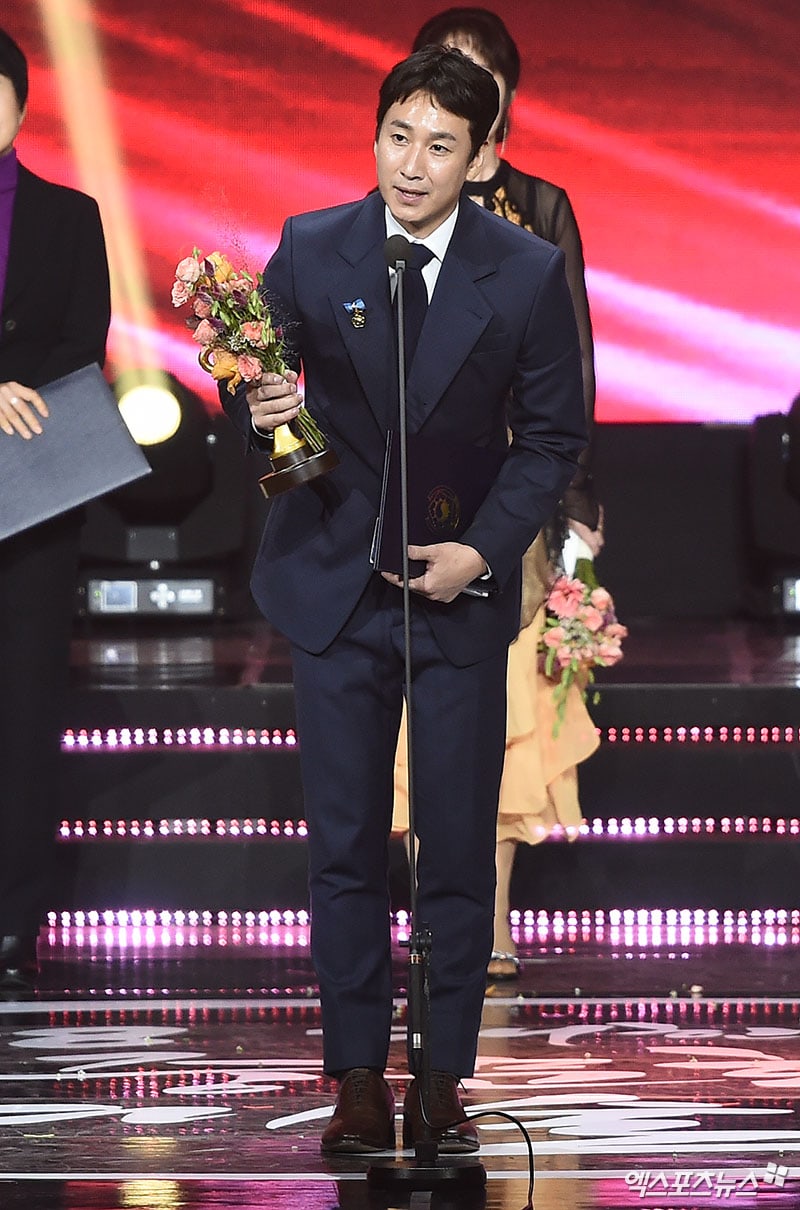 Jun Hyun Moo also expressed his thanks and shared how overwhelmed he was, as well as congratulated Park Na Rae and Yoo Jae Suk. He added, “I saw BTS in the waiting room so I’m feeling a little spaced out. It’s been a while, Namjoon [RM’s given name]. All we need is 30 minutes, so please come back on ‘Problematic Men.’ Anyway, I hope that BTS becomes even more successful.” 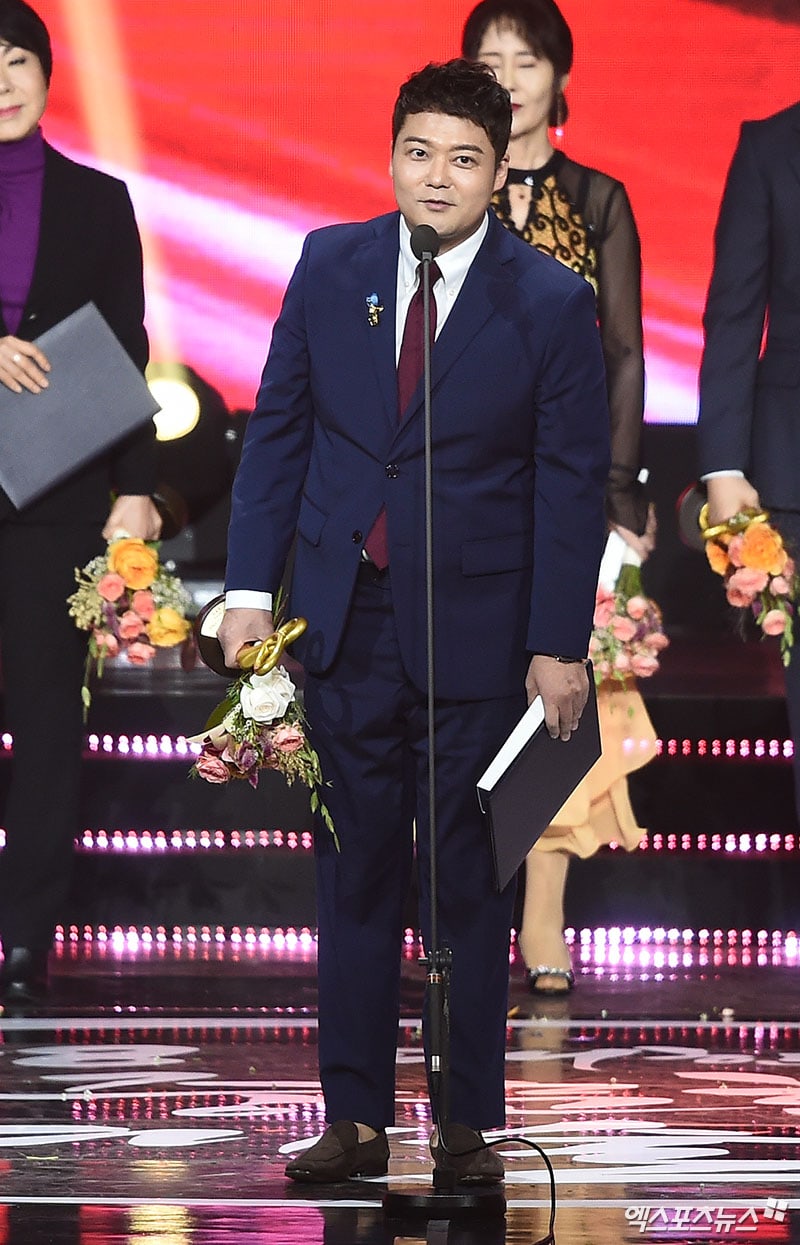 Kim Nam Joo promised that after receiving the award, she would try to self-reflect and perform more deeply, and thanked her children, husband, and mother. 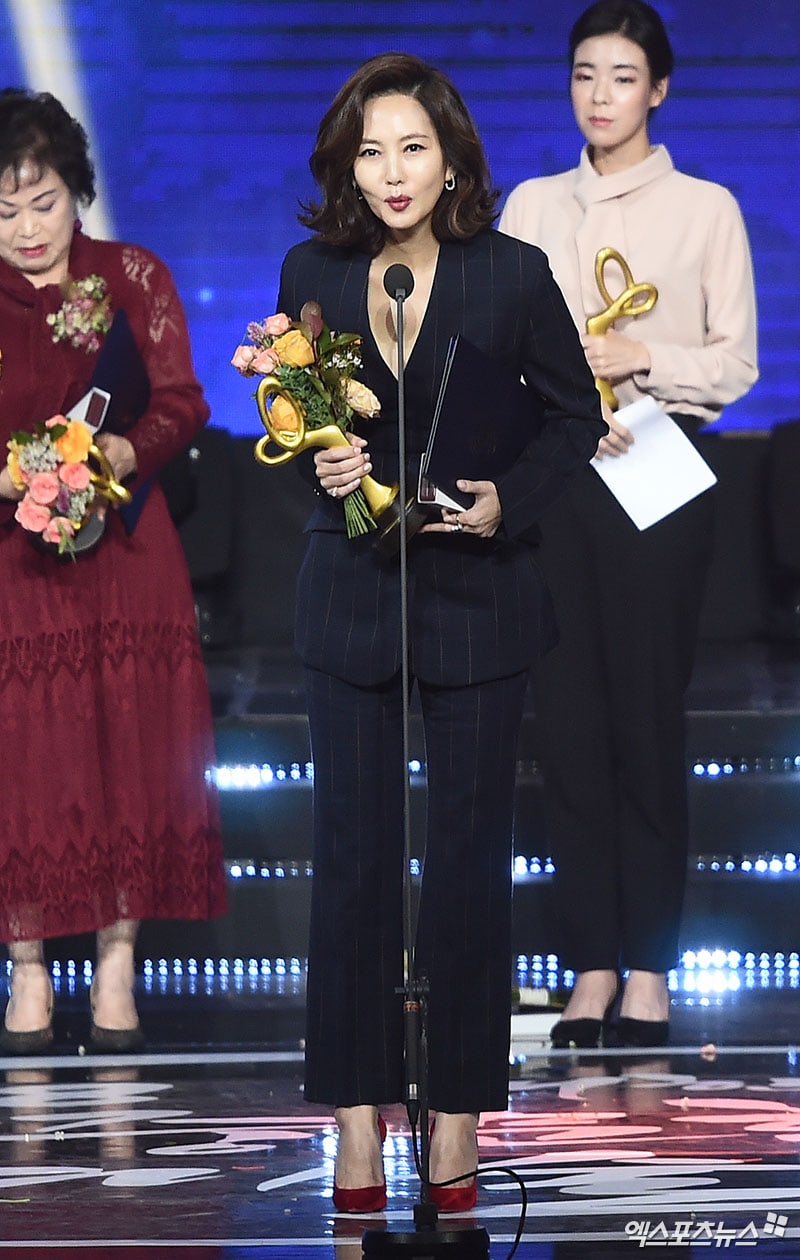 Yoo Jae Suk joked that he’d written a very long acceptance speech, and would cut it down to just a tenth of what he’d prepared. “I know what the work I need to do is,” he said. “I will make more people laugh. Thank you to the staff members and all of my colleagues.”

“Recently, my second child was born,” he added. “I’d like to take this opportunity to thank everyone who congratulated me.” He joked, “I wasn’t able to sleep because I was filming until late at night. I heard the baby crying in the middle of the night, but I pretended I didn’t and slept. I apologize to Na Kyung Eun. I won’t do that again. My wife, thank you and I love you.” 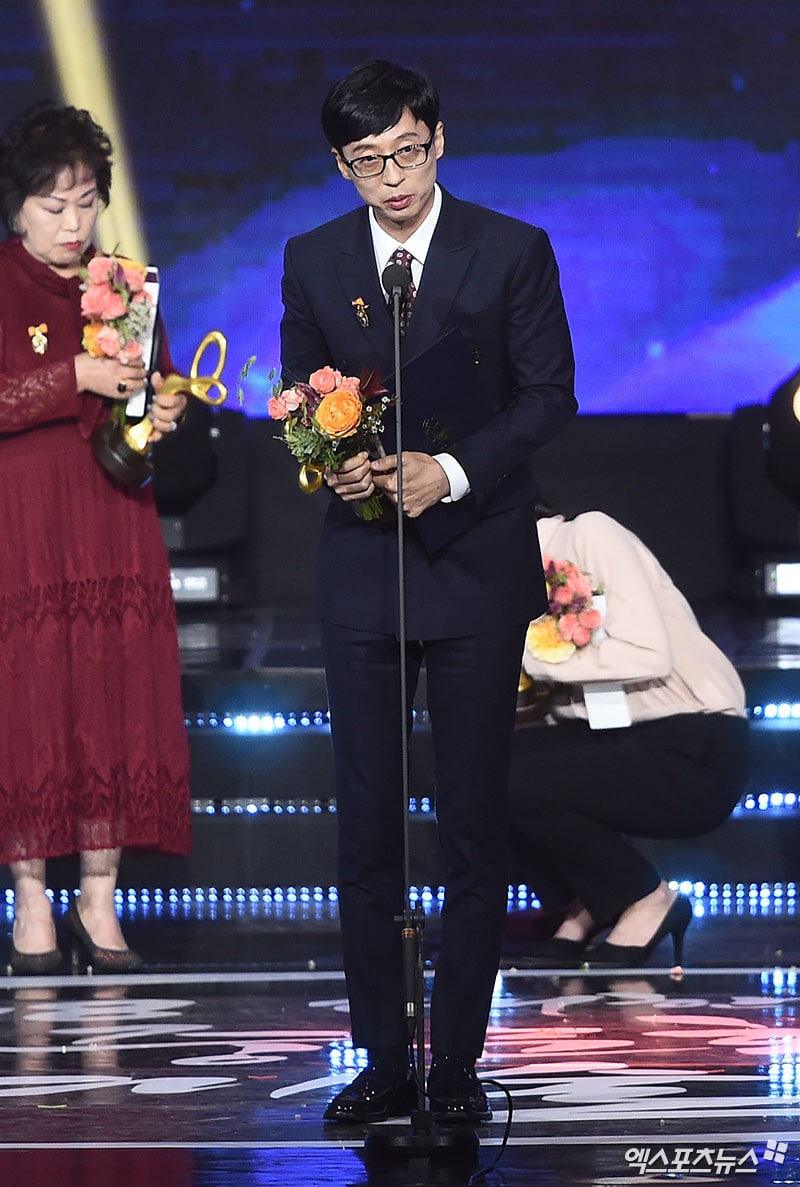 All seven members of BTS received Hwagwan Orders of Cultural Merit under their real names, becoming the youngest recipients in history. 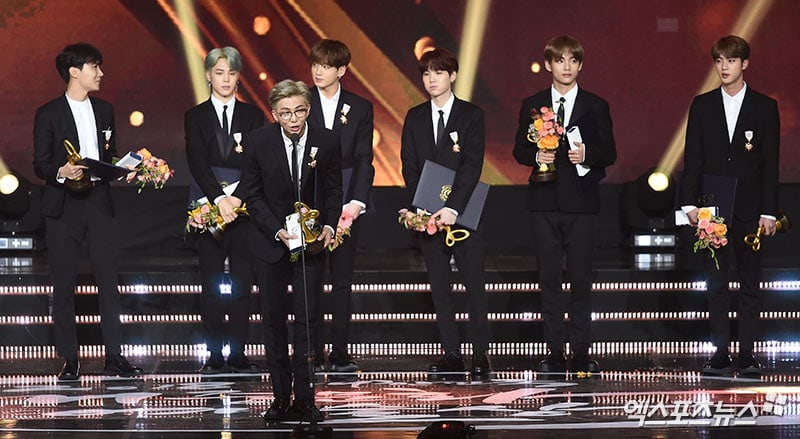 They took turns speaking at the ceremony, with leader RM first expressing his thanks and saying that he’d like to give his fellow members the chance to speak. “This honor belongs to all of our ARMY,” he stated.

Jin said, “Firstly, thank you so much for this medal. We’re often overseas, and many people sing along with our songs in Korean and tell us proudly that they studied Korean. It makes me proud. We’ll continue to try to increase knowledge about our culture.”

V began by saying he wasn’t sure how to express what he was feeling. “I think that my family will be very proud of me,” he said. “ARMY, I can’t express myself well, but I’m so grateful to our fans and I love you. I hope that everyone here experiences only good days.”

Suga described the medal as an honor for his family and said, “A lot of things have happened this year. First place on Billboard, the Billboard Music Awards, the AMAs, a speech at the United Nations. This medal is truly an immense honor. With the mindset of a representative of the nation, I will spread awareness of Korea throughout the world.”

The next member to express his thanks was Jimin, who said he felt as though his heart was about to burst. “This award is very meaningful because it came about thanks to the members, agency family, staff, and all of you working together,” he commented. “I want to say that this award is yours.” He also added that it was an honor to meet senior artists that he admires at the ceremony.

Jungkook stated that he feels that they don’t yet deserve the award. “However, I will accept it gratefully with the mindset that it’s a message for us to try harder in the future,” he said. “Thank you to our ARMY who always support us and believe in us, our families, and Bang Shi Hyuk.”

Lastly, J-Hope mentioned that he often introduces himself as “J-Hope, the hope of BTS.” He said, “I’m happy that it seems that we’re really becoming the hope of popular culture. The Hwagwan Order of Cultural Merit is such an immense award. It’s an award that carries weight and includes the hard work of many staff members, BTS’s blood and sweat, and the cheers of ARMY all over the world.” He added, “ARMY, I love you!”

After the ceremony, Jimin shared a photo of his medal on Twitter with the message, “This is an award that I received together with all of you. I thank you sincerely.”

Lee Soon Jae received a standing ovation from all the recipients as soon as he came to the microphone. He talked about how many people experience resistance from their families when they start out in the industry, and went on to say, “When I was in university, I saw famous actors when I watched foreign films. Those people were being recognized as great artists in their own countries. I was certain that acting was a form of art if it was done right, and so I worked hard for 60 years. I think I still haven’t reached the top and haven’t made any large contributions, but I’m incredibly grateful to be receiving such a great appraisal.”

“I will continue in the future,” he said. “I’ll take this as a message of encouragement to do everything I can, and will work hard and do everything I can.” He also joked that he had thought that BTS always performed in combat uniforms, as their name means “Bulletproof Boy Scouts” in Korean. “But now I see that they are very handsome,” he said. “They are beautiful and the pride of Korea.” He went on to also thank his wife. 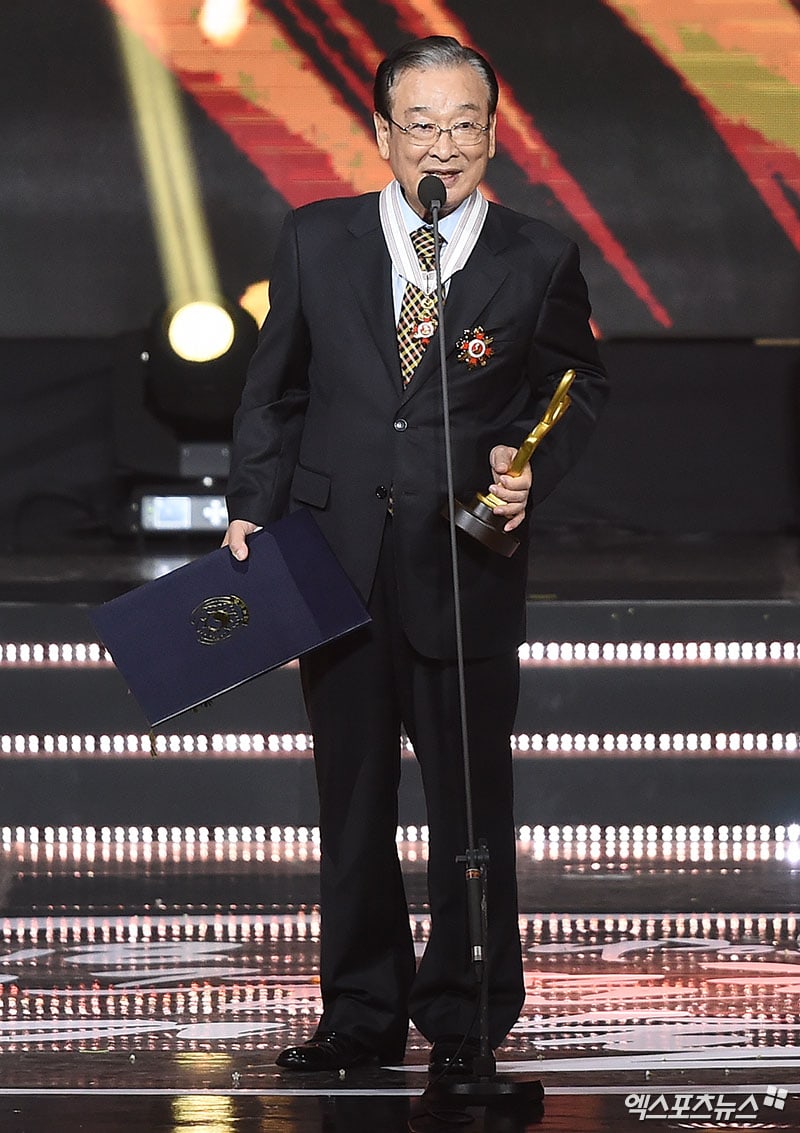 Congratulations to all the recipients!