On October 24, Song Mino and Im Soo Hyang appeared as guests and tried to find a family to eat dinner with in the neighborhood of Sungsoo.

Both celebrities previously appeared on the show. Im Soo Hyang appeared in January and recorded high viewership ratings of 7.2 percent. Song Mino made two appearances and failed both times, becoming an icon of bad luck on the show.

On his third attempt on the show, Song Mino said, “I’m going to succeed today.” When Lee Kyung Kyu saw the rapper, he joked to Im Soo Hyang, “Why did you appear with him and not Cha Eun Woo?”

Im Soo Hyang most recently appeared on the JTBC drama “My ID is Gangnam Beauty,” which also starred Lee Kyung Kyu’s daughter Lee Ye Rim. When Im Soo Hyang said, “I got really close with Ye Rim while filming,” Lee Kyung Kyu replied, “I watched all of it.”

She also commented that the father and daughter were very different, before adding, “I’ll be coming over Lee Kyung Kyu’s house soon. I’ll see you at home.”

Im Soo Hyang then talked about often looking at online comments, and getting hurt from malicious ones. She pointed out that one of the most hurtful ones was, “What kind of connections do you have to become a female lead? I hope I won’t have to see your face.” 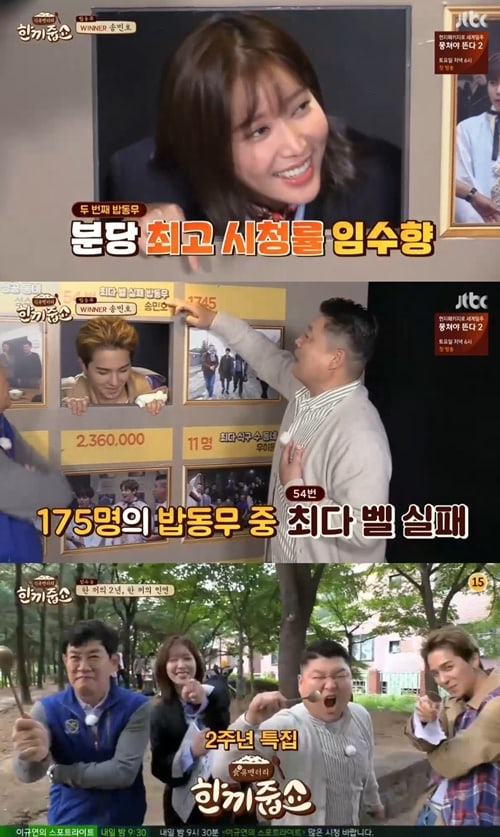 The four celebrities revisited the neighborhood of Sungsoo for the first time in two years. When it became 6 p.m. KST, Kang Ho Dong and Song Mino, and Lee Kyung Kyu and Im Soo Hyang paired off in search of a family to dine with.

Song Mino appeared to have a difficult time once again. The residents gave him cold reactions and he began to lose confidence. He commented, “I tried to be broad-minded, but I keep feeling small. I don’t have a good feeling.”

Im Soo Hyang and Lee Kyung Kyu succeeded at eating dinner with a Mongolian family. The homeowner said, “In Mongolia, you don’t turn away guests when they come [to your home].” They quickly got close with the four sons and played with them.

The WINNER member enjoyed a barbecue on the rooftop of a newlywed’s home. He commented, “This is heaven. I feel so much happiness.” When Kang Ho Dong asked Song Mino if he made future plans, he replied, “I always imagine my married life. A garden with a terrace is a must.”

“Let’s Eat Dinner Together” airs on Wednesdays at 11 p.m. KST.