g.o.d members had a touching reunion with their “son” on JTBC’s “Shall We Walk Together” (literal title).

“Shall We Walk Together” is a reality program following the g.o.d members’ trip as they take on the Camino de Santiago hiking trail in Spain.

On October 25, g.o.d sat under a tree to rest when they were surprised with a video call from a young man. He asked, “Can you recognize me?” and revealed himself to be Jae Min!

17 years ago, g.o.d starred in the variety show “g.o.d’s Baby Diary,” where they lived with and took care of a two-year-old baby named Jae Min. The variety program was loved by viewers and Jae Min became the “nation’s baby” at the time.

Jae Min is now 21 years old (by Korean reckoning), and said hello to the boy group members who once took care of him even before he could speak. He asked about his “mom” and the members handed the phone over to Son Ho Young, who had earned the nickname on the show for taking good care of Jae Min.

Son Ho Young said in disbelief, “Is that you Jae Min? Jae Min!” Becoming emotional at the young man before him, he said in a shaky voice, “Oh my gosh. What is happening? Leave your phone number with the staff.” 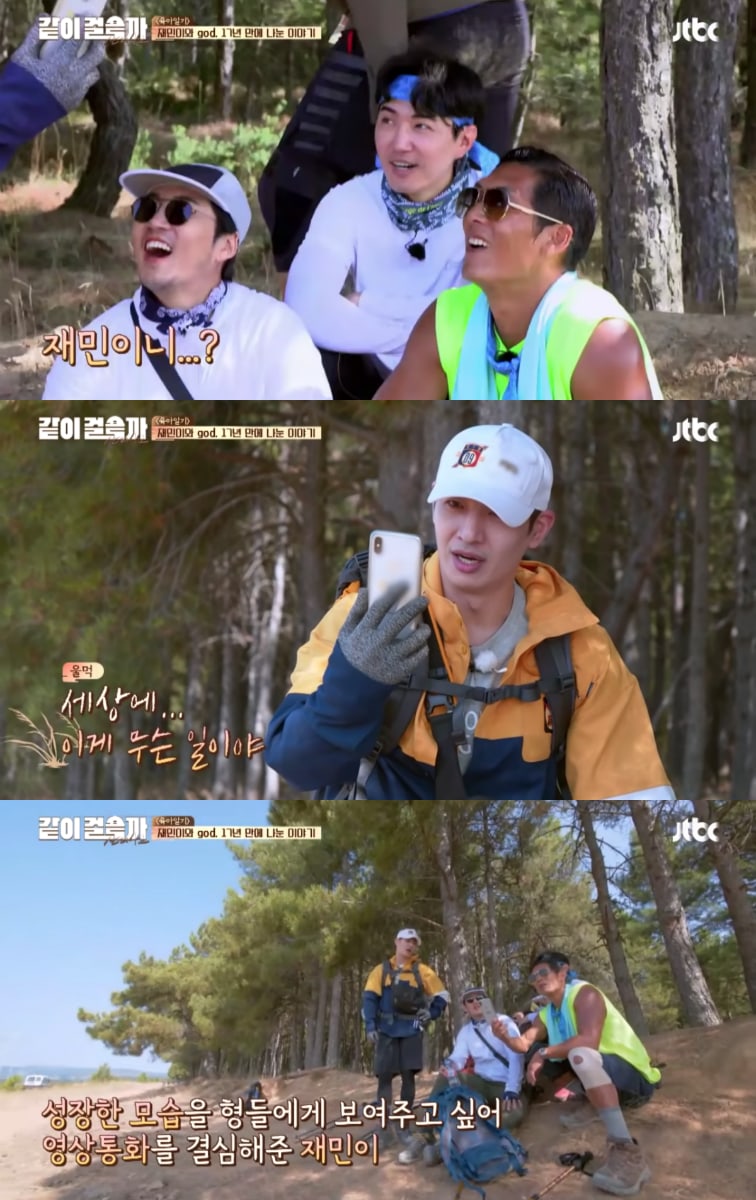 “I don’t know what to say,” he said as he handed the phone over to the other members. Yoon Kye Sang asked Jae Min, “Do you recognize me?” and commented on how well he had grown up.

He continued to ask, “Is your vision bad? You wear glasses with a high prescription.” Jae Min replied, “I wore glasses since I was in middle school.” Hearing this, Park Joon Hyung commented, “Is it because of us? Because we watched TV with him up close?”

Danny Ahn and the other members also said hello. The poor reception cut off parts of the conversation, but Jae Min revealed that there had been the possibility of meeting the members in real life through “Shall We Walk Together.”

A staff member explained, “We actually suggested that it would be nice if he could come and visit you guys for a day. He thought about it a lot, but he felt a lot of pressure about revealing his face, so he said he didn’t think he could come. But he said he wanted to show the members his grown-up face so we got to do a video call.”

Park Joon Hyung said, “Jae Min, when I usually see people, I say, ‘Yo bro,’ but I can’t call you a bro. I can’t say a lot because I have many feelings right now. Let’s meet in real life, eat, and talk together. Thank you for growing up so well. I’m so proud of you. Thank you so much for growing up well, without causing any trouble, and into a strong handsome Jae Min.”

g.o.d and Jae Min bid each other farewell and promised to meet up in Korea.

“Shall We Walk Together” airs on Thursdays at 11 p.m. KST. Check out the touching video call below!

g.o.d
How does this article make you feel?