On the latest episode of MBC’s “The King of Mask Singer,” the identity of “Projector” was revealed to be a former girl group member who has been pursuing a career in acting.

During the October 28 broadcast, “Projector” faced off against “Gramophone” in the first round of the singing competition. Together, they sang a duet version of the Bubble Sisters’ “Like a Fool.”

It turned out that “Projector” was none other than actress and former Rainbow member Hyunyoung!

Hyunyoung said, “This is my first time performing on stage after Rainbow’s promotions ended. I wanted to continue on the path of a singer, but it wasn’t as easy as I’d thought.” While shedding tears, she added, “I really missed singing on stage like this.”

The idol-turned-actress mentioned that she had recently undergone a surgical operation to remove vocal cord polyps. After revealing that she had developed dysphonia (a vocal disorder) as a result, Hyunyoung confessed, “[My vocal cords] are still not in very good condition. I’ve lost a lot of confidence in my singing [abilities].”

She continued, “I don’t think I’ve ever been this nervous before. [During my stage,] I was shaking like someone who drank 50 cups of coffee. I’ll work hard during my future promotions. Please give me lots of love and support.” 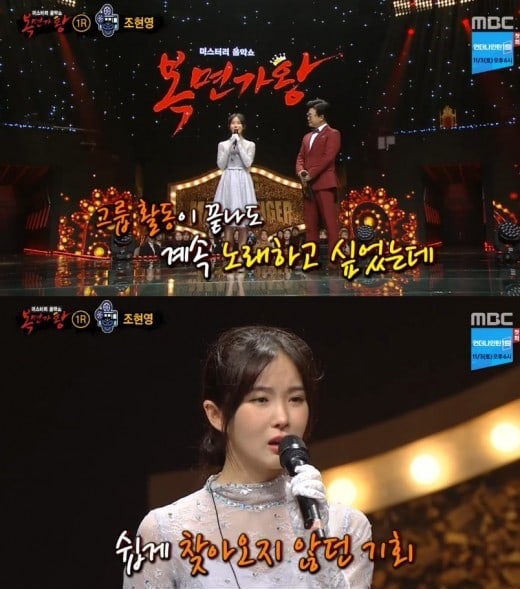 Hyunyoung later shared her thoughts on Instagram as well. In addition to posting a photo of herself with her mask, she wrote, “To ‘The King of Mask Singer,’ thank you for giving me a precious memory. I’ll never forget it for the rest of my life. To my parents and my fans who always cheer me on, thank you and I love you! From now on, I’ll become a Hyunyoung who doesn’t lose confidence and who works hard.”

Check out the clips of Hyunyoung’s performances below!

Watch the full episode of “The King of Mask Singer” here:

Hyunyoung
The King of Mask Singer
How does this article make you feel?