Claudia Kim On Her Character Nagini In New “Fantastic Beasts” Film, How Everything On Set Was Kept Secret, And More

Actress Claudia Kim spoke about the upcoming film “Fantastic Beasts: The Crimes of Grindelwald” and more in the October 29 episode of MBC’s “Section TV”!

Describing her character, she began, “I’m portraying a Maledictus and my character’s name is Nagini. She has a curse of turning into a snake and has the soul of the dark wizard Voldemort. In some way, you can think of it as an evil character and it may have the negative image of a snake, but author J.K. Rowling writes stories with unexpected twists. Nagini is someone with her own story and sadness, and a good friend of Credence. I’m so lucky to have such a good character.”

The interviewer asked her if there were difficulties she encountered while filming, since she had to portray an animal. Claudia Kim replied, “I don’t like snakes. I was scared of snakes, but I touched them because of this. Since Nagini is an important character in the ‘Harry Potter’ series, there was some pressure, but I worked hard to prepare for it.”

The scene where she transforms into a snake gathered a lot of attention worldwide. “It’s a scene where there was definitely the use of computer graphics, but an acrobat did the actual movements,” revealed Claudia Kim. “They bent backward and made their head reappear between their legs.” She laughed as she added, “These days, when I’m working out in Korea, people walk by me while imitating that scene.” 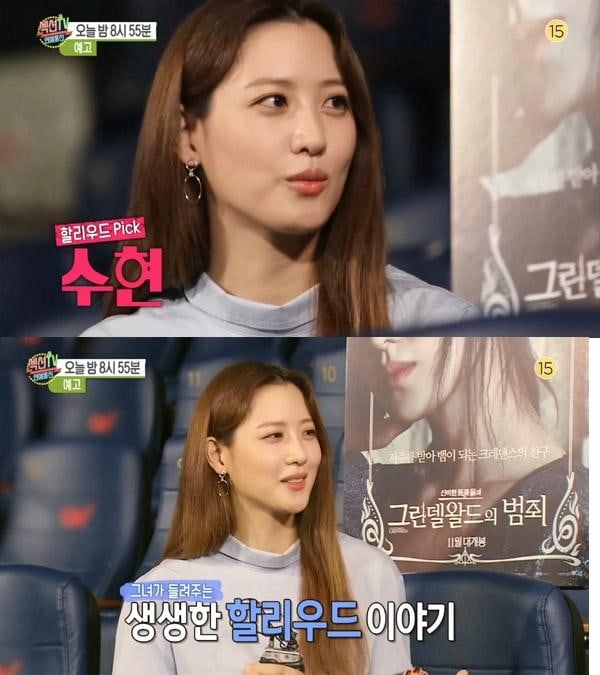 The film’s cast features names including Johnny Depp, Eddie Redmayne, Ezra Miller, and Jude Law. About working alongside this lineup of Hollywood actors, Claudia Kim said, “They’re actors whom I’ve liked and respected since I was young. Seeing them acting up close, each and every take was beautiful. I’m learning a lot while working as an actress.”

She named Johnny Depp and Eddie Redmayne as some of her favorite actors who she has been a fan of for a long time.

When the interviewer asked her about the workings of Hollywood and the level of security, Claudia Kim replied, “We didn’t use paper scripts for this film. We had an app that we used to access the script. If a new script came out on the day of filming, [the staff] took it back after filming. There were many paparazzi waiting to take photos of the costumes. In order to avoid that, a lot of trees were put in places like parking lots so that they couldn’t see us.”

Claudia Kim appeared in many Korean dramas before advancing into Hollywood. “At first, I also thought that it would be impossible,” said the actress. “But after letting go of even some of my own stereotypes, I thought, ‘Why not!’ You really only live once and I thought that I should go for it. Right when I was thinking about those things, I was offered an audition.”

The actress made her Hollywood debut through the film “Avengers: Age of Ultron” as Dr. Cho. About her “Avengers” co-stars, she commented, “They’re all easy-going. Scarlett Johansson and Mark Ruffalo both call themselves indie actors. That’s how humble they are even though they’ve accomplished so much, and it felt like we were just hanging out.”

Claudia Kim also touched on appearing on Netflix’s “Marco Polo” as a Mongolian princess and female warrior. She said with a laugh, “It was really physically difficult. I trained a lot. I did jujitsu, archery, horseback riding, boxing, and wushu. Even our days off were our training days, so I trained like an athlete.”

Revealed the secrets to her lean body, she added, “Keeping a regular schedule is important, so I’m trying to maintain one. I also exercise hard for my health.” She concluded the interview by thanking fans for their support and stated that she’ll be working hard in Korea and overseas.

“Fantastic Beasts: The Crimes of Grindelwald” will premiere on November 14 in Korea. Check out an episode of “Section TV” below!

Claudia Kim
Section TV
Fantastic Beasts: Crimes of Grindelwald
How does this article make you feel?