“The Kkondae Live” is a variety show where celebrities find out and talk about how much kkondae they have inside of them. Kkondae is a slang word usually used to describe an older person who lectures others.

Ren, who is one of the MCs of the show, joked about how his fellow “Produce 101 Season 2” contestant Lee Dae Hwi had scolded him for missing filming the second episode because of a pre-scheduled performance. “It’s not like I wanted to miss out on filming,” said Ren. “I really wanted to film too.”

Lee Dae Hwi replied that he had his own story about Ren, who told him not to tell the story while everyone else pleaded for him to spill the beans out of curiosity.

“I think it was a couple months ago,” began Lee Dae Hwi. “There’s a pop star that he’s really into these days, Lady Gaga. There’s a documentary about her and he kept telling me that I needed to watch it. I told him that I’d watch it later because I didn’t have time, but he kept insisting on it.”

He continued, “You know that insisting makes you a kkondae, right? When I told him that I didn’t have a way to watch it, he gave me his ID and password for a streaming website.” As everyone including Ren was laughing over the story, Lee Dae Hwi explained, “I watched it within 20 minutes while fast forwarding and then sent him a message. He then wrote back, ‘You fast forwarded it, didn’t you?'”

When the other MCs asked Ren how he knew Lee Dae Hwi fast forwarded the documentary, Ren explained, “I know how long the documentary is, so I calculated the time from when he said that he was going to start watching it. I wanted to check that he properly watched it.”

After listening to their stories, Lee Kyung Kyu concluded, “You’re both kkondaes because you both listen a little and talk a lot,” which made them both laugh. 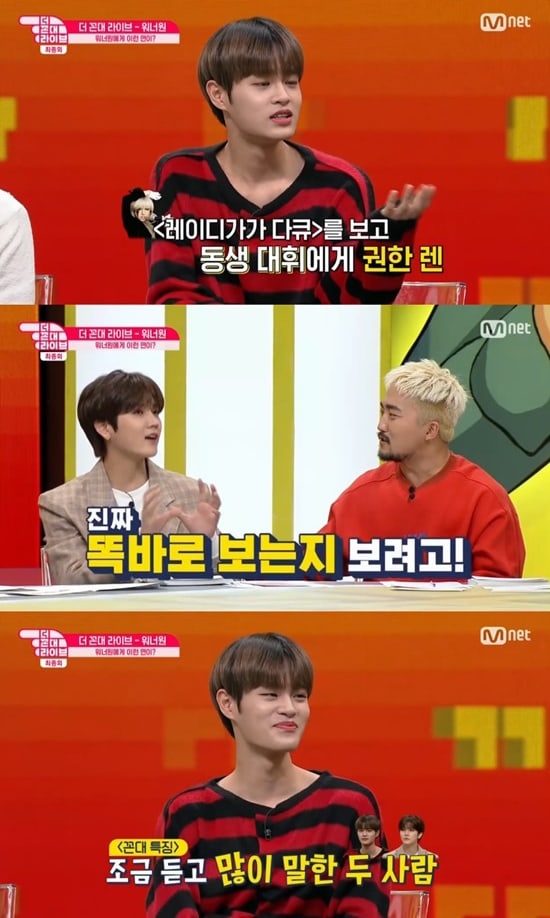 NU'EST
Wanna One
Ren
Lee Dae Hwi
The Kkondae Live
How does this article make you feel?