EXO’s comeback with “Tempo” is doing well on the charts!

The group’s new album “Don’t Mess Up My Tempo” was released on November 2 at 6 p.m. KST. By 2:30 a.m. KST on November 3, the title track “Tempo” was at No. 1 on the realtime chart of Korea’s largest music site Melon, as well as the realtime charts of other major sites Bugs and Soribada. Meanwhile, it reached No. 2 on Genie, Mnet, and Naver, with Paul Kim’s “Me After You” at No. 1. 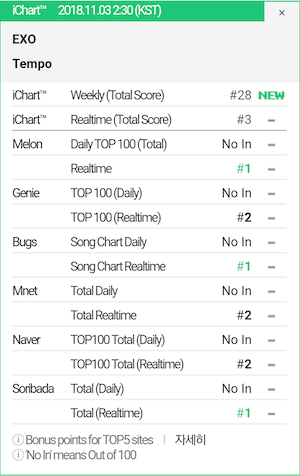 Congratulations to EXO! Check out some of fans’ best reactions to EXO’s comeback here.