Producing director (PD) Shin Hyo Jung talked about each of the “New Journey to the West” members, their strengths, and their notable moments in an interview.

tvN’s “New Journey to the West” began in September 2015 as a web variety show. With members Kang Ho Dong, Lee Soo Geun, and SECHSKIES’s Eun Ji Won a part of the show since the first season, new members have been added to the lineup over the years. Ahn Jae Hyun joined the show after Lee Seung Gi’s departure, while Super Junior’s Kyuhyun and WINNER’s Song Mino were added to the show during its third season. Soon after, Kyuhyun enlisted in the military, and Block B’s P.O joined the show for its fifth and sixth seasons.

Alongside PD Na Young Suk, PD Shin Hyo Jung has worked on the show since its inception. Despite changes in members, time slots, and much more, she has successfully brought the show to life. Thanking the viewers and sharing that she hoped that they would continue to make viewers laugh for a long time, PD Shin Hyo Jung talked about each of the members on the show.

Kang Ho Dong – The one who gets tricked the most

Through the recent two seasons, Kang Ho Dong earned two new legendarily hilarious characters — Kang No Face and the human watermelon. A stand-out moment for the emcee was when he unexpectedly and incorrectly answered ‘brassiere’ in a four-character game. He also showed amazing chemistry with the newest member P.O. 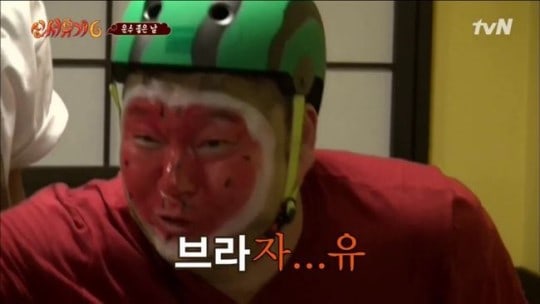 Shin Hyo Jung shared, “Kang Ho Dong’s strength is that he makes the new people stand out. He takes care of them without them knowing, and opens up first. Though he’s got a fierce character, he gets tricked the most. He’s the oldest member that opens up so that the younger members can come closer. That’s why P.O likes Kang Ho Dong so much. P.O wasn’t scared and approached him comfortably, so fun things happened. Kang Ho Dong also likes to appear cute rather than funny, so the Kang No Face and the watermelon suited him well. For the ‘brassiere’ answer, he was wearing the watermelon costume, and even his ears went red.”

Lee Soo Geun has always played a vital role in every season. From his spontaneous comments and witty adlibs, he is a true variety show genius. He boasts a wide range of skills, from kicking jegi (a kind of shuttlecock), to beating the others in music quizzes, and is especially known for his lightning-like ability to change clothes. In the most recent season, he made viewers laugh with both his body and wit. 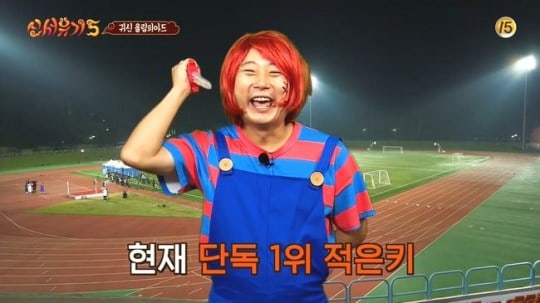 The PD remarked, “For the clothes changing mission, we should have ripped the pants to a moderate degree. But the production staff were ambitious and wanted to see a miracle happen. It was probably even harder because the pants ripped even more while they practiced. It was a bit regretful because it failed, but we got the swimming skit out of it. At the time, the other members were looking at the production staff, but Lee Soo Geun was maddeningly hilarious. He can use any moment and any object to be funny. I wonder how someone can be [that funny]. When we’re shooting and the time traveling to the next location gets long, we outright ask Lee Soo Geun to chat away. The expression that he flies around is perfect. He’s at his best no matter who he’s with. He makes it so that the person next to him is funny as well. He jokes spontaneously in any kind of situation.” 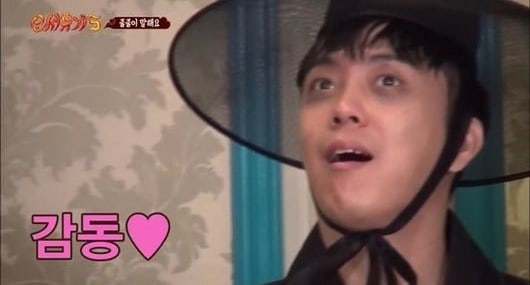 Shin Hyo Jung praised his instincts and variety sense, saying, “The production staff got goosebumps when Eun Ji Won predicted the results of the morning mission. When we come up with new games, we always focus on Eun Ji Won. He’s always had great instincts and used his head, so he’s great at inferring things. If he enjoys it, we think that it’ll do well. Eun Ji Won is also at the center of unpredictable situations. It’s because of him that we are able to show ‘New Journey to the West’-like games and editing. Eun Ji Won is also the standard of choosing games and restaurants. He has very clear reactions. When he’s on stage as SECHSKIES, even the production staff fall in love with him. However, on variety shows, he breaks his image and always is ready to be in costume. We’re thankful.”

Though the actor was quite new to variety shows when he joined in season 2, Ahn Jae Hyun has continued to develop his variety sense since then. Initially awkward with the format of a variety show, he quickly paved his way with his unpredictable comments and variety sense. In season 5, he especially made viewers laugh in the character naming quiz — he answered ‘hero’ instead of TVXQ’s Yunho, immediately declaring the table of food in front of them his funeral table, and failed to answer ‘Kyuhyun,’ responding with instead ‘Drunkard Cho.’ 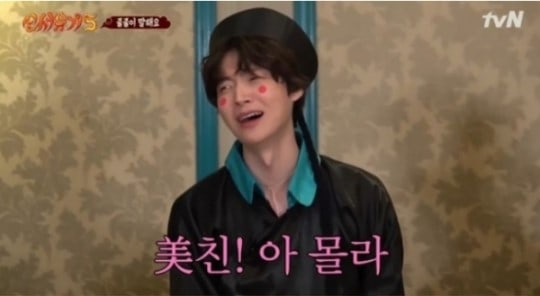 The PD commented, “To be honest, Ahn Jae Hyun is funny in every scene. I think he’s become more comfortable with variety shows. Because he’s an actor, there was some time for him to adjust to the format and games of a variety show. When other new members came, he held himself back, took care of them, and respected them. Seeing him stepping forward now, it looks like he has a lot more confidence. I think he also wants to be funny now. He doesn’t care if he doesn’t look cool, but gets upset when he isn’t funny. He puts on extra makeup and asks us if it’s funny. In season 6, he deliberately chose the peach because he thought it would be funnier. The blush on his cheeks got stronger every time, and he tied the stem of hair so that it would be funny. As a variety show PD, it’s really cool to see him do things like this.”

The addition of the WINNER member to the show was a stroke of fortune, for both the members and the production staff. A prime example of this is when he won multiple Lamborghinis for the members with his finger. Accepting the production staffs’ hilarious yet somewhat real pleas to negotiation, he single-handedly brought about the much-loved spinoffs “Youth Over Flowers – WINNER edition” and “Kang’s Kitchen.” 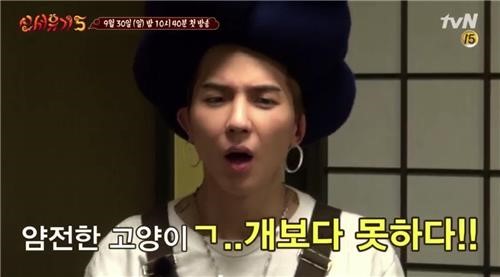 Shin Hyo Jung explained, “The members choose their own characters. So for Kang Ho Dong, we have to prepare each character’s costume in his size. However, we’re never worried about the makeup. It’s so easy because we have Song Mino. He’s really great with his hands, to the point where it’s unbelievable. He even won rock-paper-scissors five times in a row. He was really blessed by the variety gods. Thanks to Song Mino, we even had spinoffs like ‘Kang’s Kitchen.’ He’s a lucky charm that made the production staff fearful as well as happy.”

The biggest change to the two recent seasons was the addition of a new member, P.O., who joined after Kyuhyun’s enlistment. As someone who’s been in contact with each of the other members, he was the first person the production staff thought of as a new member. 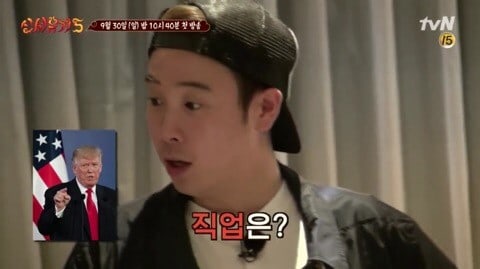 The PD shared, “P.O is really sociable. He joined when Kyuhyun left, so he could have felt awkward. But he took care of Kyuhyun, and mixed well with the other members. He’s also got a ton of aegyo in him. His chemistry with Song Mino is also starting to show, to the point where you can candidly see how they fought throughout the past 10 years. P.O was also a huge fan of ‘New Journey to the West.’ We didn’t have any other alternatives to new members other than P.O. I sometimes wonder who might have joined if P.O hadn’t.”

Kyuhyun – Waiting for his return

Though he’s currently enlisted in the military, Kyuhyun has made some kind of appearance in almost every single episode of the fifth and sixth seasons, as the members mention his name or the production staff plays his songs. His close friend Ahn Jae Hyun and P.O especially showed their affection for him, even shopping for gifts. In the character naming quiz, Ahn Jae Hyun hilariously yelled out, “Drunkard Cho” instead of “Kyuhyun,” showing off their special friendship. 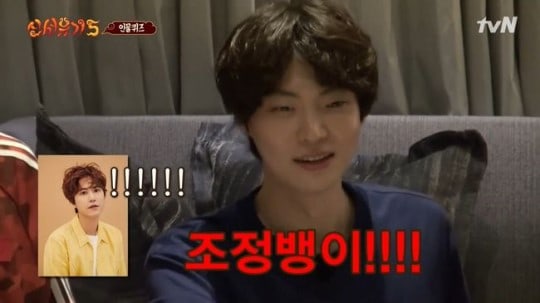 Shin Hyo Jung remarked, “We thought that the viewers would feel the empty spot that Kyuhyun left, and that’s because P.O took his spot. But rather than worry about someone who left, we decided to focus on the new member. So we focused on P.O, and we think that Kyuhyun will enjoy the mood if he watches the show. It’s a good thing if the viewers miss his presence, because it means that Kyuhyun did that much of a good job. The production staff just needs to keep up their editing skills, and make sure that we don’t get dumped when he returns. We’re also wondering if we’re supposed to give him appearance fees since he’s being mentioned so often.”

If you haven’t already, check out the fourth season below!