Kim Sun Ah will return as the lead for a mystery thriller drama.

MBC’s upcoming Wednesday-Thursday drama “Children of Nobody” (also known as “Red Moon, Blue Sun”) is a mystery thriller drama which will tell the story of a woman who tries to solve a mysterious case by using a poem as evidence.

On November 5, the drama revealed photos of Kim Sun Ah, who will play the lead role of Cha Woo Kyung. Kim Sun Ah looks shocked and hurt as she is sitting next to a car in a road full of smoke. The scene shows both bright lights and dark shadows, and Kim Sun Ah’s achromatic colored cloths as well as her messy hair add mystery and tension to the captured moment. 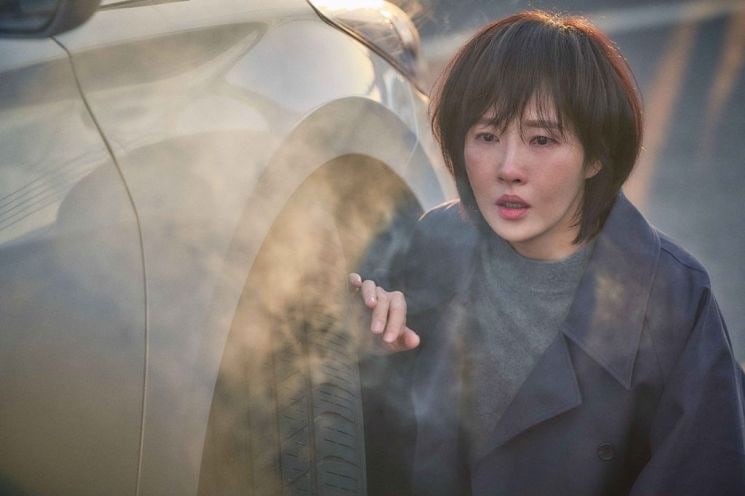 Kim Sun Ah’s character Cha Woo Kyung is a good daughter to her parents and a diligent wife to her husband. She lives a perfect life as a counselor for children. She will get swept up in a series of mysterious incidents as the drama’s plot continues. Her character requires a strong but delicate change of emotions due to the character being in the center of all of the incidents.

The production team of the drama revealed that Kim Sun Ah’s power to perfectly synchronize with the character and lead the plot by showing great attention from the first filming session awed the staff members. Therefore, there is much anticipation from viewers as to how Kim Sun Ah’s acting skills and passion will be portrayed in the drama.

“Red Moon Blue Sea” will be directed by PD Choi Jung Gyu, who directed MBC’s “Splendid Politics,” and is written by Do Hyun Jung, who wrote “Que Sera Sera” and “The Village: Achiara’s Secret.” The drama will premiere in November, after the finale of “Terius Behind Me.”

Check out Kim Sun Ah’s latest drama, “Should We Kiss First?” on Viki below!

Kim Sun Ah
Children of Nobody
How does this article make you feel?