The November 8 episode of KBS 2TV’s “Happy Together 4” was a SM Entertainment special, with special MC Lee Soo Geun, BoA, SHINee’s Key, EXO’s Baekhyun and Sehun, and NCT’s Taeyong and Jaehyun as guests.

During the broadcast, Lee Soo Geun asked what the story was behind Sehun not being able to move houses because of Yoo Jae Suk.

Sehun explained, “While we were filming something else, I told him, ‘Hyung, I’m moving.’ He said just one thing in return, ‘You haven’t bought a TV yet right? I’ll buy it for you.’ When I told him that it was alright, he said that he should do at least this much for his juniors.” The EXO member joked, “But I still haven’t heard anything from him so far.”

When Jun Hyun Moo asked when he moved, Sehun playfully replied, “I still haven’t been able to.”

In response, Yoo Jae Suk expressed, “Sehun told me that I didn’t have to when I told him I would buy him a TV, saying it would be burdensome.” When Sehun commented that Yoo Jae Suk had insisted despite that, Yoo Jae Suk agreed, “It’s true. I had the last word.”

BoA commented, “Sehun could buy a TV and Yoo Jae Suk could just transfer him the money.” When Yoo Jae Suk said the price didn’t matter, BoA suggested to Sehun, “An 80-inch screen is about 10 million won [approximately $8,900].” Lee Soo Geun chimed in, “If you’re going to buy him that, I heard there are TVs where it seems like someone is dancing right in front of you. They’re 32 million won [approximately $28,500] these days.” 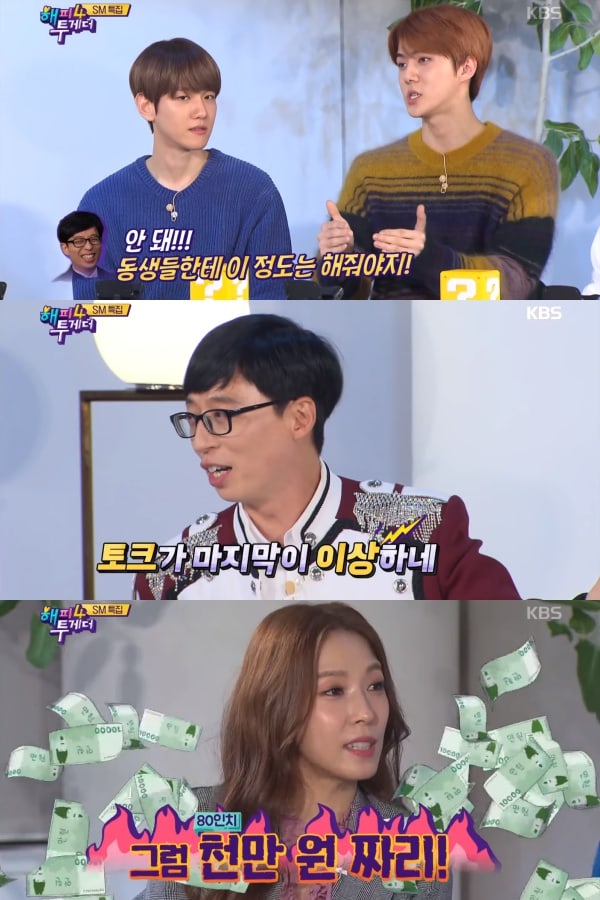 Yoo Jae Suk later revealed a hilarious follow-up conversation he had with Sehun during a break.

Sehun had been asking for advice on how to be entertaining while talking, and after reassuring him, Yoo Jae Suk expressed that his TV offer was sincere.

EXO
Yoo Jae Suk
Happy Together
Sehun
How does this article make you feel?