Ilhoon said, “It’s nerve-racking to be on the show alone without a guest,” He added, “I feel this way even now, but when I first started I remember thinking again and again that I really needed to do well. Now that it’s been a month, I think I’m more comfortable with everyone.”

He thanked the listeners for their support and said, “I always meet with people who are waiting outside the MBC radio studios. I think that it’s due to good luck that I have a daily opportunity like this.” 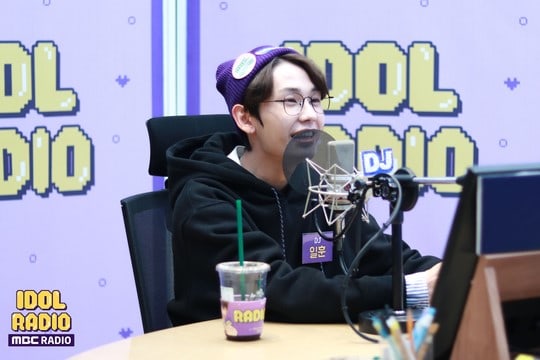 During the show, he decided to directly call his fellow BTOB members. Before he made the calls, he said, “I’ll make a bet. If no one accepts my calls, then I’ll make BTOB’s appearance next week last for 2 episodes.” The goal of the call was to make the member say, “I’ll buy it for you.”

The first member he called, Minhyuk, didn’t pick up. Going in order of age, Changsub was the next to be called, and this time he picked up almost right away. When Ilhoon said he was on “Idol Radio,” Changsub said, “Of course, I know” and claimed that he had been listening to the broadcast. When Ilhoon tried to get him to say “I’ll buy it for you,” Changsub caught on to the mission right away but didn’t get the exact phrase.

Next, Ilhoon called Hyunsik, who first made everyone laugh with the greeting, “Who is this?” It turned out that he had been lying in bed and had thought the call was for an advertisement. Once again, Ilhoon mentioned, “I would like it if someone bought me a chair” and Hyunsik replied innocently, “Like who?” However, he gave the correct phrase in the end.

Then Ilhoon called Peniel, but the call had to be terminated because Peniel was driving. Yook Sungjae, who was next, didn’t pick up when Ilhoon called him the first time but picked up almost immediately when he tried again. Unlike the others, Yook Sungjae knew even before Ilhoon said anything that there was a mission involved in the phone call. Though he also had trouble getting the exact phrase right, he got it in the end, but quickly added, “I don’t actually have to buy it for you, right?”

BTOB
Ilhoon
How does this article make you feel?