Mnet’s rapper survival show “Show Me the Money 777” has announced the winner in this year’s finale!

The finale aired live on November 9, with three rappers remaining and the prize money of 200 million won (approximately $176,870) on the line. The “Show Me the Money 777” top three line-up included Kid Milli (under Team Code Kunst and Paloalto), Loopy (Team Code Kunst and Paloalto), and nafla (Team Giriboy and Swings). The winner was determined 50 percent by live text votes, and 50 percent by votes from the studio audience.

The three rappers took to the stage for the first round, and their performances included some special guest artists. Kid Milli performed his new song “Boss Thang” with Young B of “High School Rapper.” nafla’s performance of “Buckle” included the surprise featuring artist Zico of Block B.

When the results of the viewer voting for the first round were revealed, nafla was in first with Kid Milli in second and Loopy in third. The rappers then went on to perform in the second round as their final chance to show their talents on the show. A special guest performer in this round was Loco, who joined Loopy for his performance of “V.”

In the end, it was revealed that the winner was nafla, with Loopy coming in second and Kim Milli in third. nafla said “I want to give this honor to my friend Alex who is watching from heaven. Giriboy and Swings went through such a hard time during ‘Show me the Money.’ I don’t even know how many songs I made with Giriboy. You worked hard.” His comments brought Giriboy to tears. 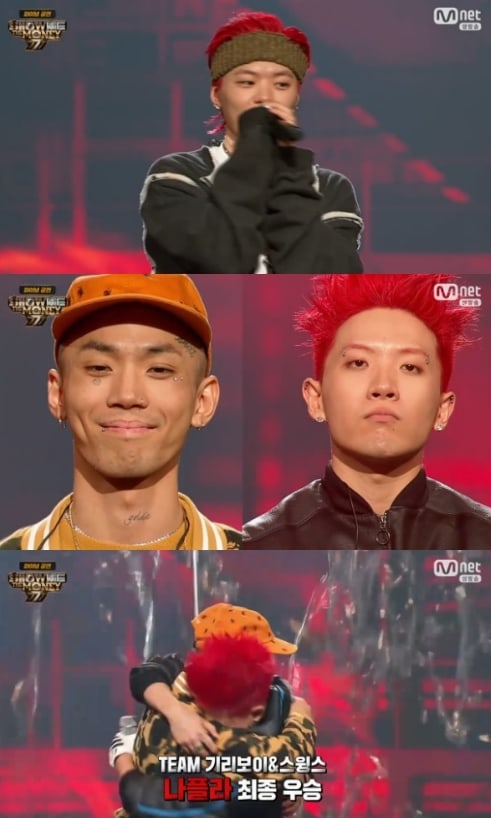 nafla
Show Me the Money 777
How does this article make you feel?