2018 MGA Apologizes After Criticism Over Korean Map Used During Ceremony

The 2018 MBC Plus X Genie Music Awards has issued an apology after coming under fire for failing to include contested territories in a map of the Korean peninsula used during the ceremony.

This year was the award show’s first ever event, and the ceremony took place on November 6. During the event, a graphic was used that showed a weather report featuring the members of TWICE on a map in the shape of the Korean peninsula.

However, the map did not include the islands of Ulleungdo or Dokdo (also known as the Liancourt Rocks). South Korea controls the islands but Japan contests the country’s sovereignty over them, and this is a further source of strain between the two countries. 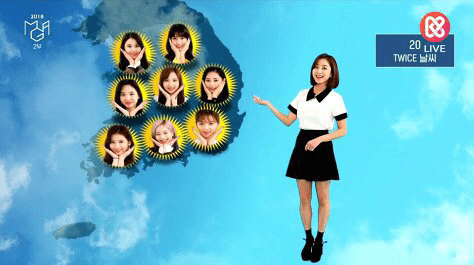 On November 9, the Genie Music website posted the following statement:

“During the broadcast of the 2018 MBC Plus X Genie Music Awards ceremony on November 6, Ulleungdo and Dokdo were omitted from a screen that depicted the Korean peninsula.

“MBC Plus is correcting the error and quickly working on replacing it.

“Once again, we bow our heads in apology to those who watched the broadcast, and we will take care so that this kind of incident does not occur again.”

The reaction to this statement online has been largely negative, with many commenters questioning whether the omission was really unintentional. It has been pointed out that there were several Japanese artists and guests at the show that the hosts may have been trying to avoid upsetting.

This has occurred at a time when there is particularly high political tension between South Korea and Japan. The South Korean Supreme Court ruled last month that a Japanese company must pay compensation to four Korean workers who were forced laborers for Japan during World War II. The Japanese government has insisted that matters of compensation were entirely settled in a treaty signed in 1965, and the two countries are currently at a standstill. Many observers have viewed the recent postponement of BTS’s appearance on the Japanese show “Music Station” as linked to this strained political climate.

2018 MGA
How does this article make you feel?